In a major ruling, the High Court has ordered that commercial buildings not be allowed in residential zones in Bangalore from now on. The court passed the interim order on January 25th in a case filed by Citizens’ Action Forum (CAF), Sadashivnagar RWA and 12 individuals in 2008. Petitioners had challenged BDA’s Revised Master Plan (RMP 2005-2015), based on which land use zones are demarcated. A division bench of the court lead by Chief Justice Vikramjit Sen asked the government to go back the city’s master plan of 1995-2005 for limits on commercial activity in residential areas.

News of this emerged first when an email urgently summarising the interim order was sent by Vijayan Menon on January 25th afternoon on the Save Koramangala mailing list. Menon is a member of Citizens Action Forum, a city based federation of civic groups and is one of the key petitioners on the litigation. Very quickly, it got forwarded onto other lists run by civic acivists and the word was out.

The verdict, despite being an interim one, is a stunner, especially for frustrated citizens in Bangalore. Civic champions from Rajrajeswari Nagar to Koramangala to Sahakarnagar and Whitefield have long since railed that the city has come under rampant and even reckless commercialisation, lead to gobbling up of land. Bangalore has also witnessed a pushback from civic champions, both in the courts and on the streets, wanting to restore sanity.

At the heart of the litigation is the concept of mixed zoning that was introduced in the current RMP (Revised Master Plan 2005-15) . Mixed zones could have commercial buildings in areas that were previously marked as ‘residential’ in BDA’s 1995-2005 CDP. The High Court ordered that such commercialisation should be stopped and that residential areas mentioned in the ’95 CDP should left as such, going forward.

Advocate for petitioners Aditya Sondhi, speaking to Citizen Matters over telephone, says that officials will have to abide by the order from this week. 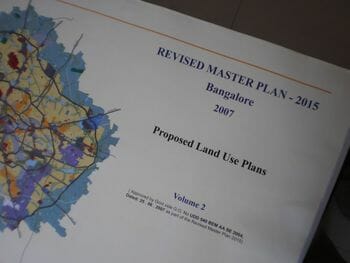 The Bangalore Revised Master Plan 2005-15 volume 2 is very large sized, weighty and hard bound document that may require two people to carry. It costs Rs.5000 to get it at the BDA. Pic: Meera K.

Koramangala-based Menon, is pleased with the order. "Within a residential zone there can be specific areas where some kind of commercial activities can happen, but it cannot happen everywhere. Wthout the requisite infrastructure in place (water, sewage, roads, public transport), an area cannot and should not be commercialised, leading to a living hell", he says.

Dr A Ravindra, former Karnataka chief secretary, ABIDe member and chairman of the government-appointed committee in 2009 that studied commercialisation of residential areas, was also stunned at the order. "The RMP is a statutory document and city cannot go back to 1995 in legal terms. It is not clear how the order will be implemented. I have to study the order first", he says. "Mixed zoning in RMP was introduced partly to regularise what had already happened (1995-2005)", surmises Ravindra.

In the PIL filed in 2008, the petitioners, all Bangaloreans, had challenged the Karnataka state government’s approval of the RMP itself. It pointed out that no development plan for the city could be formulated without the involvement of BMRDA, as per BMRDA Act. The BDA got involved in formulating the RMP and the BMRDA was not. Also government ignored changes to the draft RMP recommended by BMRDA, petitioners had claimed. Also, the public had filed about 7,200 objections on the draft.

The then state government had constituted a review committee under P S S Thomas, Former Advisor to Planning Commission, to look into the plan. The committee disagreed with proposed zonal regulations, designation of roads in residential areas as commercial axes etc. But the draft was approved ignoring all these, allege petitioners.

Menon however, would not rejoice at the verdict. "The fight is far from over. This is an interim order; even full orders of the court are often not implemented", he is quick to add.

Hearings will now be held on the fate of commercial properties that have already come up in mixed zones after the RMP was notified. The High Court will take this on in its next hearing on February 3rd, when counsels for the state government and BDA will be present. There will be a separate order for these properties, says Sondhi. ⊕

A reality check inside Bengaluru’s one and only composting plant

This composting plant in Bengaluru is supposed to be model that will show how large scale composting can be done in cities. But what is really going on? A reality check.

For her, sports is life’s cure

She is a BCCI certified A level cricket coach. The underprivileged children in Bengaluru who train with her are plain lucky. She could easily be coaching a major league state team.