With the academic year for schools nearing the end, most parents say it is the time for them to empty their pockets. Private unaided schools are hiking their fees for the coming year and expectedly, parents are worried. "They give us no option but to pay the amount," says a parent of a child studying in St Francis de Sales High School (SFS), Electronic city. Resignation appears to be the state of most parents in the city.

"The management gave me an option of 3 installments instead of 2 installments," says another parent whose child studies in Deccan International School, Padmanabhanagar. The parent says this was the reply from the school management when asked about the hike. 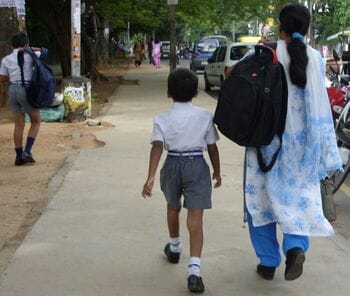 Many unaided private schools hike fees every year; its the extent of the hike that worries parents more than the hikes themselves. File pic: Supriya Khandekar.

Citizen Matters conducted an web-based dipstick survey of parents reactions to school fee hikes during January 20th-24th. Responses we received from 60 parents whose children were in schools ranging from Hebbal through Padmanabhanagar. (Dipstick surveys help record the top line of a trend quickly, they are not meant to be authoritative or deeper indicators.)

80% of parents were in for a shock; they say that the hike in their ward’s school fee this year is unexpectedly high. We also asked respondents about explanations given by schools. 57% say that inflation is one of the most common reasons. Overlapping with this, 46% of parents added that new capital expenditure is also cited. Right to Education Act (RTE) admissions are not a major factor in hikes this year, contrary to concerns expressed by a few parents.

Most schools appear to follow a procedure of hiking fees every year. They communicate hikes to parents through a memorandum, with explanations that include teacher’s salaries, infrastructure, inflation, extra curricular activities and so forth.

"There has been a hike of 10% from the last year’s fee, but it is not related to RTE", says a source from Bethany High school (ICSE), Adugodi. Cambridge School (ICSE), Krishnarajapuram, also confirmed they have a hike every year. "It is for school infrastructural purposes", a source at the school says, declining to give the percentage.

Parents surveyed came in on percentage of the hikes they were seeing.

"They give us reasons which we cannot say no to," says the SFS school parent. "They give us reasons that it is ICSE standards and stuff like that," says another parent of child who studies in the Carmel School, Padmanabhanagar. The same parent wonders at the volume of money collected through fee hikes in very large schools. "Where does so much money go?" he asks as he explains that each class has around 40 students with sections going from A to H.

Most parents say it is understandable if the hike is nominal.

Not all are raising

Inflation and capital expenditure rank high in reasons with substantial number survey respondents indicating that both reasons are given.

Despite worry all around, not all private ICSE/CBSE board schools are raising fees yearly. "We hike the fee every 2 years. We increase the salary and the money is needed for school infrastructure. Its 4% hike this time," says a source from St Mary’s Public School (ICSE), Queens Road.

Some schools even take a position on fee hikes. "Education should not be made expensive," says Syamala D, Principal, Deeksha High, (State&CBSE), Bannerghatta Road. Deeksha High is one of the schools whose fee structure is been the same for the past 4 years, says Syamala. She adds that quality education should be made accessible for all sections of the society and not just children from economically sound background.

All parents spoke to Citizen Matters on condition that they not be named. ⊕

All you need to know about Ward 84 – Hagadur

What were the works done in Hagadur ward in the last five years? How much money was spent on it? What are the issues troubling the residents?