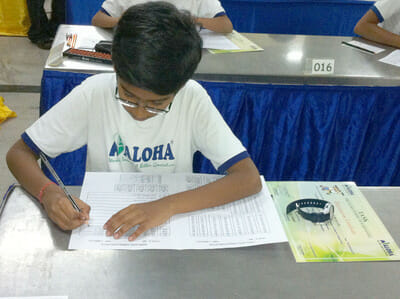 Arithmetic through abacus is a Chinese tool that helps develop the part of brain which controls creativity and integration of information.

Each student sported an Aloha Tshirt and was armed with the beaded abacus to solve 60 complex arithmetic Qs in 5 mins! Sounds unattainable? It probably was for the parents but these children were equipped with some interesting tricks to beat the time!

12-year-old Vaibhav Prakash from National Public School, Rajajinagar who answered 55 questions enjoys using abacus to calculate because it helps him do addition, subtraction and other such calculations much faster, so much to the extent that his father gives him grocery bills to validate!

Pallavi Ram says that using abacus programms helps in overall brain development. It improves memory as children are made to perceive quantities as pictures, which makes mental calculation easier.

Srinivasa D, a parent from Peenya, encourages his 11-year-old sons Chatush and Chetan to pursue this alternate form of calculation as an extra curricular activity. He also believes that such activities are an added advantage to score better in schools.

Disagrees another parent, Dr Priya, who says that abacus method of learning does not particularly guarantee higher marks in mathematics. She believes that children should not be pushed to anything. They should be encouraged in the direction of their interest.

Students at one of the batches of the competition.
Pic: Deepti Sarma

Hence, only Priya’s younger son 5-year-old Ramana goes to the Aloha programme as he loves numbers. She believes that these programs have increased his love for numbers and has improved his confidence and concentration. She also thinks Ramana loves to go to the Aloha program as he gets to meet other kids who love numbers like he does!

On the other hand her 8-year-old son Rahul does not enjoy math and so he pursues other extra curricular activities.

This competition also had a determined visually challenged child from Belgaum, 9-year-old, Basamma Gururaj Mathad who answered the 60 sums in 5 mins.

Aloha has programmes for children from the age of 4 to 13 yrs. The competition was held in 2 categories – 4-7 yrs age group and 8-13 years age group. With three prizes in each category.

They have also tied up with some schools like Pinewood school in Bangalore to take one session per week which would encourage students to use alternative methods of calculation.

When asked about the commitment of students coming from bigger schools as compared to smaller local schools, Pallavi Ram, the Director of Aloha Karnataka observed that children from middle level and smaller schools have more commitment as their parents are keen and understand the growing competition. Whereas the students from big public schools or international schools do not have that kind of pressure as parents do not push the children as much and are keen for the students to find an interest and then take it up.

Pallavi also added that children from small town are work harder whereas children from city are smarter and achieve more at a given age.⊕

A couple passionate about classical music dedicate space for their own little private concerts on their terrace of their home at Basavangudi, providing food for the soul… and the stomach.

Nine lives and one year later

They could have mourned the losses of their near and dear ones and walked away. Instead, within a year of the Carlton Towers fire, they created Bengaluru’s annual fireman awards.

How Bengalis are bonding in Bengaluru over Durga Pujo

Bengalis are adapting to the culture of Bengaluru’s eco-friendliness, by working on greener practices and themes. There are many places where Durga Pooja is being celebrated this year, and this article has the list.