Residents of J P Nagar have a reason to smile. B S Angadi, 49, the new Inspector of Police is an accomplished officer with major international experience. In this exclusive interview with Citizen Matters, he talks about his experiences and the challenges in his job. 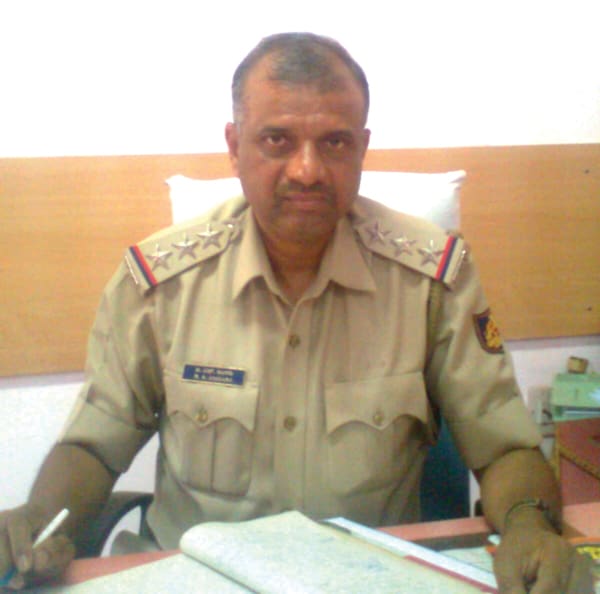 A native of north Karnataka, he joined the police force 1990. He is a BCom and an LLM graduate, with four years experience as an advocate before joining the police force. With experience and skills in sharp shooting, driving and English language, he was chosen by the UN peacekeeping mission in May 2002 to serve in conflict-ridden Serbia for a year under the investigation wing of the police department . He was part of a 55 nation team in Kosovo.

In 2007, he received the gold medal award from the Chief Minister for his outstanding contribution to the police department. He has been instrumental in drafting the "Bangalore south division police letter of appeal" to the residents under his jurisdiction. After his early years in the force, he was promoted to the rank of Inspector of Police in 2001.

Angadi’s tips for residents of JP Nagar
• Use bank lockers for valuables.
• Have enough illumination in and around residences.
• Women should cover their valuables while on the road with the help of saree/dress.
• Note down basic information while travelling in auto rickshaws like registration numbers.
• Do not entertain sales representatives without cross checking identification.
• Be wary of people posing as ornament polishers.
• Be aware of people trying to rob by diverting attention.
• Changing of locks prior to occupying a house on rent.
• Most importantly, inform the nearest police station, in case of leaving residence for long periods of time.

Angadi says that JP Nagar is a multi-ethnic, multi-cultural society and has the extremeties of the poor and the rich. He states that every day poses a new challenge to him and the department and attributes this to the changing pattern of crime and newer ways people think of to commit offences.

A very big responsiblity lies with press, police and politicians he says, since they are the ones to lead the society in the correct path and are the most accountable. When asked about what the department thinks when it comes to the safety of people, he says that "with a co-ordinated approach by the public and the police, prevention of crime, which holds the top priority, can be made or achieved without much distress."

"It’s the responsibility of the public to be aware of the surroundings and to take necessary precautions to avoid untoward incidents which end up with a crime being committed.⊕

About Satvik Kaushik 5 Articles
The author has not yet added any personal or biographical info to her or his author profile.

This segregation by colour will save us

‘Segregate’ is all over the media now, on radio, newspapers, magazine, TV, blogs, and the social media. It is also in all of the city government’s (BBMP) recent communications on getting the city out of the mess.

This nondescript woman isn’t actually what she looks — she has been known for her leadership and organising capabilities – internationally.

The situation of traffic on Hosur road captures the issues with urban planning in Bengaluru in a microcosm. The city never braced itself for the kind of population explosion it has witnessed.