The Karnataka government’s negligence toward health schemes for migrants working on Namma Metro construction sites can be blamed for a 55 percent rise in respiratory problems among them since 2009. Worse, a metro contractor at one site is using child labour openly. 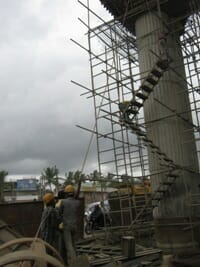 Every month the Victoria Hospital at KR Market registers a minimum of 30 to 45 cases of migrant metro workers complaining of respiratory problems.

Madhusudan Das, a medical information officer at the hospital, said this is mainly due to their constant exposure to polluted metro construction sites.

"Cases like allergies, asthma and chronic obstructive pulmonary diseases among the migrant workers have increased gradually in the past two years," Madhusudan said. "It is because of the long-term exposure to air pollutants during their working hours."

"The metro workers are continuously exposed to three of the most dangerous air component-carbon monoxide, nitrogen dioxide and sulfur dioxide that leads to respiratory irritation, bronchitis and infections," said P Kumar, a cardiologist at Victoria Hospital.

"For the past two years I have been suffering from asthma," said Nitai Das, a migrant from West Bengal. "When I consulted a doctor, he asked me to stop working as the pollutants are affecting my breathing system. But how can I stop working?"

"Unlike the construction workers and traffic inspectors, we are not provided with facemasks," said Sanjay Kumar Bhera, another metro worker.

When Bangalore Metro Rail Corporation Limited (BMRCL) was asked about this, the corporation declined to provide much information. "We do not provide any pollution safety guards to the metro workers. We are not responsible for it-the Labour Department is," said B L Y Chavan, chief Public Relations Officer at BMRCL.

Migrant workers are not registered and so are not entitled to any health benefits.

Karnataka’s Labour Department accepted that the government doesn’t have any health scheme for the migrant workers and there is nothing much it can do as the migrant labourers work unofficially.

"These migrant workers are unregistered under the department so it’s impossible to provide any kind of health scheme or facilities to them," said M S Ravishankar, former labour commissioner.

The negligence towards these migrant workers has led to their ill-health, and no one really seems to be doing anything about it.

What is equally alarming is the use of child labour; not surprisingly, 30 percent of the affected people are children. "Thirty percent of the cases we get are that of children. Their breathing system gets easily affected by the poisonous pollutants in the air", Kumar added.

Rajan Podder, a worker at the metro construction site, is just 12 years old. He neither smokes nor drinks, but still suffers from acute breathing problems.

Citizens can file complaints online or can call the child labour helpline at +91-80-22453549. The helpline is run by the Karnataka Resource Centre on Child Labour. The call centre receives information about working children throughout the state.

"We mainly recruit child workers from the neighbouring states like West Bengal, Orissa, UP, Andhra Pradesh because they are cheaper and less demanding", said Ramesh Rao, a local contractor of Namma Metro.

The Labour Department says they are unaware of child labour at metro construction sites.

Citizen Matters spoke to a coordinator at the state-run Karnataka Resource Centre on Child Labour (KRCCL) on condition of anonymity. KRCCL is based at Karmika Bhavan off Bannerghatta Road in South Bengaluru. "We don’t know about it. But if anyone complains, we scrutinise the issue along with the local police and convict the offenders", says the coordinator. (The author has since filed a complaint in writing with KRCCL). ⊕

About Rupsa Chakraborty 1 Article
The author has not yet added any personal or biographical info to her or his author profile.

Listen to this audio programme on how a group of Bangaloreans explore obscure city restaurants and relish authentic local cuisine, every Thursday afternoon.

Whitefield among the “best neighbourhoods” ?

With more and more high rises coming up, borewells running dry and no Cauvery water, what will Whitefield be?