It is 10.28 on Thursday 14 August morning when Praveen Sood, Additional Commissioner of Police, Traffic and Security arrives at his office in a white Ambassador. The office is located in the most airy place of Shivajinagar, the second floor of the BMTC building in the bus stand. 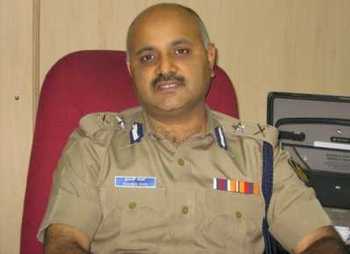 As citizens, we have numerous queries when it comes to traffic in the city. Most of us simply blame the traffic police for the mess. Our questions – the ones we discuss every evening before leaving our offices or when we come late the next day – are the same, but the answers depends on who you ask. What do Bangalore’s traffic police have to say about the jammed situation? I took the opportunity to put our questions in front of the man who sits on the top bench, Praveed Sood.

Sood took over as head of the city’s traffic police force six months ago. Prior to this, assignment he was Commissioner of Police for Mysore, from November 2004. In 2003, he took a sabbatical and did his post graduation from the Indian Institute of Management, Bangalore in Public Policy.

Sood is a graduate from IIT-Delhi (1986 batch) and he joined the IPS the same year. He started his career as Assistant Superintendent of Police, Nanjangud, Mysore in 1989. He rose through the ranks with positions at Bellary, Raichur and was a Deputy Commissioner of Police, West Division, Bangalore in 1995. He served as Police Advisor to the Government of Mauritius for three years. In 2002, he was awarded the President’s award for meritorious service.

Sood enjoys playing golf and swimming. He also enjoys dancing Salsa with his wife. While he is telling me all this with a twinkle in his eyes and a smile on his face, he confesses that nowadays he only thinks, dreams and talks traffic. Here are excerpts from my rendezvous with the man behind the traffic management of our city:

How long did you take to get to your office today? Was it easy? Do you live close by?

PS: I live on Airport Road and it takes me 20-25 minutes everyday to reach office. And it is certainly not a bad drive through.

How do the road works, drain line constructions and traffic synchronize? How is the coordination done between the traffic police on the one hand and the organisations like BBMP, BWSSB, BSNL (and other telephone operators who lay lines by digging roads)? Is there coordination?

PS: The BBMP or any related agency is supposed to inform us at least a day prior to their starting of work. And once we get the information we do our bit in diverting and managing the traffic at that place. Many times, it is the traffic police who alert the other agencies of any disruption. At times when there is a pipe burst or if any animal has died, the traffic constable on duty is usually the one who knows it first. He then alerts the BWSSB or the BBMP for further action and the traffic is handled on the spot by the policeman. Right now there are 48 construction works going on in the city and we have diverted traffic accordingly.

(Sood gets a call in his office while he is talking to me. The person from the other side asks him something and Sood directs him to put up sign boards and place two policemen near the BDA overpass construction so that people can be guided for the diversion in traffic.)

Why is traffic still a major trouble for everyone? Are you doing everything you can from your side?

PS: I think my police force is doing what they can given the conditions. We have 900 policemen for 35 lakh vehicles and out of the 35 lakhs, a large number comes under potential violators. Given a chance, all of us will break rules. We are not a naturally compliant society. Unless there is someone standing with a danda on our heads we do not follow rules.

A traffic police’s job is very tough and demanding. The constable who stands at the signal is not only subjected to high amount of smoke and soot, but also abuse from commuters. Everyone says that our policemen are very rude, I agree but even they are subjected to abuse by people. They are working under continuous stress and pressure. There is a minimum of 20 minutes of argument with the constable that every violator has. There is an excuse for everything every time.

Sometimes when we had caught drunken drivers, they argue saying what is wrong in drunken driving, and that many people have accidents even when not drunk. We really do not have anything to say to such people but it adds to the annoyance.

At the same time everyone holds the constable responsible for traffic jams, while he is the person who is trying to clear the jam and not create it. People find a chance to shout at the constable for a traffic jam but he has to keep one side [of the traffic] holding till the other side goes. He cannot let everyone go at the same time.

Do you think that widening of roads will ease traffic congestion and reduce traffic problems in the city?

PS: I personally feel that road widening is not the only solution for easing traffic congestion. This is causing harm to so many businesses and a lot more households are getting demolished when it’s not the best solution. Right now they will widen the roads to accommodate a capacity of 30-35 lakh vehicles but in the coming years the number of vehicles is certainly going to increase. Once the number becomes 60 lakhs, then are they going to widen even further? This way the whole city will be taken (for widening) but the problem will remain.

We first need to create a proper infrastructure to help move traffic without hindrance. Presently we have RIGHT turns after every half kilometre, this is not the case outside India. Right turns and U turns are a matter of ‘right’ for our country but they are a major hurdle for traffic flow.

At the same time we need a better public transport system. Mumbai has 18 lakh vehicles and a population of over a crore. Every single person uses public transport there. If the local trains and the buses stop functioning on any day, the city comes to a stand still. We do not have a lifeline similar to that in the city. Hopefully the metro turns out to be one.

What is the traffic police strength presently? Is it adequate? What should be the ideal scenario?

PS: The present strength is 2500, out of which 2000 policemen are available anytime for the public. The department works mostly in two shifts and sometimes even in three shifts. Some 900 policemen are on duty at anytime in the city. It is not the ideal number. We have 900 policemen for 35,00,000 vehicles. But we need to learn to work with what we have and our force is doing whatever is possible with the given scenario. There is no ideal number that can be set specially with the growing vehicular traffic.

How does the new surveillance camera system work (the BTIS cameras)? What was its goal?

PS: Currently there are 40 surveillance cameras put up in various junctions around the city. We are planning to make the number to 80 by the end of this month. These cameras regulate the traffic and help us taking corrective measures. These cameras also help us create in data collection of regular offenders. All the cameras can be viewed on LCD screens in the traffic management centre. A regular watch is kept on all the signals and violators can be easily noticed through that. Then we have 5 enforcement cameras as well which click the picture of the violator and that picture can be used as a reference to get the details of the vehicle.

We are planning to have more of such cameras and want to cover the whole city. We can then have a proper watch on traffic violators and reduce the chaos. These cameras also help us guide the constable on the signal in cases of traffic jams and acute congestions.

"From April 2008 (when the new cameras were installed in the city) around 6000 violations have been recorded. Out of these around 3000 chalans could not be sent because of technical errors where the vehicle numbers could not be captured properly. And of the roughly 3000 chalans sent, around 1500 have been paid," — Sudhir R, Police Sub Inspector, Traffic Management Centre.

What is the procedure by which a violator caught on camera is given a fine? I have seen people breaking signals and getting away with it.

PS: First of all I would like to say that not everyone can be caught. We will always have people getting away after breaking rules. We have random checks to catch violators and repeated violators are always caught. Once a person is seen breaking signal his vehicle number plate is captured by the cameras and then his registration number and other details are obtained through our data base. The person gets a challan at his residence. He can then pay his penalty at [any of the] 45 police stations in the city and in all the Bangalore One centers. He can also go and pay it with the court.

We have a data base where we know who all have paid and the ones who haven’t are under our eye. If caught once again they will face stricter action. This kind of leniency happens with small and one time violators.

Would you support a congestion tax (in-principle) for Bangalore (for all private vehicles) like London to reduce the burden?

I do not want to comment on this. It is upto the government to decide.

Give us some updates on the Bangalore Traffic Improvement Project (BTRAC-2010).

PS: This 5-year programme will cost about Rs.350 crores and for the financial year 2006-07, the state government has set apart Rs.44 crores. The implementation will be done by the state government-owned Karnataka Road Development Corporation (KRDCL).

We are already having sign boards on the main road and will have more of them. The road dividers are now a conical shaped orange coloured objects which can be seen in the dark as well and have sensors. If anyone touches the divider our system gets to know about and even when any vehicle tries to cross it. We have put sensors in some of the stop lines on the roads to check if people do not stop behind those lines at a red light. The sensor helps us catch the vehicle. We will soon put these sensors through out the city. ⊕

About Supriya Khandekar 66 Articles
The author has not yet added any personal or biographical info to her or his author profile.

An open letter to BDA: Construct subways, to avoid accidents

An alarm beep installed at every signal is just for 5 seconds, which is not enough for public to cross a long stretch of road.