We were first informed in early September about the massive projects planned along Sarjapur road. Citizens’ initial reaction was stoic. The typical reaction is exemplified by an email which declared: "let us do what we can to be as patient as possible".

In mid-September, we had a meeting with BDA and traffic police at the Koramangala Water Tank junction. At the meeting, for the first time, citizens started raising serious doubts. Standing at the junction, it was clear that traffic volume could not be accomodated on the service road along Sarjapur road which was planned to be only 5.5 m wide. Also, there seemed to be no co-ordination between BDA and traffic police, and many basic questions we raised did not seem to have been thought through. 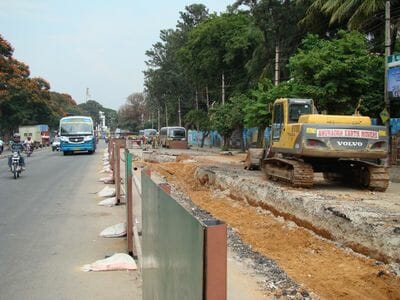 After viewing the project plan in BDA’s website, we found that Krupanidhi college junction was the worst planned. The underpass at this junction would be along the direction of the less-congested road, forcing traffic from the more congested road into a narrow service lane. A delegation of residents met BDA Commissioner Bharat Lal Meena to register their objections. We also met BTM Layout MLA Ramalinga Reddy.

Meanwhile citizen involvement was gathering pace. A task force of residents was formed. We objected to the projects in a meeting with BDA officials called by Reddy in September. The objections were specifically on faulty traffic data, poor design of slip roads, lack of provisions for through traffic and parking. BDA engineers agreed to put the projects on hold pending a review and re-design.

Another meeting was called by Rajya Sabha MP Rajeev Chandrasekhar with the Commissioners of the BDA, BBMP and the ACP (Traffic). At the meeting Chandrasekhar pointed out that congestion in Sarjapur Road was an offshoot of traffic problems on Hosur Road and that Hosur Road had to be improved first.

We also pointed out that one elevated road could be built instead of many underpasses and flyovers. Elevated roads would increase capacity instead of reducing it, cause less disruption of local traffic and prevent tree loss. BDA and BBMP Commissioners promised to stop work and consider our proposals.

Despite this, trench digging started at the 80 feet road junction in October. Agitated residents gathered at the site of work the next day. Bowing to pressure, BDA again commited to halt work. But the damage had been done – a fine motorable road was scarred by an ugly trench, creating traffic problems at the junction.

It became clear to us that this would be a long term issue. Members of the task force decided to collect information through RTI applications from BDA and BBMP. Applications seeking information such as Detailed Project Reports (DPRs), Environmental Impact Assessment (EIA) and traffic study reports were filed.

The results were quite a revelation. The traffic study, based on which the projects were conceived, were outdated and suspect – to the extent that the BDA could not defend it and was forced to commission a new study. The new survey now shows radically different numbers.

We also found that no EIA study had been carried out and that the DPRs were not thorough enough for a project of this magnitude (works at the four Koramangala junctions alone cost about Rs 119 cr).

Armed with RTI information, we gave detailed representations and a common petition signed by over 1200 residents, to Meena and Chief Minister D V Sadananda Gowda. But in November excavators and bulldozers were back at the 80 feet road junction. This time, about 100 residents protested at the site. The protest got extensive media coverage and once again the work was halted.

BDA then held a meeting with us to discuss "new" plans. But were shocked to find that there was nothing new about the plans – the only change was a slight increase in the width of the service road along Sarjapur road at the Water Tank junction. We also learned that BDA was planning to acquire land for the project, which would affect institutions like St Johns Medical College, Indian Institute of Astrophysics and Seva Sadan.

So we decided to meet Gowda and request his personal intervention to get BDA to do a complete project review. A meeting with Gowda was arranged on December 12th by Chandrasekhar’s office. BDA, traffic police, ABIDe, representatives of the project planning agency and contractor were present. After hearing us, Gowda promised a detailed project review.

At the meeting BDA said that funding needed for elevated corridor would be too high, but Gowda said this could be debated later. He also suggested that local residents be involved with BDA and ABIDe to develop a better, more viable proposal.

A meeting is expected in the next few days between BDA, ABIDe and citizens, in line with Gowda’s suggestions. Residents are hopeful that the outcome will be a win-win situation which balances a sustainable traffic solution with the rights of residents. The two objectives are not mutually irreconciliable. If only the powers-that-be recognize this reality and move forward accordingly.

Are lack of inclusive public spaces stopping us from celebrating our festivals?

It is festive time, but where is that space in the city or neighbourhood to celebrate, enjoy and get-together?

“The Science express”, a science exhibition on a train which is travelling all over the country is in Bangalore for five days till this Monday.

Development plans are created and implemented almost daily. Are a woman’s needs addressed in these plans?