Running culture is not new to the city. Bengaluru has hosted many marathons and is also witnessing an increase in the number of runner enthusiasts. Among those are Athreya Chidambi and Neera Katwal. They have been among the top finishers in the last few marathons. Chidambi and Neera were the first Indians to finish the Midnight Marathon in Bangalore. 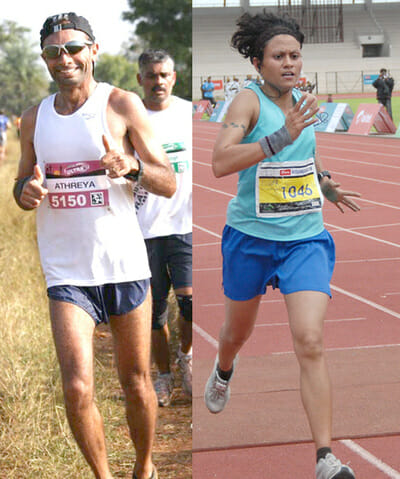 Athreya Chidambi and Neera Katwal at the Ultra marathon in November2011. Pic: Anju

"It was on one of my new years’ resolution list," says 33-year-old Athreya Chidambi, reminiscing about the time when he first gave running a ‘try.’ Chidambi, who is a graphic designer by profession, is an ardent runner. "It was back in London in 2005 where it all started. I had heard about marathons and also had friends who were serious about running," says Chidambi.

It was no different for 35-year-old fitness trainer Neera Katwal, who also was introduced to running by her friends. Neera had moved to the city three years ago. "I met a lot of enthusiastic runners in Bangalore. The culture of running was already there. I had many friends who used to run," she says.

For Neera, marathon is just an extension of her fitness workout. "I do a lot of talking and bargaining in my mind," she chuckles, speaking of the mental preparation for a marathon.

Chidambi on the other hand knew nothing about running but wanted to take part. He says he had no clue on timings, pace or distance initially. "London had a lot of opportunities for newcomers and it was encouraging. My first run was the best, but I overdid it and got injured. When I returned to India in 2006, running was still a brand new sport here and was not very popular," he says.

As runners, they workout often to keep themselves fit. Neera believes in proper preparation and follows various kinds of workouts ranging from strength training, yoga and hill running.

Chidambi, who cycles to work and runs regularly, says, "It is all about practising and learning to maintain one’s consistency. That is the hardest thing in this sport."

The one thing that both runners strongly believe in is the need for mental preparation along with physical training. "Knowing that you can run is the biggest drive to enter the marathon," says Chidambi.

For both Neera and Chidambi, once the marathon begins, it is all about talking to their minds and maintaining their pace. Neera adds that one should always avoid any kind of negative thoughts as they affect the pulse, causing lose of pace. "I run with music, it does not let me think much," says Neera.

Speaking of food, Chidambi seems to have taken to his passion quite literally as he admits that he eats everything. "I can always run it off," he smiles, trying to justify. On the other hand, Neera follows a balanced diet. "I consume calories in relation to how much I can burn," she says.

Both runners believe in trying to run close to the distance when it comes to pre-marathon preparations. "After training, reaching the final point mostly depends on maintaining pace," says Chidambi. Neera says that finishing the race is important, but that it has to be done keeping in mind your personal best.

The one advise both of them have for amateurs is that they should start off slow.

"Don’t try unrealistic things. It is not all about competition, you have to have a passion for running. It is an addictive sport," says Chidambi.

"Run for fun, first start off with 5K then slowly move to 10K, get in the mood of enjoying it. Make it a habit to run alternate days. Once you feel strong about running, it automatically conditions your body to run," says Neera.

With all the competition and injuries, running still remains very personal to both of them.

What do you do when all the media that confronts your child, the TV, newspapers and magazine, not to mention the internet, has nothing but bad news. Do you tell her as it is or do you gloss over facts and pretend you haven’t heard what she asked?