Do you wish for an adrenaline filled adventure this weekend? Then head out for a day’s trek at Savandurga.

Savandurga located 50 kilometers from Bangalore is a 2 hour drive from Bangalore towards Magadi road. Savandurga is one of the largest monolithic rock structures in world scaling 1226 m above sea level and is a delight to any trekker, seasoned or otherwise. Savandurga comprises of two hills BiliBetta (white hill) and KariBetta (Black hill). 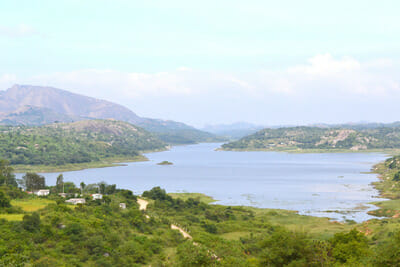 Savandurga has a rich history behind it. It was an important landmark during Hoysala period. It was then under many rulers like Samantha Raya of Magadi, Immadi Kempe Gowda of Bengaluru, Mysore kings and Hyder Ali. The British then captured it in 1791.

The hill has forts built by Samantha Raya and Kempe Gowda.

Things to do in Savandurga

Trekking and rock climbing: The huge rock structure inspires you to surmount it. The BiliBetta can be easily climbed in a day. Such adventure sports are organised by organisations like Thrillophilia, Nature Admire, bmcindia.org etc. Camps, Cave exploration, Kayaking and Rappelling are also organised by these centers.

Trekking on your own: You can hire guides to take you through the mountain or you can go on your own. There are yellow and white paint marks inscribed in the rocks, which show you directions to reach the top. Keep in mind that the trek up and down the hill can take about 4-5 hours.

The usual route is to get to the fort wall of the mountain and take to west side of the hill to reach a horse track of bricks. Then climb further up to reach an old stone structure and a pond. Further up to the right you have a stone carving of Hanuman. To reach the Nandi temple you will have to cross the rocky caves and then ascend to the top. So if you are unsure of ascending till the very top it is best to climb in stages, which can be classified as the fort wall structure, pond and finally the Nandi. 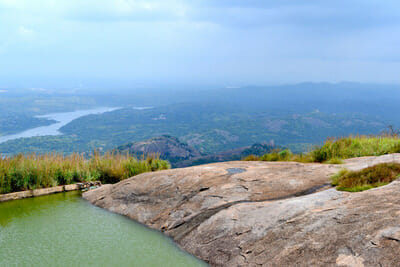 It is a nature’s paradise with the place surrounded by dense Savandurga forest and the river Arkavathi flowing towards the Manchanabele dam. The forest is said to be the home of diverse flora and fauna. The place is also known for its medicinal plants. In fact at the base of the BiliBetta hill you can check out the medicinal herb plantation. If you don’t want to be on your own then contact groups like Thrillophilia, which organise such walks.

It is a nature’s paradise with the place surrounded by dense Savandurga forest and the river Arkavathi flowing towards the Manchanabele dam. The forest is said to be the home of diverse flora and fauna. The place is also known for its medicinal plants. In fact at the base of the BiliBetta hill you can check out the medicinal herb plantation. If you don’t want to be on your own then contact groups like Thrillophilia, which organise such walks.

If you are a cycling enthusiast then you can try cycling from Bangalore to Savandurga, Manchanabele dam and Big Banyan tree. For routes check out dailymile.com and mapmyride.com.

This is a dam constructed by the Karnataka government across Arkavathi River to fulfill the irrigation and drinking water needs of Magadi. The backwaters formed by the dam are beautiful and is idyllic for family picnics and outings. Bird watching is a major activity here. Some of the birds which can be spotted here are the King Fisher, Robin, Bulbul, Stork, Swift etc. Boating, rock climbing and hiking are the other activities that can be done here.

The distant hills, the faint ripples in water, the various birds perched near the water and the Savandurga hills behind the lake make for a splendid view.

Rafting, Kayaking, Cliff jumping and Rappelling are also conducted by some groups.

This tree is the second largest tree in India and is spread over 4-5 acres. The tree is said to be 400 years old and it has over 500 branches. The area beneath the tree is well maintained and there is an old Shiva temple as well. It is impossible to distinguish the main tree as the old tree has spread laterally with its aerial roots. The aerial roots have thickened and look similar to the original tree.

My experience of the trek:

None of us were seasoned trekkers and the “us” includes my husband and my 5-year old son. We did not know much about the trekking part or any information about the hillock and we simply set out to Savandurga taking the route Bangalore-Magadi road-Tavarkere-Chandrappa Circle-Manchanbele-VeeraGowdanaDoddi-Savandurga.

After this, we had to cross the Savandurga forest to reach the hills. We visited the temple at the foot of the hills and filled our backpack with water and eatables. At the first glance the mountain looked steep and insurmountable. And so we decided that we will simply trek for an hour or so and at least see the ruined fort located midway of hills.

So we followed the yellow marks, which took us to the fort. When we reached the fort we decided to trek for some more time and see what’s atop the hill. Small creaks of water in the rocks helped us get refreshed at every turn. After about an hour or so we reached a second fort. Here we were lucky to get fruit juices from a villager who charged us double but nevertheless quenched our thirst.

Renewed we decided to trek the last 30 minutes and check out the Nandi temple and the Hanuman carving on top of the hill. In steep places there were steps carved to help you reach the top. At the top you can see a small pond and a breath taking view of the Arkavathi River and the surrounding hills. We rested here for few minutes before undergoing the final lap of the journey to view the Nandi. At around 2 pm we reached the top and the sense of achievement that accompanied the trek was tremendous. At 2:30 pm we headed back and reached the bottom of the hill by 3:30 p.m. After a brief stop over at Manchanabele dam and Dodda Allada mara we reached Bangalore at 7 p.m.

The moral of the story; Trekking mountains can definitely test your fortitude, patience and stamina. And undergoing this challenge can give you a deeper purpose in life.

How to get to Savandurga

If you are staying closer to Magadi road, then take the route to Magadi road, take left at Bylakuppe junction after Tavarkere and head towards Chandrappa circle and follow the same route as given above. Alternatively, you may also take a left (near petrol pump) before entering Tavarkere and head towards Big Banyan tree and take right towards Chandrappa circle.

KSRTC and private buses are available from Majestic and KR market to Magadi. You will have to get down at Ramanagaram road just before Magadi and then take an auto to Savandurga.

There are no good hotels nearby. So it is advisable to carry food. You will only get snacks, water, tender coconut and tea shops at Savandurga. Your best bet for decent hotels is at Bangalore and Magadi.

The roads are in good condition and the drive is a pleasant one. You can take elders and kids along with you for visiting the dam and the Big Banyan tree. Camping can be done atop the hill. But beware of high winds and wild animals at night.

But keep in mind the hill has no ropes, supporting poles or steps. That is why in the earlier days it was known as Savina Durga or fort of death as it was considered impregnable.

Was the government fair in not permitting the Bangalore Book Fair? Why there should be book fairs?

What’s special in this edition of Bangalore’s book fair?

There are 300 book stalls with over a million titles at the 8th annual book fair at Palace Grounds. Don’t miss the part on the special offers and discounts at the fair.