Apartment associations in the city have got assurance from the state Pollution Control Board (KSPCB) that Sewage Treatment Plant (STP) norms for apartments will soon be re-defined. An informal group of residents from various apartments across Bangalore, have been in talks with the Board for over six months, many of them having faced issues with STP quality and adherence to regulations.

Board Chairman A S Sadashivaiah said that the new processes will be finalised by March and will be implemented by June. Board will redefine aspects such as stringent checks before approving STPs, holding builders accountable for STP quality etc. 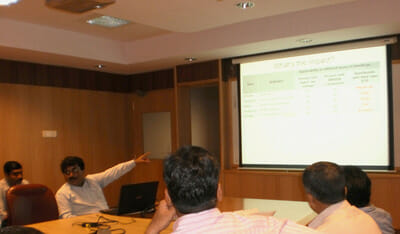 The presentation at the meeting between KSPCB officials and apartment residents in November.Pic: Navya P K

Sadashivaiah announced this after a meeting with the residents on November 26th. “A team of 4-5 experts including STP consultants and Board officials will be formed. Builders’ association representatives will also be involved in the process,” he said. The committee is yet to be formed.

Residents had complained that builders set up STPs that do not meet the requirements of apartments. These are handed over to residents even before the apartments are fully occupied. “Only when the apartments are fully occupied, residents find that the STP is not equipped to handle the load. Many problems are due to faulty design and engineering. But since they are already handed over, residents end up paying for repairs,” said one of the citizens, giving a presentation at the meeting.

Aras said that Board should certify STPs on their quality before giving the builder consent to start operating them. Currently KSPCB does not certify STPs on their design and operation, but only checks the quality and quantity of treated water. Hence additional checks are needed, said residents. 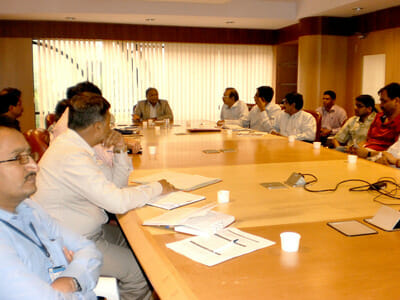 Residents and KSPCB officials at the meeting. It was presided over by KSPCB Chairman A S Sadashivaiah.Pic: Navya P K

“PCFO should be made mandatory for getting Occupancy Certificate (OC) for the building. And only after getting the FCFO, builder can hand over the STP to residents,” they say.

They also demanded that a checklist be used to record the STP components and verify design while giving consent to builders. This information should then be passed on to residents so that there is transparency on the STP’s status.

“Currently these (components and design) aspects are not recorded. If there are flaws, Board later demands that resident make design changes. But these should be checked in the initial stages itself,” said Dr Ananth Kodavasal, STP expert, who was also present at the meeting. Residents also demanded that the Board should take action against builders under the Water Act if flaws are found during independent audits.

Another demand was to waive the fee for renewing CFO annually. Instead of having to pay this fee, apartments should be incentivised for treating sewage; independent houses do not treat their sewage and dump it in lakes, but are not required to pay any fee. So there is no rationale for collecting huge fee from apartments, and there is no clarity on how this money is being used, felt the citizens.

Apartments with area more than 20,000 square metres in non-core areas are classified under ‘Red’ industries (most polluting), and correspondingly high fee is collected from them. This fee also goes up according to the capital investment of the project ie., a luxury apartment may have to pay more than a regular apartment even if the number of residents in both are the same.

Speaking to Citizen Matters, Sadashivaiah said that fee collection cannot be stopped suddenly as this was a huge revenue source for the Board. “We will decide on that later; for now other processes will be strengthened. We will insist that the builder will have to operate the STP for at least five years before handing it over to the associations, and will make sure that they comply,” he said.

Board also plans to publish a list of empanelled STP consultants in its website, so that public and builders can use their services.⊕

Kaveri Online Services aims to cut redtapism. Work on TenderSURE roads could start by January. And you may be able to commute via bike taxis soon. Here’s the news round up from Bengaluru for last week.

As more COVID-19 cases were suspected, BBMP held meetings with IT company representatives and mall operators last week to discuss protocols. Catch up on other news from the city over the past week, in our roundup.