In government parlance, ‘merging schools’ is the fancy term for shutting them down. The schools are said to be closed down temporarily, and students and teachers are said to be shifted to other schools nearby. But for many children from the closed down schools, education ends just as their school closes. 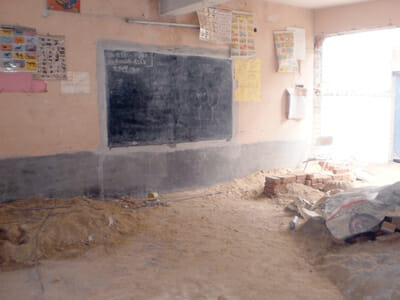 Mariyamma Temple school is being renovated by the temple committee for its own use, even though the school is still with the government.
Pic: Navya P K

Sathish Dharmaiah, a former 3rd standard student of Mariyamma Temple LP (Lower Primary) school in Tilak Nagar, now works in a mutton stall close to the school. The school was shut down in June, citing lack of students as the reason. Though he was seen working around the stall, speaking to Citizen Matters, he denied working there. Another student Karthik Chinnaswamy has been working in a garage.

Students, mostly from the nearby slum suffer – some have moved to schools nearby, while some others do nothing and a few go to work.

The school had classes from 1st to 5th standard. It was supposed to be merged to Gulbarga Colony LP School nearby. But only five students have moved to the new school.

Sophiya Haroon, 11, who was a 5th standard student at the school, does not go to any school anymore. Sophiya’s mother Munni says, "She used to be good at studies. But she is not interested in going to any other school even though I asked her to."

Munni is a single mother of two, and supports her family by making agarbathis. Many other parents in the slum do construction work for a living. Like Munni, they were not aware that the school was going to be shut down.

Margaret, mother of 4th standard student Jhansi, says, "We did not know about the school closure. When it closed, I simply shifted her to Gulbarga Colony School. It is farther than the earlier school, but I want her to continue studying."

Some former students have shifted to other schools like Adarsha Vidyalaya and St Antony School nearby, which charge higher fees.

A government school teacher, on condition of anonymity, says "students in our schools are mostly from SC/ST communities. Parents are too poor to afford travelling costs to the new school. Most are illiterate and cannot participate in decision-making at the school."

According to DPI (Department of Public Instruction) rules, teachers of the school that shuts down have the responsibility to ensure that students are shifted to the new school. But there is no mechanism to ensure this.

Was the student attendance really low? 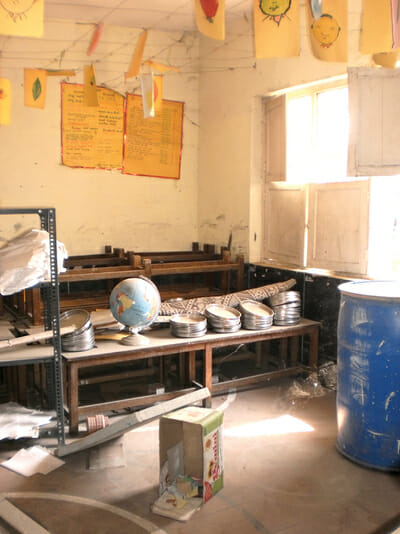 M Munireddy, BEO (Block Education Officer) at South-3 zone, says that there were no children at all this year at the Mariyamma Temple School.

"Last year there were three students in the school, this year there were none. Running cost is high and quality of education is poor in such schools," he says. But attendance register of the school for this year, which Citizen Matters has verified, indicates that the new admissions alone were nine.

Munireddy says that the department is ready to re-open the school if children come. But the school building itself is being taken over by another party.

The school is located on the first floor of Mariyamma Temple, with the temple on the ground floor. In addition to the LP school, this floor also had an anganwadi and a Sadashale (school for working children). According to Munireddy, Sadashale with its 2-3 students is still functioning in the premise and the anganwadi has closed down due to lack of students. Munireddy says that the Sadashale may also be shut down due to lack of students. But the temple committee has already started renovating the floor where the school was located.

J Mohan, Executive Member of Karnataka Mariyamma Temple Managing Committee, says that they may start a coaching centre or its own school in the space.
The school was sanctioned in 2003 by the then Education Minister Ramalinga Reddy; temple authorities were against the move. BDA had allotted the CA site for the temple in the early 80s. In 2004, the temple committee filed a case against the committee Secretary Bheeman Stalin who had helped build the school. Court ordered that the school was against the interests of the temple and restrained Stalin from continuing to participate in the temple’s activities.

Mohan says that the school was a disturbance for the temple’s activities and that it lacked proper facilities. "There was no proper water supply to the toilets and the government contractor’s construction was shoddy." Showing the cracked walls, he says that the structure was in danger of falling down, and that Jayanagar MLA B N Vijayakumar is helping them in the procedures to get the structure handed over to them.

Munireddy says that department has not handed over the building to the temple committee and that he is unaware of construction activities. He assures that he will check the matter.

3 other schools shut down despite good infrastructure

"MLA wanted to develop Marenahalli HPS and hence got the order to merge T block HPS as well as Ragigudda LPS to it," says Munireddy.

Vijayakumar says that not all 60 children were attending the school and quality of education was poor. "I initiated the merging and kept approaching the DPI and government for two years for this. The location and atmosphere of Ragigudda and T block schools were not very good. Marenahalli school is 30 years old, already had more students and is located in a good spot, so we decided to develop it," he says.

Marenahalli HPS is 4-5 kms from the T block school, making it difficult for children to travel. Vijayakumar’s office arranges for a school van to pick up the former students of T block and Ragigudda schools daily. But here also the numbers cited by the office is different.

Vijaykumar says that a PU college or ITI will be set up in the school building this academic year itself, as there are no such colleges in the vicinity.

The department also has teachers of all schools survey areas around their school to identify out-of-school children, but children remain out of school despite this, say NGOs.

The PIL says that lesser number of students do not imply poor quality of education, and that Kannada medium government schools are being closed only to aid private English medium schools.

Update: According to a Kannada Prabha report, High Court heard the PIL yesterday and asked the state government to maintain status quo on this case.⊕

The city now boasts of India’s first fully sponsored professional cycling team. Here’s a sneak peek into who they are and what they are planning.

On 26th March, citizens in Bengaluru join hands with their counterparts around the country to launch Dandi March II. This is part of a nationwide campaign to force New Delhi to pass long overdue and much needed laws.

All roads lead to Metro

After a two year delay, Namma Metro finally chugs on. Although it is only Reach 1 of Phase 1 with lot more of the tracks to be laid, Bengalureans were out in full force to celebrate the moment.