Bengaluru is one of India’s more vibrant hubs for startups. But this startup near Whitefield is a firm few people would have expected.

A Hoskote farmer has launched his own grocery supermarket. H Krishna Murthy, 40, a farmer who goes by the name Krishna, opened his swanky outlet, A1 Fresh World (A1FW) at Kadugodi last month. Krishna hails from Kolathur village in Hosakote and runs an 18-acre farm. Not unlike the major players in this sector, A1FW carries everything from fresh vegetables, dry groceries, diary foods, confectionary, beverages, savouries and so for. 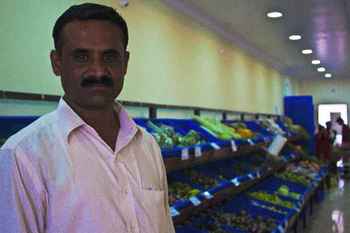 A1 Fresh World is is one-and-half months old. Krishna proudly says that everyday at least 10 people get added to his customers list. 50% of the vegetables come from Krishna’s and his manager B Sathya Narayana Raju’s eight-acre farm, and the rest from contract farms. Other items he purchases from the distibutors who visit the A1 at a regular intervals. Krishna spoke in Kannada to Citizen Matters.

"I give seeds to (contract) farmers so that they can harvest and yield the product. I even wish them to come out and joint this venture", says upbeat Krishna about his vegetables and produce.

"This place was like a jungle and did not have any facilities till now. A1 really comes in handy for people like us", says Anand Verma, a regular customer of A1FW. Verma lives in a near by apartment.

"I never thought of having a market or business of my own", says Krishna referring to his past. "It was my decision to come out of my village and do the supply business. It turned to a success", says Krishna with a smile. Pointing to his background, he adds that his father never allowed him to do anything other than farming. "It was my burning desire break the shackles around me", he adds.

Krishna appears to be a very happy man in life. "I do not even think that I am just a man with
10th standard education", he says, and pauses and continues, "Why should I allow the education factor to come in when I have courage?" 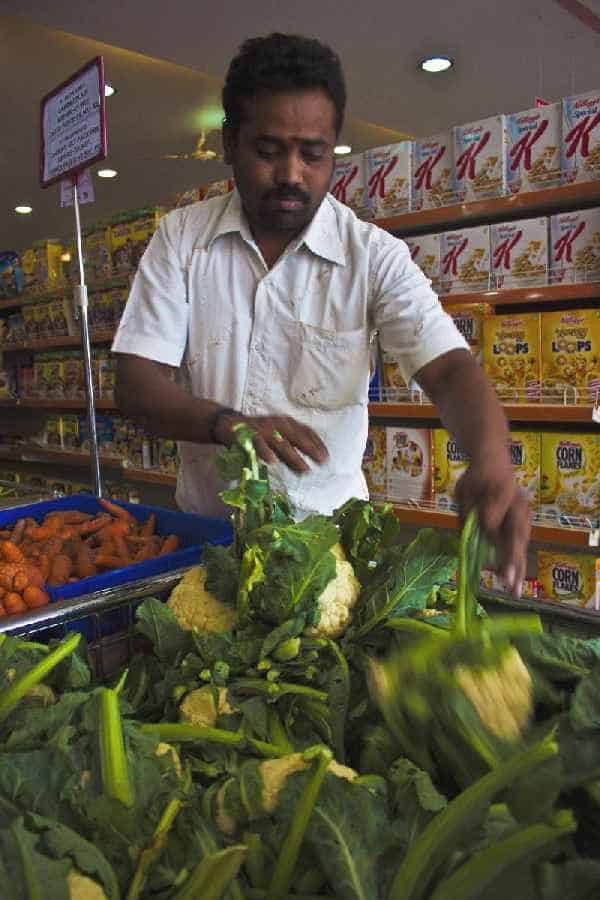 B Sathyanarayana Raju alias Rajanna, is fellow farmer and close friend of Krishna, and manager at A1FreshWorld. Pic: Greeshma M.

The real story, a dream

How did the supermarket happen? Krishna smiles and calls his friend and manager Sathya Narayana Raju, being called as B S Raja or Rajanna, 36. "My life always revolved around farming. My father has acres of land where we do farming", he says. Eleven years back when Krishna first came out his house to supply papayas to the city market, like other farmers, he just wanted to make his money and go back to his nest.

But it is when he started supplying vegetables to the modern supermarkets, that he began to understand the business. "I started thinking, and A1 Fresh World came out of that. Why should we depend on the international market to sell the product which we harvest?" asks Krishna.

Eight months back the land where the A1 located was bare. Krishna and Rajanna say they took six months to build the supermarket there. Krishna did not want to take the help of any others except Rajanna who shares a close bonding with him. He and Rajanna both picked the name for the shop. "A stands for God Anjaneya and the rest came just like that", says Rajanna, taking over the conversation. 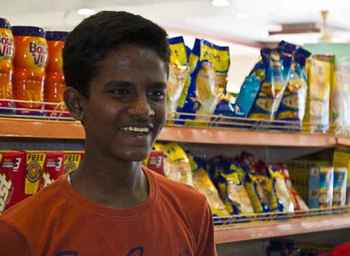 Krishna two sons come to the shop over the weekends to help. Sudarshan, the younger one does his schooling at Citizen College. Aadarsh the elder son, is in 11th standard at Silicon City college. "We learn everything from appa, and if we are here today it is because of him" says Sudarshan.

Krishna adds to this. "I make them to do everything that I do, so tomorrow they will not say I do not know". Krishna knows only Kannada, Tamil and Telugu. He says he wants to learn Hindi.

For Rajanna the beauty of this market is the time that they take to transport the vegetables from the farm to the shop. "It hardly takes 2 hours whereas it takes around 24 hours to dispatch the vegetables to hypermarkets" says Rajanna. 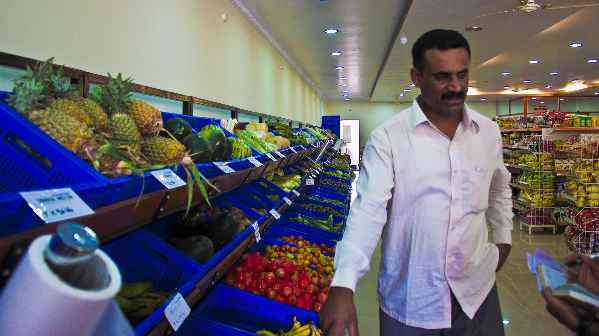 A1FW appears to be the first supermarket of this kind launched by a farmer in Karnataka. (Citizen Matters has not verified this at the time the article went for publication.)

"If you have the desire to do anything, you can do it. Just sitting back will do nothing other than destroying your thought", says an inspired Krishna about his achievement. ⊕

About Greeshma M 2 Articles
The author has not yet added any personal or biographical info to her or his author profile.

Bengaluru has become only the third city in the country to get an Astroturf for football.