Being involved in a community project in colleges through which we try to empower students to make an informed decision of whether to start their own company after they pass out of college, a thought struck my mind a couple of months ago. Students can do this only if they know the ground realities of being an entrepreneur – which is best achieved by talking to one.

A bunch of us – all software engineers from Bangalore, took this idea seriously. We all wished to make a difference to students who are yet to join the work force of India, inspired by the vision to create an India of employers rather than employees. 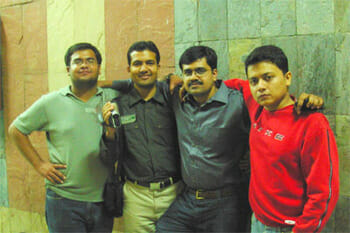 Mrinal Paul works in Intel’s Graphics Group as a Validation Engineer. He is a startup enthusiast and helped us with the documentary in fixing appointments and conducting interviews.

Hemanth Haridas is an M.Tech from IIT Kanpur and currently works with Cisco. He is very enthusiastic about ventures and attends many events related to them in Bangalore. He drove the project.

Gaurav Ahuja, B.Tech from IIT Roorkee, currently works in National Instruments. He is always excited to do new and creative things- and jumped at the idea of making a movie. He helped with the interviews and summarized them for us.

Amit Singh is a freelancer and major contributor in kickstart.in, a non-profit initiative aimed at promoting entrepreneurship. He linked us to the budding entrepreneurs of Bangalore.

And I am a IIT Delhi, 2006 graduate with a dream of starting my own company one day. I am now with Bell Labs, but the dream is still alive.

To achieve our goal, we interviewed 17 different entrepreneurs of start-ups ranging from technology to services, education, theatre, art, web 2.0, interior design (see box). They were quizzed about their execution methods, startup strategies, financial sources, idea validation, fears and challenges. We succeeded to put it all with an interesting storyline.

It was not all smooth sailing though, but every action is an opportunity to grow. With a microphone, laptop with audacity installed, a newly bought Sony handycam and a copy with some questions to be asked from the entrepreneurs, we started out. The first two interviews were a great learning experience and we quickly came to know the mistakes we were making in conducting the interviews, picking the right backgrounds for shooting, setting the right mood,

ensuring low background noise and brightly lit place, and slowly became proficient in the same. The next big challenge was to manage our official and personal appointments to fulfill our commitment towards the documentary. Next, video editing with 200GBs of footage was a big challenge. To encapsulate the interviews with an interesting and captivating storyline took a lot of our creative energies. Challenges notwithstanding, we chose to make the movie happen no matter what. That’s when we really grew from enthusiasts to result producers. We learnt our first lesson of entrepreneurship which is integrity, i.e. the power to deliver one’s commitments.

We have called the documentary Startup Savvy, and have released it on Youtube. The Youtube link will be posted on our blog until we figure out a better place to put the high quality version. The documentary, which is in two parts of approximately 30-45min each, will be shown to students of different streams in colleges across India, to give students an inside view of a start-up so that they are better equipped in making their choices during placements.

We plan to show the documentary in different online entrepreneurship fora like NeN, TiE, Barcamp, OCC, Kickstart, Mobile Monday and Startup Saturday. We hope to rope in a media partner too, and are willing to look at offers from volunteers to showcase our documentary across the country.

About Ankur Jain 1 Article
The author has not yet added any personal or biographical info to her or his author profile.

“Namma Metro till Silk Institute saves me Rs 10,000 a month”