Enzen Water Solutions, a Bengaluru based company, unveiled a possible solution to improve the quality of the water in the city lakes. This subsidiary unit of Enzen Global Solutions Pvt. Ltd announced the experiment results of the six week trial conducted at the Puttenahalli Lake in JP Nagar, 7th Phase. In a first attempt of its kind, Enzen collaborated with the BBMP and the Puttenahalli Neighbourhood Lake Improvement Trust (PNLIT), the citizens’ group that is maintaining the 13 acre lake which was restored recently by the BBMP. 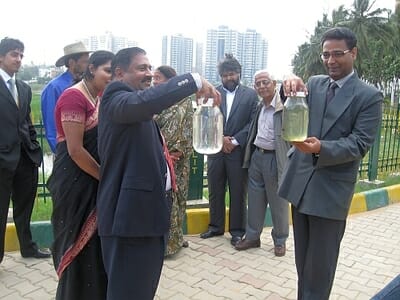 The experiment using an eco-friendly technique called Phytoremediation was conducted on 15000 litres of water taken from the dirtiest part of the lake into a cement tank and mixing nano-nutrients in the water. By the second day, the odour had reduced in the water. After a week of treatment, when the water began to gain clarity, Enzen introduced fish in the water and continued the cleansing. Two weeks later the fish were seen to be healthy and thriving. At the conclusion of the trial, they were removed from the tank and released in the lake.

According to Easwar P, Head, Enzen Water Solutions, the Nano-Nutrient solution catalyses the growth of dissolved oxygen, arrests and filters excessive nutrients in the water and is consumed by the fish. Consequently, the once blackish water turned into a clear crystal liquid. Throughout the trial, Enzen and PNLIT monitored and recorded the changes in the water along with laboratory testing of the water. The samples collected through the trial were exhibited at the Gazebo at the Puttenahalli Lake. 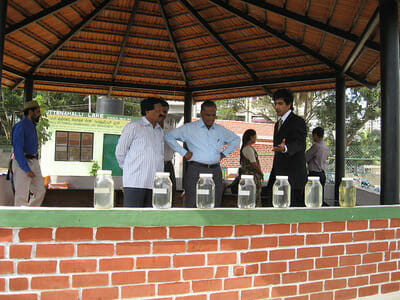 Easwar also announced their plan to further improve the quality of water in the lake by installing solar-powered water circulator – aerator and increasing the level by diverting rain water into the lake. Enzen Water Solutions had recently signed a memorandum of understanding with a France-based company called Tech Sub to jointly explore the opportunity of rejuvenation and restoration of lakes and water bodies in India.

At a time when the city’s lakes are dying due to pollutants entering the water, Phytoremediation seems to be a possible way of giving a new lease of life to them. However, for any cleansing to be really effective, pollutants must be diverted away from the water bodies. Asked whether the Puttenahalli Lake had any inflow of sewage water, Chandrasekhar, Executive Engineer, BBMP said that there was a trickle entering from an adjoining layout and that they were following up with the BWSSB to divert it and make the lake free of all sewage.

In less than two years after restoration, birds have started returning to the lake in large numbers much to the delight of bird watchers who have by now spotted over 45 species of birds in and around the Puttenahalli Lake. These include the migratory species like the Garganey ducks, Barn Swallow, Grey Wagtail and many others. Clean water teeming with fish will bring many more birds to the lake fulfilling the aim of PNLIT to convert their lake into a bird sanctuary.

Residents object BWSSB collecting borewell surcharge and the plans to stop supply of drinking water for non-compliance of RWH rules.