The Water Station is a critically-acclaimed play written by the Japanese playwright Shogo Ohta. It is the most famous piece of his "Station" trilogy, which includes The Earth Station and The Wind Station. The play was first performed in 1981 with a Japanese cast, and has since been performed all over the world with various actors of diverse origins. Director Sankar Venkateswaran of Theatre Roots and Wings first directed the play for Ninasam in 2010, and this time around he has put together a varied cast auditioned from all over  India. 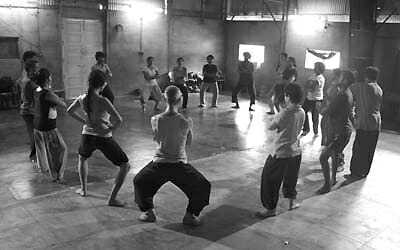 In the two-hour wordless play, eighteen travelers who appear to pass through a desolate landscape stop at a dripping water faucet. The play then becomes the (non) interaction of these characters. They drink, soak, meet, fight, love, weep, and eventually leave. Two travelers fight for the water while a lady fearfully watches. An apparently mad woman with a parasol slakes her thirst. A couple with a pram that contains not their baby, but their belongings, meets in melancholy, and their act of drinking the water turns into lovemaking that somehow leaves them sadder than before.

An old woman with a basket drinks and dies. At one point in time, a group of eight characters come to the water station and witness something horrific (perhaps a war, a bomb?). An old rag-picker finds a treasure in the junk, a shoe. All this while, a man who lives in the junk pile that surrounds the station is watching them. Eventually, the play ends when the rag-picker leaves and the lady who first entered the stage returns, providing some sort of completion. The entire play, except for three sudden moves, is done in slow motion.

The slow motion in the play can really be hard on an audience that wants some "action". The first hint of this is observed when the first character is already on stage for ten minutes before the audience notices her and accepts that the play has begun. The audience’s time frame is slowed down completely. A character takes up to twenty minutes to walk ten steps. A simple action like raising the hand to the mouth appears to take eternity to complete. Worse, as the audience, you could accuse yourself of not having "got" the play, as there is not a single word that is spoken.

The mind tries to make "sense" of the play, then wanders, returns to the action, contemplates and dismisses it, and wanders, and can finally rebel. All the while, the mind tries to force a resolution and create a thread that can provide "understanding", and it fails. After about an hour or so, it is the audience that starts physically hurting although the actors undergo the grueling task of performing slowly. You can almost will the actors to change their rhythm, but they do not break.

On the other hand, if as a watcher, you let your mind accept the slowness and allow it to "soak" through you, some interesting things can happen. Slowness itself can become sudden. The slowness of movement allows your mind to fill in the gaps and therefore, you can turn away from a character that appears to be doing something very simple, like brushing his teeth.

You look at the other action on stage, and when you turn back to assure yourself that the character is still doing his thing, when suddenly you find him perched on a huge step ladder. The man who watches the actions of the people at station, the "voyeur", is particularly such a stunning character. He appears out of nowhere, brushes his teeth, reads a paper, uses a telescope to spy on people, etc. in a magical fashion.

The sound of the water dripping into the faucet itself becomes a hypnotic rhythm, and when it is broken by people drinking, that simple stopping of the sound becomes an event as loud as the Big Bang.

If you let yourself sympathize with the actors, you feel the pain of being slow all the time. You wonder about the motivation and concentration that keeps them slow. How do they control their mind? What are they saying to themselves as they step up to the water tap that is two feet away but yet know that it will take them five minutes to get there? The actors all do a fine job, and the rag-picker (Gopalan of Malayalam theatre fame) and the old lady with the basket (Scherazade Kaikobad) are exceptional.

But perhaps the most interesting thing is the playwright’s mind. How did he arrive at the idea, and how did he decide on the characters chosen? Of course, he could have chosen any set of characters and we would never know. But somehow the choice of characters seems to most agonizingly reflect our pitiful loneliness as humans.

The Water Station is indeed a powerful idea. However, like many powerful ideas it can be lightly dismissed. The play offers opportunities for introspection, if only we can "slow" ourselves down, dig deeper and find that elusive clear, bright, and sweet water, if it exists.

The play was performed at Ranga Shankara on 30 November.

Students of Jyoti Nivas College and Government School at Kudlu village team up with IYCN volunteers to save Parappana Agrahara Lake.

Five videos that capture the spirit of Bengaluru

Bengaluru has become a melting pot of cultures. Have a look at these videos that beautifully capture the changing culturescape of the city.