On 8 November, some apartment associations around Cubbon Park had domestic workers in their apartments profiled. Photographs, fingerprints and detailed information of the workers were recorded by a private agency. The profiling was organised by Cubbon Park police station. 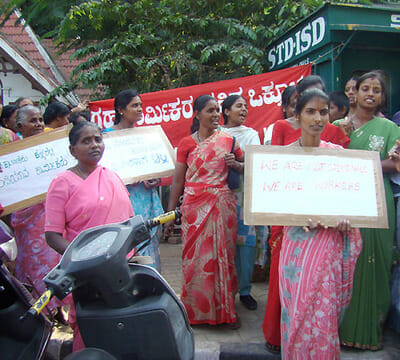 The private agency Hamari Suraksha in its website says that it is ‘rooting out domestic terror’ through this procedure. This is supposed to prevent crimes committed by domestic workers and help the police track workers when there is a crime.

We are not criminals

The event sparked off a protest on 10 November by Domestic Workers Rights Union (DWRU). About 50 domestic workers who were part of the union, marched to Cubbon Park police station and then to the police Commissioner’s office.

The workers’ contention was that the entire community was being generalised as criminals. DWRU has raised concerns about making workers’ personal details accessible to public. It has demanded that registration should not be supervised by the police; instead it should be done by the Labour department, which would give identity to domestic workers.

“This would be beneficial for both workers and employers. Workers can complain about cases of harassment, employers can approach the department too,” says Pusha Seth, 33, a domestic worker based in JP Nagar, who had participated in the protest.

M Mary, a domestic worker in her 40s staying near LIC Colony, says that she will not give her details even if the police asks her to. “We are not criminals to be treated this way. There may be some workers who commit crimes, but we have been working honestly. Also, if police comes to my house for verification, what will neighbours think?”

During the protest, Police Commissioner Jyothi Prakash Mirji told protestors that the police was not concerned with the process at all, and that workers would not be forced to give their information. “He said that the programme was already functional in cities like Mumbai and Delhi, but assured us that workers would not be coerced into giving details. He did not give us anything in writing though,” says Geetha Menon of DRWU.

They again protested on November 29th at the Labour department. “We co-ordinated with two other domestic workers’ groups in the city also for this. There are only about 60 active domestic workers in DWRU now,” says Geetha.

Speaking to Citizen Matters, Additional Commissioner of Police (Law and Order) Suneel Kumar maintains Mirji’s narrative. He says that the police are not part of the process and does not have any tie-up with the company.

After Cubbon Park police station, other local police stations are also showing interest in the programme. Two weeks ago Hamari Suraksha approached JP Nagar police station with a proposal to implement the project in its jurisdiction.

JP Nagar Inspector S K Umesh is supportive of the initiative and plans to speak to the local apartment associations about implementing it. “Police is only a nodal agency in this. The agency approaches us first as it would give them credibility. We will organise a meeting of residents and the company, and residents will make their decision,” Umesh says.

Ankit Trikha, Operations Head at Hamari Suraksha, says that he is getting in touch with other local police stations. In the second phase of the project, the company plans to profile labourers in commercial establishments. “Security and maintenance employees, mall employees etc will be registered. After this tenants in rented houses will be registered. These are potential risk groups. We will also train police to use the database,” says Trikha.

Umesh says that the programme is only for apartment associations now and not individual houses; the company has quoted the price of Rs 150 for associations to access the record of one worker.

Many JP Nagar residents that Citizen Matters spoke to seemed to be supportive of the initiative. Even though many residents were not sure of crime rates by domestic workers, general perception was that these workers commit a disproportionate number of crimes and hence should be profiled. Since the previous employment details of workers would also be available in the database, employers believe this would prevent workers from switching jobs often as well.

The common complaints of employers were that domestic workers demanded higher salaries, quit jobs often, showed inappropriate behaviour, and rarely, stole things. A few opined that the protestors’ demands were legitimate, but that the initiative still had to be welcomed since there is no mechanism now to verify credentials of workers.

C R Venkatesh of Silver Oak Layout Residents Association (SOLAR) in JP Nagar, says, “petty crimes by workers happen everyday and security is a concern in the association. Workers’ concern is legitimate too. Probably an organisation of domestic workers can verify workers and give ID cards to them. Or may be the labour department can later take over the database that is being created now.”

But most people believe that registration should be at police department itself as this will “instil fear” in workers. More importantly, they believe registration will prevent workers from moving into better jobs, as their work history and previous employers’ details will also be recorded.

“Even if I give good salary, workers keep moving to jobs that have better salaries. They should be trained in etiquette also if possible. Registration should be extended to independent houses as they have lesser security than apartments,” says Annapoorna Murthy, resident of JP Nagar 2nd phase and President of Manjari Ladies Association.

Babji V S, President of Poorna Palace Residents Association, says, “It is common to have one’s identity checked at the workplace. It will be useful especially in larger apartments where everyone does not know all workers by name.”

Currently most apartments issue ID cards to domestic workers – the cards would have their name, photograph and address, and further details are not verified. Workers are usually hired based on references from friends or acquaintances.

Employers opined that once the programme starts off, they would only hire workers who were registered with the agency. However Police has been saying that the programme is not discriminatory, as workers have the option to not register.

Domestic workers who had participated in the protest believe that they may not be forced to register. Pushpa says, “The Commissioner had assured us that we can file complaints against anyone who forces us to register.” But employers’ pressure might eventually force workers to register even if they do not want to – another issue DWRU has been pointing out.

Top police officials also support the programme indirectly. Suneel Kumar says, “such programmes are necessary to prevent crimes. Police will access this data in case of crimes. If the company is ready to train the police in using the database, we will be open to that.”

No hard data on domestic workers involvement in crimes

On the other hand, Geetha says that DWRU looks into 7-8 cases annually, of domestic workers being abused. These are not police complaints, and are usually solved by negotiations. She says that abuse is routine, but that workers come ahead for support only if there is no way out.

“Workers usually try to sort out the issue with the employer directly. Only if they are barred from entering the apartment or if they cannot approach the police, do they come to us. Many workers are unaware of the union; they do not think about their rights and hence think union is unnecessary as well,” says Geetha.

While those like Pushpa say that they should not be criminialised through registration, there are also workers who consent to the programme. S Vannamma, a domestic worker in Raheja Residency, Koramangala 1st block, says that she would register as it might reduce chances of being harassed by employers.

“Currently there is no proof that I work here. There are workers who are harassed by employers – they are not paid salaries or are asked to leave suddenly. Having an identity may help,” says Vannamma.

The city police do not have a specific system for registering domestic workers currently, but anyone can apply at the Commissioner’s office for background checks of individuals, for a fee. “We receive most applications for checking backgrounds of professionals, from the companies which are planning to hire them. Checks on domestic workers is less in number,” says Kumar.

“Government ignores us because we aren’t educated and rich”

They are the ones who go out in a majority on election day and vote. But very little has been done for Bengaluru’s poor. Second in a series of two articles, Citizen Matters gets down to brass tracks.

After 10 years of Bengaluru expanding to be ‘Bruhath’, the plan to provide water for all newly included villages is yet to materialise. How long before Cauvery water reaches all areas?