Improper waste management and burgeoning population of stray dogs could easily be considered as two ubiquitous problems plaguing the city of Bangalore. Animal welfare activists have for long claimed that the two might be correlated. They argue that availability of food in the form of garbage spurs the increase in population of stray dogs. Instead of culling the canines, BBMP should concentrate on implementing effective solid waste management system. 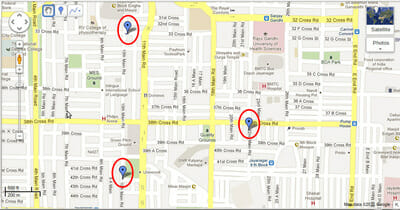 Three garbage dumps marked in a one kilometre radius in Jayanagar

‘Voice of Stray Dogs’ (VoSD), a pressure group, has launched a collaborative project, ‘X marks the spot’, where citizens can mark garbage dump spots in their neighbourhood using Google Maps. "We have always stressed that increasing urban stray dogs are a symptom and are not a disease themselves," says Rakesh Shukla, a city based entrepreneur and founder of VoSD. He adds that one of the factors influencing the population of stray dogs is availability of garbage as most dogs scavenge on the waste. "ABC is an effective way but to curtail the breeding population, you should control the food that is available," Shukla adds.
Google Maps is used to mark, with photographs, all areas in Bangalore which either have an open garbage dump area or open BBMP garbage segregation area. The former is marked in blue while the latter is marked in pink. The aim is to help citizens and BBMP monitor garbage collection.

The project, which has no fixed time-line and is open-ended, has 16 spots marked on the maps, however, no photographs have been uploaded yet. To participate, one has to send an email to info@strays.in indicating which area they want to mark. They will then be sent simple instructions on how to make change to the map. "We do this so that changes are not made randomly. We will review the inputs to verify if the details uploaded are correct," says Shukla.

Much ado about Dhanvantari park

The move to install an idol of Dhanvantari and a shelter for the same in a JP Nagar park, has become a controversy. This and more updates from JP Nagar in the last fortnight.

HC orders BBMP elections by Dec 31, but reservation issue yet to be resolved

BBMP has made new plans to solve the problems of garbage and potholes. Read more in our roundup of last week’s news.