After Once Upon a Time in Mumbaai, the Milan Luthria-Ekta Kapoor-Shobha Kapoor trio are back with The Dirty Picture, and it’s a collaboration that holds much promise for Hindi cinema. 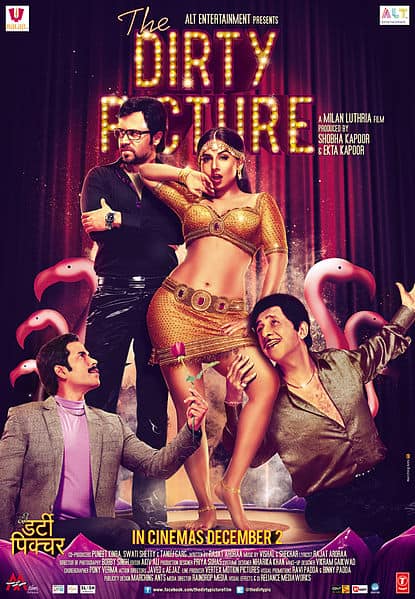 While one misses the edgy unpredictability of Luthria’s earlier film Taxi No 9211 or the grit of Once Upon a Time in Mumbaai, The Dirty Picture creates its own cinematic place. While based on the story of South Indian female actor Silk Smitha, the film also explores sensuality on celluloid and the meaning of success. But be warned that the film is not a biographical history. Instead, it is a culmination of different influences and lives of many Indian actors, the most notable amongst them being Silk Smitha.

So while the resulting story line is predictable and hardly revolutionary, razor sharp dialogues give this film its edge. Even as loud chuckles and guffaws repeatedly fill the cinema hall, they are punctuated by silence, and the audience introspects.

While taking the mainstream route, Luthria’s film is laced with themes like the ambivalence to sex and sensuality intrinsic to both Indian cinema and modern culture. But the tone is always tongue in cheek, and never moralistic. The end result is that Luthria plays to the gallery, but makes his questions relevant to his audience.

Beyond the film’s intelligent wit, The Dirty Picture rests on powerful performances from the film’s lead actors. Though the role is different from anything that Vidya Balan has done in the past, she falls into the part with ease and complete commitment. There aren’t too many other female actors who would allow themselves to develop and display a pot belly on the silverscreen.

Besides the physical changes necessary to play Silk, Vidya brings many layers to her performance. In a single role, she epitomizes the innocence of the child woman, the playfulness of the raunchy seductress, the consuming passion of a woman in love, the spunky professional in a man’s world and the deep despair of a woman slowly going over the edge.

Both instinctive and intelligent, Vidya is not merely mimicking Silk Smitha. While she adopts her name, she plays the eternal vamp of Indian cinema. Through her, Luthria reflects that celluloid sensuality and seduction are often a mind game. Here only the toughest can survive.

In the spirit of all the great vamps who have gone before her, Vidya is bold, provocative and even outrageous, but she is never vulgar. Vidya’s greatest contribution to the role is the spunk, soul and dignity that she gives her character.

But if the film strikes a false note, it is perhaps with Emran Hashmi. Particularly the song Ishq Sufiana, which  is also picturised on him, is ill timed.

I would go with a rating of 3 on 5 for The Dirty Picture. Finally, after a long break, Hindi cinema once again gives us a film of stellar performances and many layers.

1: Watch this film only if the director pays you
2: You could safely give this film a miss
2.5: A one time watch
3: Good cinema. Money well spent
4: Great cinema. A standing ovation
5: Simply speechless. A masterpiece.⊕

More such stations in the city will help more people reach their destinations faster without hassle, says Khader Syed.

Girish Karnad, the wordsmith who never shied from stating a contrary opinion

Karnad has been the voice of a generation that fought against religious dogma. He championed dissent, even when it was against him, teaching us about the quiet dignity of being adversarial without being disrespectful.