Citizen Matters in its investigation found out that part of 6th Cross, 24th Main, 2nd Phase JP Nagar which was thought to have been encroached by land sharks might not be encroached at all. On 24th Main, the entry to 6th Cross has been blocked by a compound that now houses a used car showroom. The stretch was earlier being used by locals as a road, however, it did not have any street lights or have a pucca road. 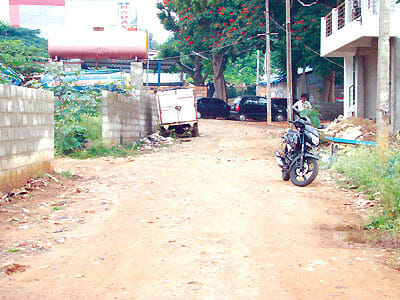 The road as seen from behind the used car showroom.
Pic: Yogaraj Mudalgi

A copy of the approved layout plan for 2nd Phase JP Nagar, obtained by Citizen Matters, from the BDA shows that the 6th Cross does not join 24th Main Road and is only an internal road.

When Citizen Matters spoke to Venkatesh, BBMP Assistant Executive Engineer, he said that the stretch of land was converted to a plot some time in the eighties. "It was a village road earlier but since the connectivity has improved, it was decided by the BDA to convert it into a site," he says.

Bangalore Mirror, a city tabloid, on 1 October, reported that a sizable tract of land had been usurped by land sharks. The report also quotes H Siddiaiah, BBMP Commissioner, saying that he is aware of the encroachment and action will be taken soon.

Several locals too seemed unaware whether it is a public road or private property. Keshava, 40, who had an eatery stall on the road for more than 10 years, moved to a new place nearby after he was asked to vacate. "They told us that it is not a road and that it belongs to someone else so I moved," he says. Anuja K, 42, a home maker, living nearby too said that she had assumed it was a road as everyone was using it but didn’t know much about it.

The alleged owner of the land, Bette Gowda, lives nearby. His wife, Lakshmi Gowda affirmed that they were rightful owners of the property and that they had not encroached on public property. However, she refused to furnish any documents.

Questions on how to manage COVID waste, whether common facilities can be opened up, etc., have vexed apartment RWAs. In a recent webinar, BBMP officials clarified many of these doubts.

Festival spending, for many people, has been affected due to the increase in costs of flowers, sweets, gold and clothes. From lower income citizens cutting back on buying clothes and postponing college to well-heeled folks holding off on buying gold or leisure traveling, its a different story everywhere.