In the Sankey road widening case, the High Court ruled in favour of BBMP on Wednesday, November 30th. BBMP’s contention that it had the authority to cut off scores of old growth trees on Sankey Road was upheld.

Malleswaram Swabhimana Initiative – had argued that BDA had not indicated widening of the road in its draft Revised Master Plan 2015 (RMP) and hence public had no chance to object to the widening. BDA’s lawyers however argued that widening of the road to 30 metres was indicated in the 1984 and 1995 master plans and that public could have objected to the widening at the time. BBMP draws it road widening projects from BDA’s master plan. 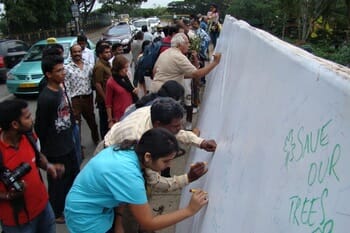 [Edit]
Residents writing on a white board during a silent protest in the evening of July 1st, after 17 trees were cut down. File pic: Yogaraj Mudalgi.

"More than 200 trees maybe cut along the entire stretch for this. We did argue about the environmental cost of the project, but court did not consider it," says Meenakshi Bharath, one of the petitioners. Meenakshi is a well known civic activist in Malleswaram and also ran for city council from there in 2010 on the Lok Satta party ticket.

Matters came to a head in July this year when BBMP cut 17 trees in the Malleshwaram area of Sankey Road, irking citizens, and setting of a wave of protests. Police manually ejected protesters amidst heated arguments. Some citizens were arrested, including a retired BBMP official who joined cause. Several college students were detained.

The dispute then moved to the High Court after the latter issued a stay with two trees standing.

Currently BBMP plans to widen the road to 27 m.

For the time being, the ruling will be seen within government as victory for pressing on with its roadwidening projects, trees or no trees. The court ordered that widening of the entire road from Yeshwantpur to Cauvery junction should be completed within a year. ⊕

This week’s scan of Bangalore’s Kannada dailies includes a number of reports from number of illegal foreign residents to police pondering over seasonally fluctuating crime rates and more.

Govt support is only way BMTC can survive COVID: Experts

BMTC has been sustaining huge losses ever since COVID. What options does it have to ensure sufficient services?

Can we avoid steel flyovers and other faulty projects in future?

Could systemic public engagement prevent imbroglios of the kind created by the Bengaluru steel flyover proposal? What steps and caveats would be necessary for that?