A forlorn young boy, nestled next to the feet of his friends perched on a platform, gazes on into the distance, unmindful of the camera. The telling photograph was chosen as the winning entry at the ‘Frames of My City’ contest organised by Red Frames, a Bangalore-based photography website. Shot by Kolkata-based photographer Jayanta Roy, it was picked from among 7,800 entries by 1600 photographers from over 250 locations. 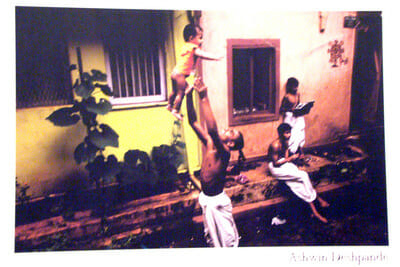 Roy says of the photograph, “I shot it at a slum near Kolkata. Several boys were playing and the boy was just sitting there. He did not react to the camera. After I finished shooting, someone told me that the boy had lost his mother a few days before.” Roy has won several awards including the National Geographic Award in 2004.

The winners of the photography contest were declared on Friday, 25th November at Alliance Francaise de Bangalore, Vasant Nagar. The contest began on 29th August. The entries were judged by Abhishek Poddar and Nathaniel Gaskell of Tasveer, pan-Indian photography gallery in London, United Kingdom. The winner won a Royal Enfield 350, the runners up won 16 Gigabyte Apple Ipads and the special mention awardee was given a Sony home theatre. Two Red Frames Exclusive award winners were given Titan wrist watches.

Selvaprakash, 33, a city-based photographer for a magazine, won the special mention for his photograph of a family of migrant labourers near Hebbal. “I was interested in the subject of distress migration of families, specially from North Karnataka. I was passing through Hebbal when I saw this family and it seemed interesting to me. Though it is nice to win the award, i don’t feel any joy as I am portraying someone else’s misery,” says Selvaprakash who moved to Bangalore five years ago.

Fifty photographs were showcased at the gallery in Alliance Francaise De Bangalore over the weekend.

Well-known photographers, Ram Rahman and Amit Madheshiya showcased their works and gave a brief talk on photography at the event.

Rahman spoke about his sojourn into photography. The son of architect, Habib Rahman and danseuse Indrani Rahman, he took naturally to architectural photography as a profession but his foray into wielding the lens began with clicking photographs of people he was acquainted with. “I never ventured out to hunt for opportunities to shoot. My social milieu provided me excellent opportunity to shoot pictures. These became a sort of documentation of the people around me,” he said. The lensman is currently documenting the rehabilitation of Humayun’s Tomb and other nearby archaeological sites in Central Delhi.

White form? Blue form? What is PID? How do you calculate the tax? All these questions are answered here in this property guide.

Poster women captured in a book

The book captures the history of women’s movements in the country through colourful posters. The launch witnessed a discussion on the relevance of these movements today.

A group of 26 artists from Kerala exhibited their paintings at Karnataka Chitrakala Parishat. The IIC gallery hosts an exhibition of the cartoon collection of K R Swamy, titled ‘Laughter Dose’.