Sharmila,16, and her five younger sisters were brought to Child Fund Association (CFA), an orphanage home in Puttenahalli, after their mother passed away. Their father, visually challenged, could not take care of them. Sharmila, who is from Kollegal, has been living there for 6 years. "I am lucky to have found a place like this to live," she says. 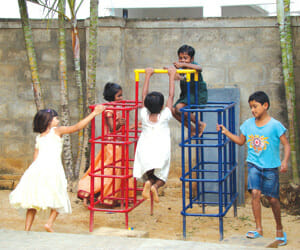 Eighty-five children, mostly girls, have found a home in CFA and since its beginning in 1982, close to 750 children have grown up in the home. Most children in the orphanage have a traumatic past and are orphans or have single parents unable to take care of them. While some children are brought by their relatives, some, living as destitute, are picked off the street by the police. The objective of the orphanage is to rehabilitate the children with proper education and nurture them to become healthy self-sustainable adults, says Mary Isaac, who started the home with 25 children in 1982.

The home functions as one family as the older children help out the younger kids by washing their clothes, tutoring them, ensuring they eat their meals. "Each older kid is assigned two young ones to take care of so it is not difficult for us to manage," says Hema K, 32, one of the three wardens. Most of the children go to nearby Vinayaka Vidyalaya or a government school. Volunteers take tuitions in the evening to help the children out with their studies. "After 10th standard, we try to find vocational training or sponsor higher education, depending on their interest," says Mary.

Mary says that they are fortunate to have generous donations of clothes and food but the bigger challenge is to provide them with a good education. "We spend about 14-15 lakhs a year to take care of the children, of which six-seven lakhs is spent on their education. We barely manage to raise money for their education," says Mary.

A resident of Jayangar 4th Block, Mary, now 72, was a member of Jayanagar Ladies Club. She felt the members could do more than just cooking demonstrations. "The State government was then calling NGOs to come forward and open orphanages. We formed a group of 15-16 housewives and started the orphanage in a home in 4th Bolck Jayanagar." In 2000, the NGO managed to raise enough money to buy land and construct a spacious home in Puttenahalli.