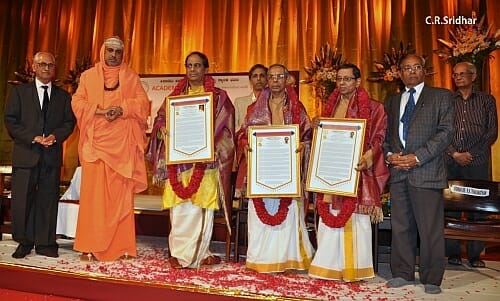 After vedic chanting and a prayer, the programme began with a welcome speech by Dr G K Veeresh, President of the Academy of Music. Later Subbaraj Urs, Secretary outlined the grand plans of the Academy in the coming year to celebrate its golden jubilee with a music festival and other programmes. Dr K S Vaishali, Jt Secretary formally introduced the noted musician, Seshagopalan popularly known as TNS to the august gathering and spoke of his achievements and excellence in the field of music.

Sri Shivarathri Desikendra Mahaswamigalu of Veerasimhasana Samasthana Mutt, Sutturu Sri Kshetra, Mysore honoured the awardees with a violin shaped memento besides the customary gifts and then conferred the award.  T N Seshagopalan in his acceptance speech said that he owed the honour to his rasikas.  Remembering his Guru Ramanathapuram C S Shankara Sivam on the occasion, he also said that to be a musician, one should be blessed by God. While recalling the services of his Paramaguru Harikesanallur Muthiah Bhagavathar who was the Asthana Vidwan of the Mysore and Tiruvananthapuram Samasthanams, he spoke of his connections with Karnataka since long. He expressed his happiness on receiving the award along with the Rudrapatnam Brothers.

In his speech, R A Thyagarajan said, he along with his brother Dr R A Tharanathan stuck to classicism as they were of the firm view that it would pave way for future generations to follow it and be enlightened. A music concert should not only be recreative but also educative at the same time.

The Swamiji of Sutturu Sri Kshetra spoke of the divinity in music which while removing one’s ego also resulted in a positive attitude and a good frame of mind. He regaled the audience with his deep knowledge on music and struck a chord with his sense of humour.

This well attended function ably compered by Sandhya concluded with a vote of thanks by K Prasanna Kumar followed by an electrifying vocal concert by Vidwan T N Seshagopalan who was accompanied on the violin by Ravi, Mrudrangam by Trichur Narendran and Guruprasanna on the Khanjira.

About C R Sridhar 9 Articles
The author has not yet added any personal or biographical info to her or his author profile.

Should caregiving of street dogs be encouraged?

How do we address the dog-people conflict? Remove them or care for a million animals? Or can we have an effective Animal Birth Control programme?