On November 1st, KSPCB released a guide on Sewage Treatment Plants (STPs). In this exclusive interview with Citizen Matters, KSPCB Chairman A S Sadashivaiah talks about how the guide will help, and clears the air on many issues that resident associations have been raising on STP maintenance.

Most apartment complexes today have their own Sewage Treatment Plant(STP). According to KSPCB rules, any large apartment (more than 5,000 sq m in the outskirts or more than 20000 sq m in core areas) need to have STPs.

The new guide has illustrated explanation about the working and engineering features of STP, and the operational checks required at each stage. The guide is also expected to help KSPCB officials on the parameters they need to check during inspections. 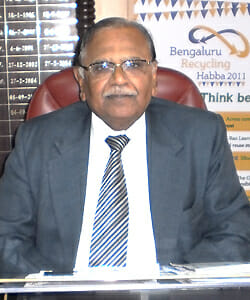 So far the Board did not have well-defined parameters for inspecting STPs and inspections were rare. Now that the parameters are defined in the guide, will you hold inspections regularly?

Yes, there will be more inspections. We will fix the periodicity for inspections. But there is large number of STPs and it is not possible to inspect them frequently. We still have staff constraints, so it may be outsourced to an external agency. This is still under consideration. For now, our own officers will inspect – they have to get used to the new guidelines. Also the STPs themselves have to be properly mapped first.

We will also call a meeting of RWAs one day to educate them on their responsibilities and about the new guidelines. They can buy the STP guide from us too. We will inform them about the need for formal transfer of STPs from builder, possible loopholes in their agreement with builder, transfer of corpus money etc. Many times residents realise these things much later – sometimes builder transfers the STP too early even before the entire apartment is occupied or organised – causing issues in maintenance. In the case of Sobha Builders we have reached a consensus that the builder will be responsible.

[Note: The builder is considered the “occupier” of the STP till he hands over the STP to the Management Committee of the Association in a formal process. During this period, the builder is held responsible for any technical deficiencies in the STP.]

Would you say that the new guide comprehensively addresses STP issues?

It is an evolving, continuous process. Depending on problems faced from time to time, we will include more items and parameters for check up. The guide addresses many issues that we had no clarity on earlier. It was written by an expert, our officers had discussed it – considerable thought had gone into it.

Does the Board have any way of ensuring that the builder transfers the STP formally?

Ensuring transfer of individual STPs is too much for us to get into. We will raise awareness among residents so that they take on this responsibility.

Anyway the onus is on the builder – STP will be builder’s responsibility so long as it is not transferred to the registered RWA with a formal agreement. Terms of maintenance of the STP should be specified in the agreement.

In fact we prefer that the builder continues to maintain the STP; there are many builders that are doing this very well. Residents are not always aware of proper ways of maintenance and may let the STP deteriorate.

So if the STP starts malfunctioning after the handover, will it be the residents’ responsibility to repair it?

That will depend on the terms of the agreement. If the part that is malfunctioning is the builder’s responsibility as per the agreement, builder will have to correct it. Else it will be up to the residents.

If residents approach the Board with complaints against builders for poor maintenance of STP, will the Board take action against the builder as per Water Act?

Yes, we will. Residents can approach us.

There have been complaints about apartments being included under RED (highly polluting) category along with industries, and hence apartments having to pay high fee for operating their STPs.

Yes. Apartments are not industries, but they are considered to be under RED category due to their STPs. For that matter, BWSSB STPs are also under RED category. Board can change this classification if required; we have the power to decide on it. But for now STPs are in bad shape in general, and we want to sort them out first. So we are not considering category change now.

Apartment associations have to pay fee annually for renewing their CFO (Consent For Operation) for STPs. If an apartment performs well – maintains their STP well – we allow them to get a CFO that is valid for 3 or 5 years if they pay the corresponding amount for that period. We can still initiate action against them if there is non-compliance. For poorly maintained STPs, CFOs have to be renewed annually.

Also, apartments are charged CFO based on the capital investment of their complexes rather than the amount of waste they generate. Is there any rethink on this from the Board?

The Board has not been able to standardise fee based on pollution load, because of our own vagueness on these issues. For now the fee is based on our rules, but this can be changed – volume of sewage can be considered instead of capital investment. Currently we are not discussing it, but we can put our mind on it and work out a solution.

[Note: Many RWAs are protesting the KSPCB fee amount saying that they are being penalized with this exorbitant KPSCB / BWSSB fee, in the range of Rs 50,000 to lakhs, while independent houses and apartments that let sewage into the BWSSB STPs do not have to pay. They say, “the fee currently is also based on capital cost of the whole complex instead of just the capital cost of the STP plant. Better plants with costlier systems are penalized, while cheap rudimentary STPs benefit.”]