A week after Bengaluru’s police department said that the Police Complaints Authority (PCA) for Karnataka did not exist, the Home Department says that the authority does exist. It turns out that in December last year, the state government quietly setup the body through a government order. The PCA is meant to be a state-level independent authority to inquire into public complaints against police officers.

On November 11, civil society group IAC (India Against Corruption), Bengaluru, had submitted a petition to the city Police Commissioner’s office, demanding setting up of a PCA. Additional Commissioner of Police Suneel Kumar, who had accepted the petition from IAC then, had said that PCA had not yet been formed.

Subsequent to the Home Department admission that a Karnataka PCA exists, Citizen Matters found out that ironically, key figures in the authority themselves do not seem to know about their appointment. 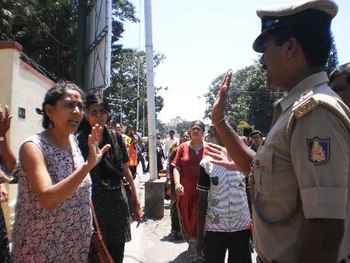 What might start with citizens arguing with the police during a protest could result in an abuse of power. An independent Police Complaints Authority is supposed to help both citizens and police have a fair inquiry. This file shot is from a protest by women in front of the Karnataka Film Chamber of Commerce (KFCC) in September. Pic: Navya P K.

Bangalore’s IAC group had demanded the formation of PCA after an incident of assault involving an IAC volunteer and a traffic police inspector. An independent PCA is supposed to accept public complaints on abuse of power or atrocities committed by the police. The police itself cannot investigate such cases as the department would be biased towards its own officers. PCA can investigate cases and submit its recommendations, based on which police or other authorities should take action.

The Supreme Court had ordered the states in 2006 to setup PCAs as part of police reforms.

Speaking to Citizen Matters, Raghavendra Auradkar, Secretary of the Home Department, confirmed that in December 2010, the state government passed an order (GO) sanctioning the formation of Police Complaints Authority (PCA) at the state and district levels.

Auradkar claims that the PCAs are functioning already. "For the state level, the Chairman was appointed in September," he says.

Citizen Matters has reviewed a copy of the December 2010 GO and the letter of appointment of the Chairman of the state PCA. Home Department had appointed Retired HC Justice R J Babu as the State PCA Chairman in September. But the other two members have not been appointed yet.

"We have received nominations for the other two members, and they will be appointed in a week," says Auradkar. He also says that the district PCA is already functioning under the Regional Commissioner (RC). When Citizen Matters called the RC’s office, officials there were not aware of the PCA. Newly appointed RC Shambhu Dayal Meena was not available for comment.

IAC volunteer Anand Yadwad says that they would contact the RC asking him to investigate last week’s assault issue. "We have not been able to track the PCA authorities. We will get in touch with the RC and give him the petition soon. We tried to contact the state PCA Chairman, but authorities including the Home department did not have his contact number," says Yadwad.

Meanwhile, Bangalore’s police department remain clueless. When asked why it had missed information on the GO, ACP Suneel Kumar says that he will check about it. "We might not have missed it. Government orders reach the administrative section of the Commissioner’s office, we will check," he says.

The PCA’s quiet constitution seems to have missed everyone, including the city’s human rights lawyers who are usually at the forefront of fighting police abuse cases. B N Jagadeesh, Lawyer at Alternative Law Forum, says, "I am not aware of the PCA. In cases of police brutality, we either go to the State Human Rights Commission (SHRC) or to the court directly." ⊕

Despite lack of response from the government, anti-CAA protests are only intensifying in Bengaluru. What has brought people from diverse backgrounds together for these protests, and how have they kept going?

Has your apartment got a ‘verification notice’ from Bengaluru City Police?

Police has asked apartment associations in the city to submit details of all current and former residents. But associations say this violates residents’ right to privacy