The 2011 Bangalore Ultra Marathon took place on Sunday, 13 November, at Hesarghatta. The marathon, organised by Runners for Life, a community of runners, is in its fifth year. This year, the Ultra had five courses – 12.5, 25, 37.5, 50, 75 and 100 kilometres. The marathon was open to people of all nationalities. 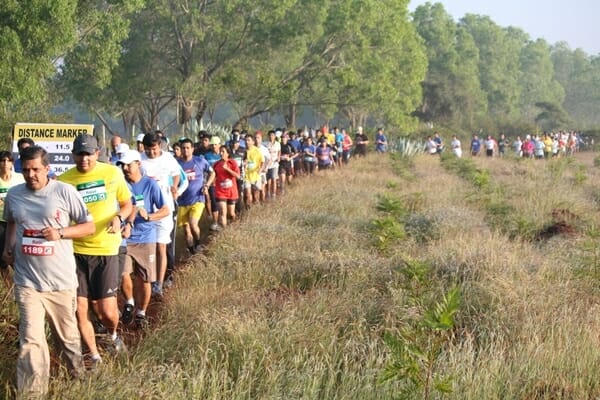 More than a thousand people participated in the Ultra Marathon. Pic courtesy: Veloscope

Winner of the 50 kilometre course of Bangalore Ultra Marathon, Athreya Chidambi, finished the race in 3 hours, 58 min and 56 seconds; missing out on breaking the course record by one minute. The thirty-three year old graphic designer has participating in the Ultra Marathon for five years now, winning the 75-kilometre course two years ago. Chidambi says that the trail was challenging but apart from sore legs, he is feeling fine. Speaking on his training routine, Chidambi says “I run once in the morning and then cycle to office. On weekends I go on long runs.” He cycles from his home in Cooke Town to his office on Old Airport Road, HAL.

Athreya Chidambi is the winner of the 50k category. Pic courtesy: Veloscope

Results of the ultra marathon 2011