If there is an area where Hindi cinema has never quite got it right, it’s science fiction. So as Hindi cinema’s most expensive film ever and with the might of Shahrukh Khan backing production, Ra.One raised expectations. But in an age where films like Matrix, Avatar and Inception are routine, director Abhinav Sinha’s Ra. One does seem like it’s 20 years too late.

The film based on a three-page story penned by Abhinav Sinha, was inspired by a commercial. Yet it’s interesting that Sinha was Shahrukh’s choice for director on Hindi cinema’s most ambitious project till date. While Sinha earned his reputation with the television show Sea Hawks on UTV, his most successful feature film was Dus. With Ra.One, the gamble does not seem to have paid off.

In this film, Sinha tells the story of gaming developer Shekhar Subramanium (played by Shahrukh Khan), whose world changes when characters in his recently designed video game enter the real world. Superhero G.One (Shahrukh in a dual role) must take on super villain Ra.One (Arjun Rampal) in a deadly duel to save Shekhar’s wife Sonia (Kareena Kapoor) and son Prateek (Armaan Verma).

But the movie that saw Shahrukh get involved in every aspect of film-making-from production to screenplay writing-does not come together in the tradition of a true Hindi cinema entertainer.

Loose editing means that film has many parallel threads that both diffuse the emotional impact and take the stride out of what should have been a fast paced action film. Dialogue writing is not clever enough and there’s not enough of ‘Shahrukh’ either to pull the film along. So unlike Enthiran or Dabangg that ride on power of their superstars, Ra.One falls through on that parameter as well.

Predictably, not enough attention is paid to small details. So besides a very strange wig, Shekhar Subramanium’s Hindi is always better than his Tamil.

The true-blue science fiction buff will also find the film’s much touted use of technology tacky, with G.One looking obviously patched onto the landscape in some of the fighting sequences. The plot is often simplistic, requires tremendous leaps of imagination and does not have the multiple layered complexity that we have come to associate with twenty-first century science-fiction cinema. Missing also are interesting characters like the Joker in Batman to give the film just enough spin to keep you intrigued.

The highpoint of this film remains Arjun Rampal’s scorching performance as Ra.One, even as he continues to grow in leaps and bounds with each new release. But that alone is insufficient to the save the film that fails to live up to the promise of chamak challo. In the final analysis, Ra.One remains a slightly apologetic blend of a Hindi cinema entertainer and a Hollywood science fiction film.

So it’s rating of 2 on 5 for Ra.One. The only thing you miss when you don’t watch this film is the promise of much hype left unfulfilled.

Backing the film Ra.one is the graphic novel G.One’s on the film’s official website, which also gives us the background to the gaming video developed by Shekhar Subramaniam in the film. With concept & backstory from Shahrukh, creative direction by Shailaja Gupta and writing by Rakesh Ramchandani, the novel is a first for Hindi cinema and is also testimony to the huge effort invested into the making of Ra.One. 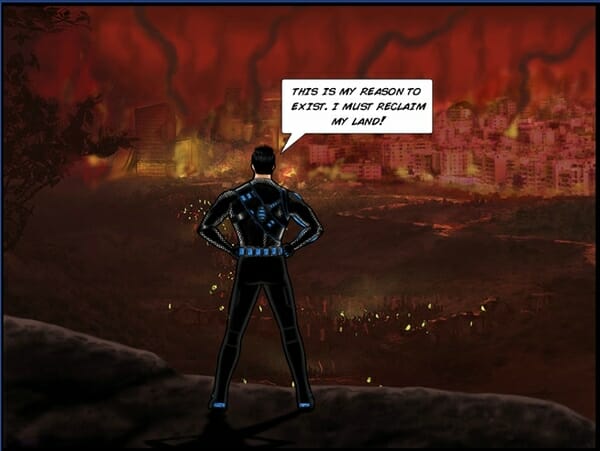 With world-class design standards, the graphic novel has all the right ingredients that make a superhero narrative – a human with superhuman powers fuelled by inner torment, a world that must be saved and a dark villain to be combatted. However, like in the film, jumps and shifts in storytelling prevent a compelling narrative. But in the case of the graphic novel, the producers may have been guided by the compulsion to fit an intergalactic struggle into a 40-page comic book.

Yet G.One, the protagonist of the graphic novel, has far more superhero potential than his celluloid companion. While the graphic novel has been developed as a separate product from the film, it does end with the promise that there will be more adventure comics that follow. It would be interesting to see if production house Red Chillies Entertainment does live up to its promise. This at least is an innovative product with potential, if creative development does move in the right direction.

1: Watch this film only if the director pays you
2: You could safely give this film a miss
2.5: A one time watch
3: Good cinema. Money well spent
4: Great cinema. A standing ovation
5: Simply speechless. A masterpiece.⊕

The mild showers are bringing in some films too, this season. Two film festivals with over 30 films wait for film lovers.

Film fest on conflict and resolution