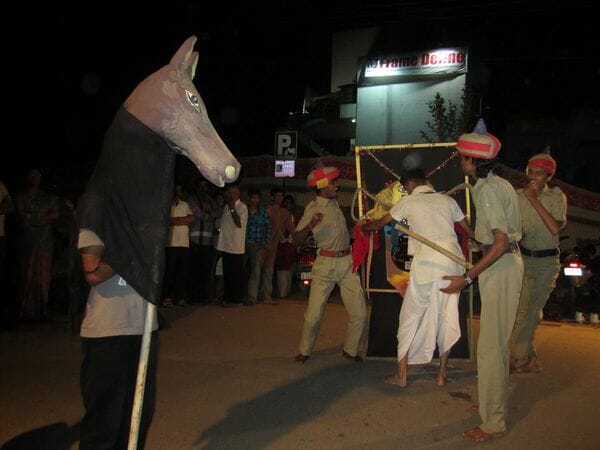 This year’s theme was "Political Theatre," a controversial topic that brings out debate, and creativity, in people. Keeping with the theme, there were several contemporary folk theatre performances and documentaries screened, with vigorous discussions at the end.

Sadanand Menon’s workshop on Theatre and Arts Appreciation was very well-attended, as was the seminar on the same theme. "It was wonderful to have nearly 200 people attending," remarked Arundhati Nag with visible satisfaction. She then went back to her phone conversation, trying to tie up the loose ends that invariably occur over the course of a Festival.

Nagalakshmi, as she’s known, a regular at the Festivals over the years, says she cannot apply the word "enjoy" to the disturbing, telling documentaries that "Nero’s Guests" and "Iran is not the Problem" were. Prakash Belawadi, the Festival Director, moderated the discussion after "Nero’s Guests." The mood of the audience was rather subdued. They had just been told several "inconvenient truths" about themselves – that their apathy was as much to blame for the political scenario of corruption, as the government and its short-sighted, exploitative policies.

Students marked their presence at festival with platform performances. There was "I Got Caught", by the BMS College of Engineering, and Street Theatre Performances by the JSS Academy of Technical Education and National College, Basavanagudi. The age group is traditionally a fertile ground for both politics and theatre. They were very short pieces, yet they found an interested audience.

Dramatists from other countries  were represented too. Suchitra Centre for Film and Drama presented a play called "Tango", which was by Slawomir Mrozek, translated and adapted by Ralph Manheim, and directed by Anmol Vellani.

The festival was not restricted to the stage alone. A collection of excellent political cartoons brought another dimension of the creative arts to Ranga Shankara. The collection, curated by K T Surendra, a well-known political cartoonist, had many visitors, looking both amused and thoughtful by turns, as the messages given by the cartoons were absorbed.

‘Thaazhi,’ a colourful addition to the ambience. Pic: Deepa Mohan

Sankar’s Bookstore had an eclectic collection of books, DVD’s and magazines. Visitors browsed through the selections and often took away what they might not have been exposed to, otherwise. The printed word often brought theatre and its concerns to those who could not attend the festival.

Ranga Shankara Cafe, under the able supervision of Anju Sudarshan, was a beehive of activity all day long. Volunteers, actors, crew members, audience members, everyone used the cafe space as a meeting and discussion platform. Many performances, such as the Yakshagana performance, or the "Greek chorus" feature of the play "Nammoora Benkibaakaru" were discussed threadbare.

The team at Ranga Shankara, Ruhi, Jagganna, Srinivas, and the band of hard-working, willing, courteous volunteers must take a lot of credit for making the festival a success. "Problems crop up all the time, and most of them are unexpected!" smiles one volunteer, who did not wish to be named. "Sorting them out, and making sure that the paying public is not put to inconvenience, is quite a task," she adds.

The decoration of the foyer area at Ranga Shankara is also one of the things that visitors look forward to. It is amazing how much creativity can be indulged in on a budget! Some beautiful cut-outs, a lovely "poo kalam" in the traditional brass "thaazhi" a brass vessel from Kerala, flowers and lights and a wall that visitors were encouraged to write on. There was so much to see and enjoy, whether one wanted to attend the play or not.

In all, the 2011 Theatre Festival once again showcased Ranga Shankara as a venue where the cultural and fine arts are displayed to great advantage. It was a space where the common man or woman of Bangalore could enjoy some quality productions, both on the stage and off without paying vast amounts of money and reflect on the state of the political theatre today, both in India, and abroad.⊕

Silks to substations – Sarjapur through the years

Today Sarjapur is witnessing unprecedented residential and commercial development. What was Sarjapur like, a century ago? Is there anything left, that holds the key to its glorious past of silk markets and surveys?

Over 500 senior citizens took part in a protest in Cubbon Park, demanding better implementation of pension policies and other government schemes meant for them.

This is a story about one young city lad who recovered from a near fatal accident. Helped by courage, strength, support from his family and friends, and a rare show of determination and fighting spirit.