Street play is one of the most basic forms of theatre. It is truly theatre of and for the masses. No special stages, elaborate sets, props, or costumes are required, no time is wasted, no special environment is created, and no fee is paid-yet, street theatre can speak directly to the heart of the viewer.

The energy and vitality of performing in a public environment to a public audience also makes street play the perfect vehicle for political protest and propaganda. In India, the name of Safdar Hashmi is synonymous with political street theatre.

The Ranga Shankara Theatre Festival 2011, in line with its political theme, provided a platform for college theatre groups to stage street plays before the main performances. I was fortunate to watch three of the four street plays.

The college groups were contacted by Ranga Shankara, and a list of themes was given. Each group could choose a theme and develop a street play based on it. Guidance and facilitation was provided by well-known theatre artistes including Gowri Dattu and Shashidhar Bharighat. The performances were staged on the road in front of Ranga Shankara in true street theatre tradition.

I first watched the team from PESIT take to the streets with their performance ‘Ivara Prana Yaara Kaiyalli?’ The story was simple and engaging; a young poet goes to a park to compose a poem. He sits under a half-sawn tree (courtesy of government contractors wrongly marking the tree to be cut down), and the tree collapses on him.

His cries for help bring people to the spot, but it is an indifferent and opportunistic crowd that arrives. The man on the spot uses his phone, not to call an ambulance but a TV channel. The TV channel arrives and milks the situation for maximum TRPs. Things are further complicated by the arrival of a green brigade that claims that cutting the tree itself is an offence. The human rights brigade insists on the value of the man’s life over that of the tree. 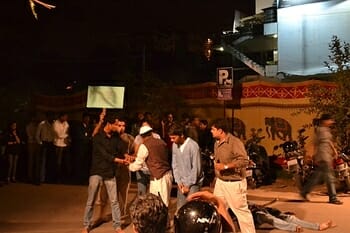 The local politician arrives and does what politicians do best – make empty promises. All this while, the young man lies groaning under the tree. In the end, a sane bystander (perhaps the last remnant of public conscience) urges the audience to action.

The play elicited laughter from the audience for its clever lines, but may not have impacted them any further. It will probably be remembered more for its comic timing than its message. However, it did engage and capture the audience’s attention, a feat for which the team thoroughly deserved the applause it got at the end of the performance.

The second play ‘Avasthe’ was staged by the team from JSS Academy of Technical Education. The theme revolved around the social evil of drinking; the inhabitants of a village are being led to ruin by an illicit liquor dealer who sets shop close to the public school.

Youth of the village protest by going to the police and the MLA, only to find out that everyone is in on the deal. The play stops at a dramatic moment when the youth are arrested by the police, and the audience is asked to react to the situation. The play was tight and serious, and the performers used costumes and music to good effect. I for one certainly remembered the message as well as the performance.

But the third play ‘Kattepurana’ or the ‘Tale of a Donkey’, staged by the students of National College, Basavangudi, was stunning in every way. The tale itself was fabulously constructed. On the one hand is a donkey (an actor with a donkey mask) that makes his master dance to his tunes, and on the other is the king of the land who wants to make his small head fit his rather large crown (an imaginatively decorated pot).

The king’s guru suggests that increasing the king’s popularity would do the trick. Large cut-outs and banners of the king are made, advertisements and films are used to glorify him, and a procession of his picture (a fantastically made framed painting) is taken across the city. However, all this causes people to only laugh at the king. The police decide to prevent this humiliation by banning laughter.

Meanwhile, the stubborn donkey is hired to carry the king’s picture; in the ensuing chaos the king’s picture is turned upside down, making him the object of even more laughter. This fairly light tale (thus far) has an astounding end. The king and his ministers decide that this is the donkey’s fault, and the donkey is hanged. 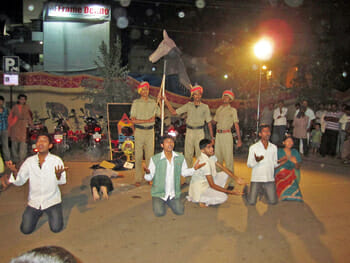 The tale itself had endless possibilities with shades of Orwell in it-the police state, the common man being made a scapegoat, and the ruthless crushing of protest. The actors were excellent in the use of their bodies, voices, props and costumes. The action was dramatic and had a rhythm that held the audience’s pulse. Venugopal of National College said that the play was originally written by Brijesh Sharma of the Jana Natya Manch (JANAM), the street theatre group formed by Safdar Hashmi.

The translated play had been shaped to its current form by Shashidhar Bharighat. Previous performances by this college team had added to their ease of movement, dialogue, and timing. This street play is one that will not be easy to forget; it triggers thoughts and worms its way into your conscience.

These days street theatre in an urban environment finds its worst enemy in the indifference of the audience. Gowri Dattu, daughter of the famous playwright A S Murthy, feels that street theatre is and can still be relevant, especially for a target audience (she narrated her moving experience of meeting a sex worker after a street play on HIV for sex workers).

In the case of the Ranga Shankara street theatre performances, the evolution and development of the theme, interaction with theatre artistes and repeated rehearsals would surely have influenced the actors, if no one else. And that’s a start, for political theatre begins from within the individual.

In earlier articles in the Ground Reality series, we looked at cash shortage, food insecurity and domestic conflict in poor urban households during the lockdown. They are now trying to rebuild their lives. This is about how we can help.

Alongside all the social impact projects that Nihar loves doing, he is a typical teenager who loves playing basketball and hanging out with friends.