With Bangalore Metro set to start from October 20, tickets are being sold at Metro station counters. There are multiple options for tickets – either you can buy tickets for every journey or use an automated smart card. 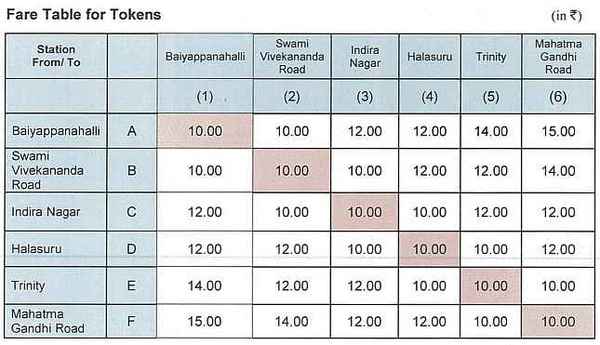 The minimum ticket fare for travelling from one station to the very next is Rs 10. For the second and third stops, the rate is Rs 12. Fare to the fourth station is Rs 14 and that to the last station is Rs 15. Tokens can be purchased at the ticket counters, touched on the pad of the entry gate and dropped into the slot at the exit gate.

Passengers travelling in a group of minimum of 10 between the same stations can buy group tickets. Passengers will get a 10% discount on the fares and the tickets are checked manually at the exit gate.

People planning to take multiple journeys can buy Contactless Smart Cards (CSCs), which also have discounted fares. All cards will have a unique 11-digit number on the back. These cards can be used in two ways – Varshik and Sanchar. The cards are non-refundable and available at the cost of Rs 50. They are being sold at the cost of Rs 100 now, of which Rs 50 will be used as top-up for travel.

Varshik or Stored Value Ticket can be recharged for specific amounts. Varshik offers discount of 15% as compared to regular tickets. The card has to be tapped at the entry and exit gates. The trip fare gets deducted automatically during exit. The stored value can range from zero to Rs 1500. The recharge can be done whenever required in multiples of Rs 50. The card will be valid for one year from the date of last recharge.

Sanchar or Trip Tickets are based on the number of trips. They are targeted at people who travel in a particular route regularly, and allow a specific number of trips between two specified destinations. They can also be used between other destinations which have similar fares. On every trip made between the two destinations, one trip is deducted from the card. Sanchar trips can be loaded onto the card starting from tomorrow only at Metro stations.

They come in four types – Sanchar10, Sanchar40, Sanchar50 and Sanchar100, which will allow 10, 40, 50 and 100 trips respectively. Their validity is lower than that of Varshik cards, at one, three, three and six months respectively. But Sanchar cards offer up to 10% discount of Varshik fares. If a card has both Sanchar and Varshik, whichever fare is lowest will be deducted from the card.

The same CSC can be used for loading either Varshik or Sanchar or both. But currently only Varshik service is available. Top-up for Varshik can be done at Metro stations or at Airtel retail outlets. SBI Account holders can get Debit-cum-Transit card (which can be used both as debit card and Metro transit card) from SBI offices. Metro has also announced that the recharge can be done through SBI ATMs as well as Metro website, but this has not been launched yet.

Other than these cards, integrated tickets for Metro-BMTC buses are also available. MBTs (Metro-Bus Tickets) allow unlimited journeys in Metro and BMTC buses for the day. They are daily passes and are available only for those who already have CSCs (either Varshik or Sanchar). In addition to Metro stations, MBTs will be available in BMTC buses also.

MBTs come in two types – Saral and Saraag. Saral ticket, costing Rs 110, allow travel in Metro and all BMTC buses except the Airport service. The Saraag ticket costs only Rs 70, but can be used only in BMTC non-AC buses and Metro.

In addition to ticket counters in stations, smart cards can be bought online too – on registering with details and making online payment, card will despatched to the person’s address in seven days. Those buying online will also have the advantage of getting the cards blocked online if they get lost or stolen. You can buy online cards here: http://smartcard.bmrc.co.in/

For entering the paid area of a station, the minimum fare of Rs 10 should be paid. With this you can remain in the paid area for 20 minutes. The maximum time allowed for stay in the entire system ie., paid areas of all stations is 120 minutes. Beyond this, a fine of Rs 10 is collected for every additional hour; a maximum fine of Rs 50 can be collected this way per person. ⊕

The second instance I saw birds getting entangled in kite thread and dying, and the officials are yet to look into preventing this disaster.

Neralu – the Bangalore Tree Festival is around the corner. Read what Bangalore’s brand ambassadors, Anu Prabhakar and Nisha Millet have to say about it.