Visitors to the lotus pond at Lalbagh witness a rather sorry picture, where all patches of clear water are teeming with fish close to the surface, mouths open and gulping what they can. 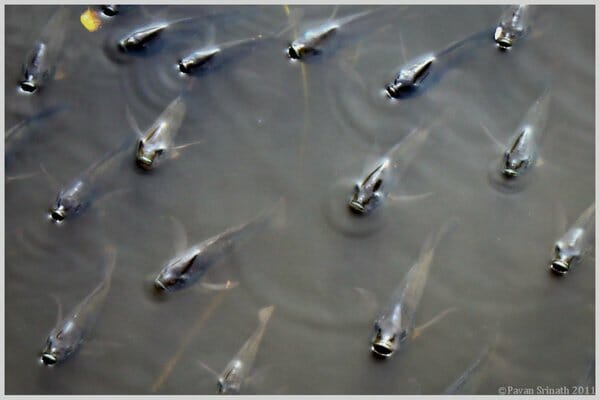 While the reason for this is unclear, it is apparent that the pond is suffering from excessive vegetation. Lotus, hydrangea and other aquatic plants have taken over far too much of the pond, leaving precious little breathing space for the fish. This is also in stark contrast to the much healthier lake on the other side of the bridge that that separates the two, where cormorants were seen diving and fishing. None of the birds were interested in coming near the huge numbers of fish just waiting to be taken, on this side.

The fish hovering on the surface also appeared to have little or no interest in food that was being offered to them. When a middle-aged man encouraged his daughters to throw handfuls of puffed rice down at the fish, only a few sluggishly moved towards the food. The rest ignored the food, doing little except gasping for air.

It isn’t hard to piece together the causes of this malady. Bangalore has a serious problem due to the incomplete and improper segregation of sewage and storm water drain lines. While the sewage is meant to reach sewage treatment plants, storm water is meant to drain into lakes and water bodies.

But with sewage getting mixed up the excess nutrients coming with it can promote excessive vegetative growth and decay, disrupting the natural balances in the ecosystem. This can lead to a severe depletion in the levels of dissolved oxygen in the water, resulting in the slow asphyxiation of its aquatic inhabitants. The dissolved oxygen available fails miserably in keeping up with the biological oxygen demand.

Thousands of fish have died in other lakes in the past, either due to contamination with toxic substances or due low levels of dissolved oxygen. In January 2005, five tonnes of fish were found dead in Ulsoor lake and in October 2008, at least 25,000 fish were found dead in Siddapura lake, just to cite two examples. As recent as a month ago, a pond in Ramamurthy Nagar got contaminated, with around 40,000 thousand fish were feared dead.

Though the city administration has take action under public pressure, rarely has it been sufficient. 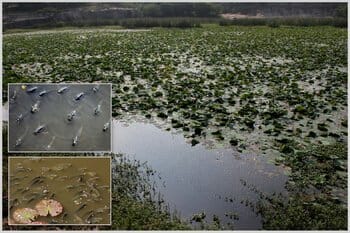 Around December 2010, there was significant public outcry about the same lake – whose maintenance was at its nadir, with severe stench being reported by walkers. The then Director of Horticulture, H M Krishnappa, had admitted then that they were unable to block sewage from entering the lake. This, despite Lalbagh having a sewage treatment plant within their premises.

It is a testament to development efforts that the main Lalbagh lake is significantly healthier today compared to last year.

It would be deeply regrettable if we allow another mass-death of fish in Bangalore, especially in Lalbagh – the heart of conservation in the city.

What can we do about it?

Concerned individuals can make a huge difference here. While long-term solutions to the health and vibrancy of Bangalore’s lakes can be elusive, short term fixes for the lotus pond within Lalbagh is far less so. With the Lalbagh lake right next to it, a large body of with sufficient clean water right now, it may just be possible to deliver a dose of fresh water into the pond, buying more time for the fish therein. This has to be followed by at least a partial clean up of the vegetation growth. These two actions, along with some relief from the North East monsoon rains should hopefully be enough to sustain a healthy pond till next year, by which time a more permanent solution could be looked into.

Concerned citizens can write to the public officials in-charge of Lalbagh and its surroundings. This includes the Directorate of Horticulture, the BWSSB and the BBMP.

Apart from this, regular visitors and morning walkers can keep a watch on the status of the fish. One can also advice people to stop feeding the fish, which would only make things worse.

With the advent of Web 2.0, crowd sourcing of information can be a powerful method of promoting collective action and citizen science. Given the general interest in Lalbagh and the frequency with which it is visited, it should be possible to gather news about new developments in every corner of the botanical garden, both good and bad. This can enable timely action and public accountability.

Right now, the problem is far more than just academic. If something can be accomplished over the next few days, there is still a chance that Lalbagh’s fish may survive.⊕

Which party won the exit polls of BBMP election 2015? Here is the compilation of all exit polls.

Despite being cash strapped, BBMP is extending its enthusiasm for new construction projects to ‘beautifying’ lakes.