Shikshana, a non-profit organisation based out of Bangalore, is working towards improving the quality of education in government primary schools by participatory intervention. The representatives talk to the school administration, teachers and students about their opinion on how to make the learning effective. 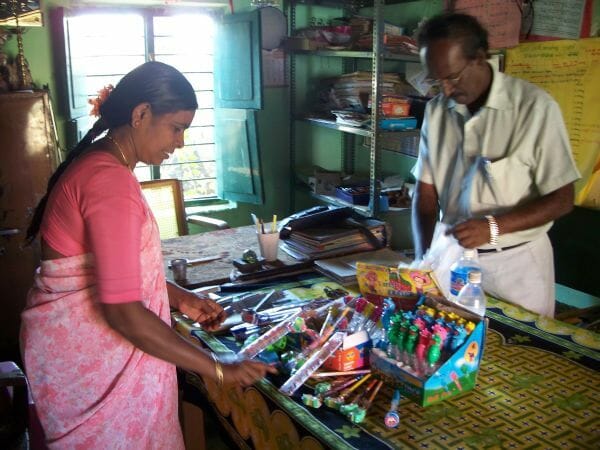 In some schools students are encouraged to perform through incentives. File pic: Padmalatha Ravi

This approach is completely alien in a setting where schemes are made at the power centers and the benefits trickle down. ‘I’ve been working for twenty two years, and this is the first time someone has come asking for what I think’, remarks one of the primary school teachers, with teary eyes. The solutions are mostly very simple, and easily implementable. The capital requirements are not high, nor are the resources. The group then works on the inputs thus received and try to resolve them. In most of the cases, the solution is extremely simple.

The group then works on the inputs thus received and try to resolve them. In most of the cases, the solution is extremely simple. For instance, in one of the schools, the handwriting of students was pathetic. One Shikshana representative narrates the story – ‘we asked the students why they didn’t practice. It so turned out that they did not have paper to practice. So we gave them blank sheets; and once they filled and turned them in, we gave a fresh set’. A small effort like this resulted in improvement of handwriting of those students within a year.

After the required interventions, Shikshana monitors the progress of the schools for a period of three to five years, after which it moves on to another projects. This leaves the school sufficient time to cope up with their issues and become self-sufficient. Shikshana measures the impact by an established pre and post analysis of the impact of learning on students. Shikshana then extends this – to hundreds of schools covering thousands of students.

With an annual expenditure of Rs. 400 per student, Shikshana have managed to cover 5000 schools. On a standard test conducted by ASAR, an organisation which does independent audit to gauge the effect of impact of education, there is almost 100% improvement in scores in the schools adopted by Shikshana.

R S Ramamurthy is the founder figure of Shikshana foundation. After a successful career as the CEO of BHEL Karnataka, and being advisors to two Prime Ministers on renewable energy, Ramamurthy decided to call it quits and enter the field of education. In an interview, Mr. Ramamurthy talks on the transformation and more. Edited excerpts:

On the transformation from a public servant to a social entrepreneur?

Yes, it seems to be sudden, but I had been nurturing the idea for long. I had been to remote locations as part of my job – to UP, areas bordering Nepal, Kashmir etc. I realised the negligence of the large section of society. The deprivation of people of education- one of the most important tools for development. So I decided to focus on it, to help create a world of equal opportunity for all.

So how did it start?

First of all, I read a lot. Met people. And to my surprise I found that all the reasons surrounding the poor standard of education – inadequate infrastructure, sub standard teachers etc. are all myths. I started out experimenting with three schools. But I was very clear that in the end, it should not be these three schools that benefit. I was working towards evolving a sustainable and replicable model. That time, I had the target of 1000 schools in mind.

Beginning to change something is difficult, especially in a conventional setup. Challenges?

Initially there were many. The teachers and principal’s in schools were surprised someone is coming to ask their priorities. Then, when we stuck around, they took to the idea and responded quickly. It wasn’t that difficult to deal with the government as well.

How does the model work?

We decided to ‘let the schools themselves decide what will make them better’. In a way, it is decentralising the decision making.

About the funds, how do you manage them? What are the future plans?

We’ve shown the schools that money is not easy to come by. Hence they’ve prioritised their requirements. They do the planning, and have a sense of responsibility about the money they spend. We’ve managed by about 2000 to 3000 rupees per school in a month. We’ve focused at insignificant but important issues. Currently, we are managing the funds from various donating agencies. But my main aim is to get it from the largest reservoir of them all – the Indian government. They have all the resources required, just the lack of direction, which we hope to provide.

About Ruchi Choudhary 2 Articles
The author has not yet added any personal or biographical info to her or his author profile.

A student writes to BBMP: ‘Killing me softly with your smoke’

Tired of having to constantly breathe in toxic fumes from the garbage dump fires in his neighbourhood, a school student takes up his pen to write to the authorities.

Alongside all the social impact projects that Nihar loves doing, he is a typical teenager who loves playing basketball and hanging out with friends.

Be the change for a Beautiful Bengaluru

The Beautiful Bengaluru – Be the Change campaign looks to make the city clean, green and safe. The campaign kicks off with a zero-litter drive at Lalbagh from January 15th to 17th.