The world is a small one, in today’s age of jet travel, but not many of us can claim to have visited the Poles. Of the two polar regions, Antarctica (the south Pole) still remains largely inaccessible to the whole of mankind. So when the first woman from Bangalore, Priya Venkatesh, visited Antarctica, her trip made for an interesting conversation.

Priya, 36, lives in Jayanagar and works for a training company. She is a keen amateur naturalist, and an excellent photographer. 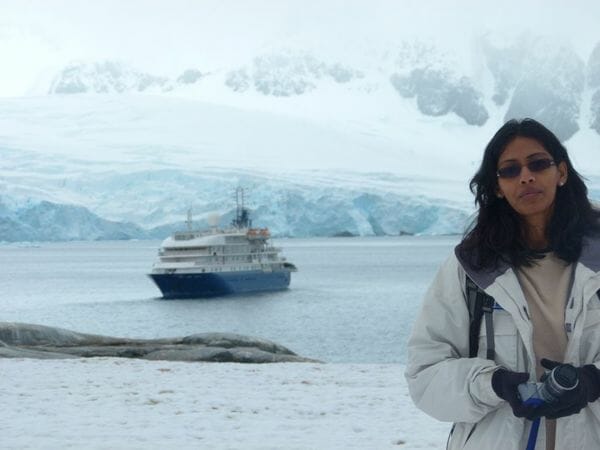 “In school, I used to see the little strip of white at the bottom of the world map,” she says, recollecting her earliest memories of this continent.  And, about  eight years ago, she went to Chitra Kala Parishath (CKP), where there was an exhibition of photographs from Antarctica. “Like many other people must have done, after being enthused by the beautiful photographs,  I thought to myself that I’d like to go there.” However, with the daily pressures of job (she works for Ozone, a training company) , home and other interests, she gave no further thought to the antipodes, north or south, for many years.

In January of 2011, however, her sister, Vidya, changed all that with a telephone call. Vidya told her about the trip to Antarctica, which was being organised by 2041. It is an organisation that is trying to spread awareness of the drastic implications of  climate change and of opening up Antarctica to trade and commerce, scheduled to happen in 2041 AD

Priya got in touch with 2041, and had several conversations with Sir Robert Swan, the founder of 2041 and was finally accepted as one of the group going to Antarctica.

It costs 30 thousand USD for the trip

“The journey itself costs around USD 20,000,” says Priya, and personal expenses including travel up to Ushuaia, Argentina, from where the journey begins would run to another 10,000 dollars. “Thank goodness I didn’t think of it as Rs. 15 lakh!” laughs Priya. There were, she admits, some people who told her that it was impossible to raise the amount in six weeks. But friends, like Ravi Chari, called her every day to check on the progress, and kept her motivated. Ravi’s wife, Viji, called one morning to say that they had collected a fair amount of money! “I was in tears,” recollects Priya. “If these friends from Bangalore had already raised that much, I owed it to them to raise the rest.”

Priya sent out mailers and requests to corporates, friends, and those who had done some work in the field of climate change as part of Corporate Social Responsibility. Organisations such as Fasttrack, EMC2, Piramal Glass, Dell, Travel Corporation of India, Kirloskar Institute of Advertising and Managment (KIAMS) and Godrej responded, some even more generously than others. Some private individuals also chipped in.

Priya and 64 others, boarded the ship on the 6th of March. There were briefings and acclimitsation treks before that. Sir Robert Swan, who was part of the group explained that they used the big ship, Sea Spirit to save on the carbon footprint of smaller groups, while showing the people what this wonderful, untouched continent is like. 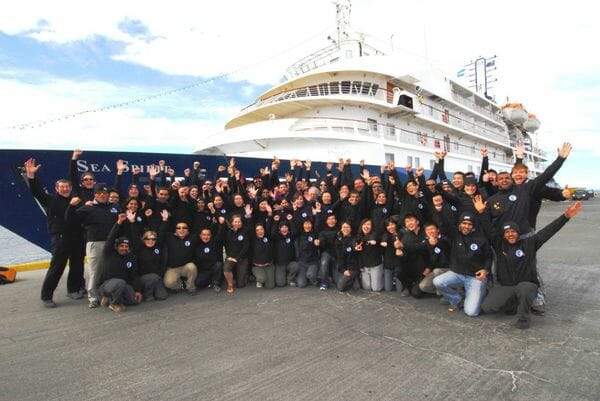 64 people who went on the expedition. Pic courtesy: Priya Venkatesh

The 65 people were from the age group from 17 to 64 years. “They were from 19 countries. The medium of communication was always English, but I learnt how to talk slowly, so that communication could be improved” says Priya.

The group was formed into teams, and everyone was given an exposure to leadership on the edge. “We learnt a lot of teamwork on this trip, apart from leadership” says Priya.

The ship was extremely comfortable in terms of accommodation, and the food was continental cuisine. There was plenty for everyone, and it must have been a huge exercise in logistics, remarks Priya, to have carried everything required on board from Ushuaia.

Sighting the penguins, watching the ice floes and the stark landscapes,was just awesome, reminisces Priya. She adds excitedly “we took the polar plunge, 64 out of the 65 people did it! I I knew it was going to be cold in the waters of the Antarctic, but beyond that I didn’t imagine too much, and I managed to do it quickly and easily.”

Lessons from the journey

“I am committed to spreading the awareness of  what 2041  will mean, in my city and elsewhere,” says Priya soberly. “The impact of climate change can be converted, if each of us passes on the message. Sir Robert told us that the peope who will take the decisions in 2041, when Antarctica will be opened up to commercial trade, are at school now, and so, it is to the schoolchildren of Bangalore that I want to address my message.”

The message that Priya wants to propogate is that the treaty of 2041 will not change, unless human beings make it commercially unviable, or unattractive, to go to the South Pole. To avoid mining energy from unexplored regions, we should develop alternate sources of energy. The key is sustainability. This  has also  been explained in the “Coolest Curriculum”, which is on the 2041 website.

Priya has already given some presentations in Bangalore, and is willing to school children and adults about it. “Going to the south Pole, as the first woman from Bangalore, was awesome,” she concludes, “but the trip showed us all that we are fellow-beings on one planet, and our message of conservation should be aimed at the whole world.”⊕

In the second and last part, some tips to avoid messes – after the maintenance is taken over by the RWAs.