For Suthinthran Rao, 39, an entrepreneur, it was a rare chance to play one of his favourite childhood games cricket, after several years. "As children, we played cricket even in mid-May in Chennai. Now, Bangalore city has very less open space left for children to play. I brought my seven year old son to see what he is missing out on." said Rao while he took a break from batting for his team, Himagiri Meadows. 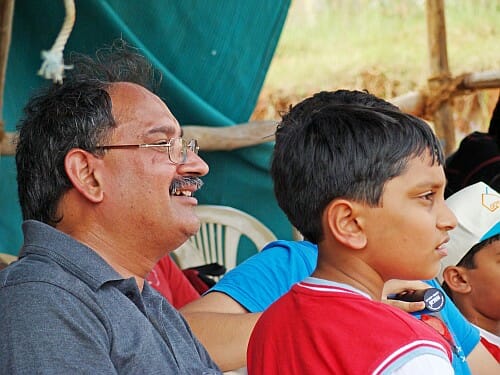 Rao was playing at the ApnaComplex Treamis Premier League, a 15-over, tennis ball cricket tournament being played at TreamisWorldSchool grounds in ElectronicCity on Sunday, 18th September. It is an inter-apartment corporate event in Bangalore. Players need to form a team representing the apartment or organizations. Thirteen teams are taking part in the tournament which began on 10th September and will go till 2nd October. The matches are held on weekends.

The tournament became an opportunity for several people, most of them in their thirties or early forties, to rediscover sports. Umakant Soni, 32, another entrepreneur living in Concorde Silicon Valley (CSV), Electronic City, feels no matter how hectic one’s schedule is they have to take time out for physical activities like sports, to maintain a balanced life. "The tournament has been an amazing experience. I will play more regularly from now on." he said. Soni, captain of CSV Warriors led his team to victory against Concorde Mid Way City by scoring 57 runs and taking three wickets. "I wish my four year old daughter was here to see her daddy play." he says.

Manish Gupta, 40, a player for Springfield apartments Field Fighters, said that although they are not in their physical prime, it was not too to difficult playing the matches. "Most of us have played some sport or the other so we are not all that bad. We are rediscovering our talents in this tournament." he says humorously.

The league matches conclude on 24th September and quarterfinals will begin on the same day.

Understanding how to segregate waste

Clarifying all you wanted to know about waste segregation – the what, why, where and how to do it! From food waste to recyclables, e-waste to biomedical waste.

Making of a garbage free zone

Sparrows are often considered as pests and have been systematically wiped out. But these perky birds have been around human beings for too long to be forgotten. People are making serious efforts to bring them back.