The Bruhat Bengaluru Mahnagara Palike (BBMP) may have passed some major decisions in the last few years – including increase in taxes, and road widening and infrastructure projects worth hundreds of crores of rupees. But none of these decisions were ever passed by a vote in the city council. And this, in a city of over eight million people with massive problems ranging from inadequate affordable housing to dying lakes and property tax holes to roadwidening resentment.

The Karnataka Municipal Corporation Rules (Rule 65 in Conduct of Business Rules), says a vote should be held if councillors press for it. But at least in the current council and in the previous one (2001-2006), no such vote was done, says Additional Council Secretary Mario Pires. 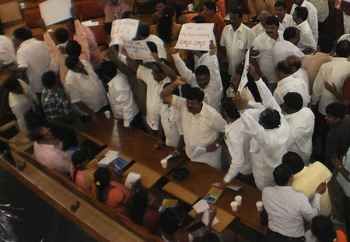 Earlier this month, the Bangalore city council passed an inflated budget of over Rs.9000 crores, with large gaps in estimates of receipts, amidst chaos. File pic: Navya P K.

The most recent demand for vote was made by Padmanabha Reddy, JD(S) leader in the Council, during a session about 1-2 months back, on site allotments for Economically Weaker Sections or EWS. Mayor Sharadamma Ramanjaneya (BJP) did not put the issue to vote as JD(S) was the only party demanding it. JD(S) is a minority party in the city council.

Even if opposition parties disagree on any proposal, the usual outcome is slogan shouting and walk outs. Councillors rarely ask for any issue to be put to vote. Consequently citizens have no way of knowing what stand their elected councillor took in any issue, or how much support there was for a particular decision.

BJP MLA (Jayanagar) B N Vijayakumar says that voting is not necessary at all. "What is the need for vote if BJP has a clear majority? The level of discussions in the Council at present is good; for example, this year’s budget discussion lasted four days. But councillors can ask for vote if they want", says Vijakumar. Though never elected as a councillor, Vijayakumar has attended many major Council sessions. Vijaykumar is a first-time MLA.

But M R Hegde, former Secretary at state government’s Department of Parliamentary Affairs and Legislation and current Advisor to the Governor, says, "Council is not functioning democratically if councillors forego their voting rights. Even in the state assembly, opposition demands voting though they may not have the majority. At least public would know that representatives are standing up for their interests."

The city council has not always been this way. Many major decisions used to be made by vote earlier, says M Sridhar, in his eighties now, who had retired as Council Secretary in 1990. "When I was in the Council Secretariat from 1976-1990, voting was done on some budget sessions and some major resolutions. Politicians like Suresh Kumar and Ramachandra Gowda were active in the Council and used to demand votes," he says. Suresh Kumar (BJP MLA) is currently Miniser of Urban Development in the state cabinet.

What the rules say

As per KMC Rules, there should be discussion on any proposal and then the Mayor would ask if the resolution should be passed. If councillors then demand a vote, Mayor should hold it. First there should be a voice vote wherein Mayor will ask councillors to collectively say ‘Aye’ and ‘No’ if they are supporting and opposing the motion respectively. 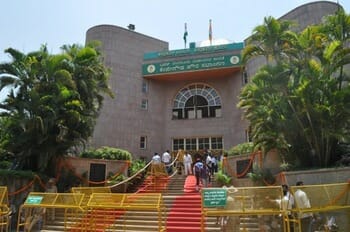 If the Mayor’s decision as to which group had majority is disputed, the division bell would be rung and voice vote held again. If the outcome of the second vote is also disputed, those supporting and opposing the motion would be respectively asked to stand and a count would be taken, to decide on the majority. However, the rules also say that the vote of individual councillors will not be recorded.

According to current interpretation of rules, Mayor has the right to decide whether a vote should be held, even if there is demand. The Act itself does not specify any criteria by which Mayor should accept a demand for vote. "There should be a strong demand from many councillors, for vote to happen. Ninety per cent of councillors are first-timers, and majority of them are unaware of the provisions of the Act," says Pires.

Currently in council sessions, only a few experienced councillors argue on decisions. If they disapprove of the proposal they urge all their party members to stand up to show disagreement. Even as this happens, Mayor would say that the proposal is approved, which puts an end to the matter.

Surprisingly, opposition party – Congress and JD(S) – councillors are also not concerned about not having a voting process. They say that votes would not matter as BJP has a clear majority and all councillors toe party line.

JD(S) first-time councillor T Thimme Gowda (Srinagar, ward 156) says, "There is no voting since the ruling party has majority. More than voting, discussions should be prioritised. Some 20 proposals are passed in the monthly Council sessions and it takes only 2-3 minutes to pass each proposal."

Former Mayor P R Ramesh (Congress) says that ‘voting’ has always been informal. "Since BJP has majority in the Council, voting may not be needed." Ramesh says that BBMP’s lack of autonomy gives hardly any power to councillors in the decision making process. Ramesh had fought a PIL in the Karnataka High Court from 2006 to force the state government to hold city council elections. Elections were finally held in 2010, after four years.

"Most councillors do not know what document they are looking at, during sessions. Many are concerned only about their own wards. But policy decisions on the city should happen in the Council itself," Ramesh says.

N S Mukunda, convener of the civic organisation Citizens Action Forum, says that councillors do not have a nuanced understanding of the voting process. "Voting process is meant to make your voice heard and to record your opposition on a decision."

He says that lack of funds have made BBMP depend on the state government. "BBMP’s tax collection covers its administrative expenses only. So all councillors, irrespective of their party, have come to look up to the state government and not challenge its decisions. The only solution is for citizens to push their ward councillors on major decisions."

Partha Roy, 42, a senior director at a city-based financial products firm and resident of Kadugodi area near Whitefield, says that not just voting, but the entire functioning of the council is not transparent. "Public does not know which proposals are going to council and how they are passed." All proposals should be put in public domain – either through websites or social media – a few days before they go to the council, demands Roy. "Then public will be able to influence their councillor in making a decision. Voicing the public’s interests is the job of the councillor," he says. ⊕

Oota from your Thota in JP Nagar

Know all about organic kitchen gardening, composting and healthy eating this Sunday at JP Nagar. The event will have discussions, along with exhibition and sale of gardening materials.

Rainfall in Bangalore over the last century: Has it really changed?

Wouldn’t it be good to understand the rainfall pattern for the year in advance, so that you can plan the water requirements and sources in advance? Historically Bangalore has received good and bad rains in alternative years.

The city now boasts of India’s first fully sponsored professional cycling team. Here’s a sneak peek into who they are and what they are planning.