Various apartment blocks that have sprung up in Jayanagar 1st block threaten to destroy the quality of life in the area. Residents in the area have pointed out that they have come up in violation of all building norms and ask the pertinent question whether this was in connivance with the authorities. 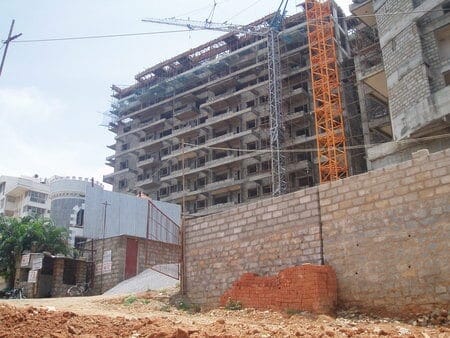 The most blatant example of this is the case of the 14-floor apartment building coming up on 1st cross, 1st block near Madhavan Park. Being built by Bysani Developers it is located at a dead end. The approach road is a mere six-and-a-half metres. The norms (NBC Fire Protection) state that for a high rise building "the width of the main street on which the building abuts shall not be less than 12 metres and one end of this street shall join another street not less than 12 metres in width." This is because in case of a fire mishap the road will be wide enough for a fire engine to pass through. Bysani Developers, in order to get their plan sanctioned, encroached upon public space to show the required 12-metre width. The bund adjoining the road has water and sewerage lines passing underneath it. Bysani Developers went so far as to construct a wall enclosing the bund.

The BBMP ordered a ward engineer’s enquiry after citizens complained and Joint Commissioner (Works) prepared a report that declared the wall as an encroachment. Then BBMP Commissioner K. Jairaj ordered dismantling of the wall on December 29, 2006. However, the wall has been demolished since. Bysani Developers has not offered any comment so far.

Residents are enraged that the apartment building keeps rising in spite of many representations to the authorities. An RTI hearing was scheduled for June 20, on the basis of an RTI application submitted by a concerned citizen C N Kumar, but it was postponed. Residents question how the small area can accommodate some 200 more families and that many more cars and two-wheelers. Close-by is an existing Mantri apartment complex too. The approach road to these two apartment complexes is narrow and up a slope.

Building violations have become the order of the day in Jayanagar 1st block, adversely affecting a once peaceful residential locality. The apartment ‘Raja Prakruthi’ lies at the dead end of 4th cross on land that was once earmarked for a connecting road to provide access to NIMHANS from Jayanagar. The land was, in fact, part of the series of plant nurseries that once dotted the area and are eyed by real estate sharks today. Other apartment complexes have come up in violation of building norms, and a number of residents have also constructed or modified their houses violating building norms.

Residents are hoping that the Bruhat Bengaluru Mahanagara Palike (BBMP) will take action against all violators sooner than later. "Don’t we have the right to live here in the way we have been used to all these years?’ asks B L G Rao, an area resident and a coordinator of First Block Organisation of Residents for a Clean Environment (FORCE). FORCE frequently takes up area issues with the BBMP.

Last week, traffic police notified the bus priority lane on ORR. Meanwhile, eight transit hubs are being planned around Bengaluru to reduce traffic congestion. Read more on news from the city over the past week, in our roundup