The Joy of Giving Week is a national movement that hopes to engage every Indian in "acts of giving" – money, time, skills, resources or love. To be celebrated every year for a week including Oct 2, the week aspires to become a "festival" of giving that unifies India across its classes, castes, socio-economic strata and the urban/rural divide. 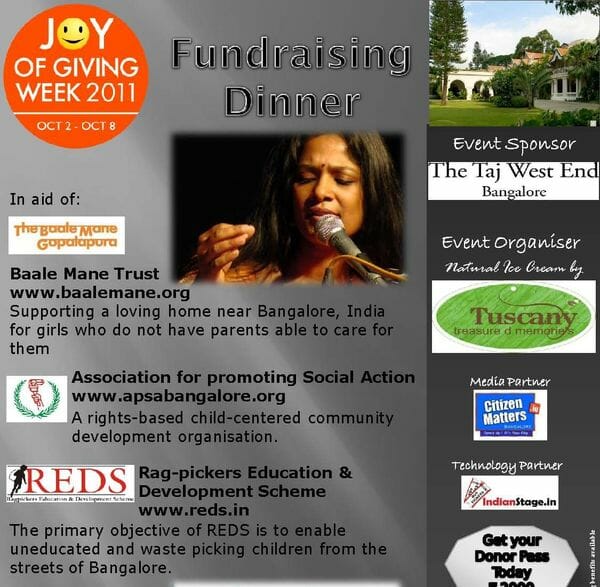 As part of one of the programmes conceived for this year, there will be fund raising dinner with a musical concert by singer M D Pallavi at the Taj Westend hotel.

Three NGOS will receive the proceeds of the concert with dinner. ‘Baale Mane’, Association for promoting Social Action (APSA) and Rag-pickers Education and Development Scheme (REDS) are the NGOs identified.

Baale Mane (Girls’ Home) at Gopalapura, on the outskirts of Bangalore, is a home for around 65 girls between the ages of 5 and 18. Founded in 2001 by Paraspara Trust, an NGO dedicated to the eradication of the child labour system, it provides shelter and a loving home for girl children.

The girls are either orphans, have a single parent who is unable to care for them or have lost contact with their parents. Most of the girls have been rescued from domestic service, some have been found homeless in the streets by volunteers and others have been given shelter having been arrested by the police when living on the streets.

At Baale Mane, the girls are take care of with special emphasis on education, in addition to healthcare.

REDS works to enable uneducated and waste picking children from the streets of Bangalore and Ranchi. While APSA is a rights-based child-centered community development organisation.

The truth is that we admire a confident child when we see one and wish the same for our child. We may not get all ‘Pushy Parent’ about it, so how do we do this?

Why no objections to BESCOM’s proposed rate hike?

Only three people objected to BESCOM’s proposal for a price hike. Why is it that people put up with the arbitrary ways of BESCOM and not question it?