When the BBMP budget was passed on Saturday, September 3rd, 171 corporators had got additional grants for ward works. While the allocation was Rs 1-4 crore for most wards, the highest allocation was for Mayor Sharadamma’s ward Shettihalli (ward number 12). Mayor’s ward received Rs 15 cr.

The second highest allocation was Rs 8 cr, for Deputy Mayor S Harish’s ward Nagapura (67).
Rs 5 cr were allocated to Shanthinagar (117) and BTM layout (176), both of which are represented by Congress.

The additional ward grants have taken the budget outlay from the earlier Rs 9196 cr to Rs 9380 cr. This addition of Rs 184 cr was given even as opposition was arguing that the budget was unrealistic and that funds cannot be mobilised this year. 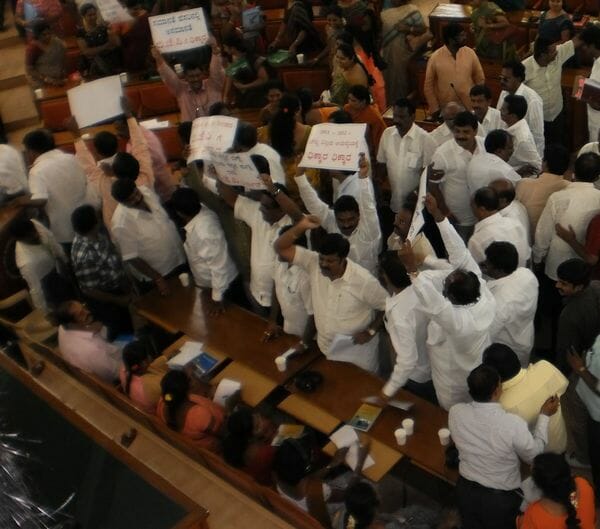 BJP has no clear answers on how Rs 184 cr will be mobilised. BJP leader B R Nanjundappa says that this amount will be channelised from MLA funds and by cutting down on unnecessary spending.

The budget was passed on Saturday even as the opposition was protesting. Congress and JD(S) corporators had raised several questions on the budget during the four-day discussion from August 23 – 26. On September 3rd, Taxation and Finance Committee Chairman Manjunath Raju and BBMP Commissioner H Siddaiah responded to these questions.

The response however was mainly a reiteration of the promises made in the budget. As opposition continued its protest, Mayor Sharadamma read out a speech saying that the budget was approved, putting an end to the discussion. As the budget was passed, opposition members protested, moving into the well of the House with placards and slogans.

The Council does not have a process of counting corporators’ votes for budget approval; the approval process is completed as soon as the Mayor declares so.⊕

The ubiquitous gas geysers can prove dangerous if kept in an unventilated place. Better safe than sorry – read on.

This Valentine’s Day, a festival to show your love towards Bengaluru

The Bengaluru Civic Fest will be held on the 14th of February. It will see civil society organisations and groups discuss their work, government agencies communicate their work with citizens and school children discuss their participation in local governance.

This week’s scan of Bangalore’s Kannada dailies includes reports on increasing prices of onion and government bungalow Anugruha falling from politicians’ grace due to Vastu Dosha.