The Vidyapeeta ITI layout in Kathriguppe relinquished four parks to BDA as per layout plan sanction regulations. But instead of handing over these parks to BBMP for maintenance, BDA granted two parks to private parties; none of the four sites are parks now. The layout residents have been fighting for proper use of these sites since 1995.

In HAL 2nd stage, BDA leased out a CA site of 21,900 sq ft to Indiranagar Social Welfare Trust in 1991. The lease was for 30 years on annual rent of Rs 2, on the condition that the Trust would build educational institutions or small scale industries in the site for the poor. But the site was used only for disposing garbage. A citizens’ association in the area petitioned BDA saying that it should give the land to BWSSB to build water supply infrastructure and a park. In 2007 the association alerted BDA about ongoing negotiations to build a commercial complex in the site. BDA took no action. At a conservative estimate the site would cost about Rs 10 cr now. 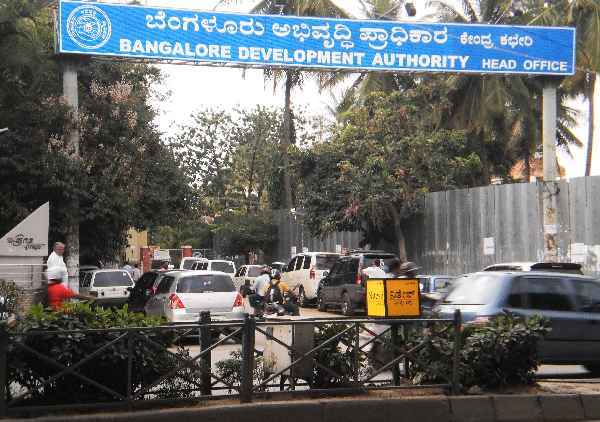 The Bangalore Development Authority or BDA is headquartered at Kumara Park, off of Sankey Road. Pic: Navya P K.

All of these cases and more detailed in a report authored by V Balasubramanian, former Additional Chief Secretary and Chairman of the Government of Karnataka’s Task Force for Recovery and Protection of Public Lands.  Inaction against land grabbers, lack of data, not protecting public lands – these are some of the findings against the BDA in the report.  (See Citizen Matters’ exclusive interview with Balasubramanian here).

The BDA itself has misused park sites meant for public use, the task force has found. In layouts formed or approved by BDA, 25% of land should be handed over to BDA for open spaces (parks, playgrounds) and Civic Amenity (CA) sites. CA sites are meant for public utilities like hospitals, fire stations, educational institutions etc.

V Balasubramanian, IAS (Retd.) former Additional Chief Secretary of the Government of Karnataka and Chairman of the Task Force.

REPORT OF THE TASK FORCE FOR RECOVERY OF PUBLIC LAND AND ITS PROTECTION
(PDF, 320KB, 87 pages)

Ideally builder should fence and hand over CA and open spaces to BDA by registered deed. But BDA does not insist on this, and many private (BDA approved layouts) have not handed over their sites. This is despite a HC order which says that all CA sites, whether handed over or not, belong to BDA.

Encroachments in Bengaluru worth at least Rs 12,375 cr

The report also exposes some glaring cases of land encroachment. It cites the case of a 7 acre 10 gunta land in Byatarayanapura where the now-defunct Mysore Machinery Manufacturers Ltd used to function. The company applied for layout approval in 2003, but withdrew its application as it did not pay BDA’s approval fee of Rs 13.3 lakh.

The company was supposed to seek fresh approval in case of future development. But development continued without any approvals from BDA. Though BDA sent them a notice in 2007, it did not pursue the case further. All this, while BDA has the power to demolish encroachments and recover the demolition cost from violators. According to a 2004 HC judgement, BDA can also take possession of such buildings and use it anyway it wants to. 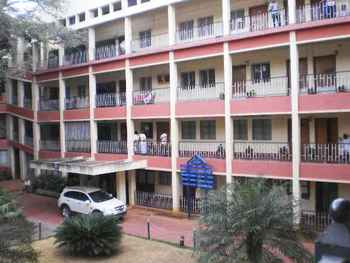 BDA can also initiate prosecution of encroachers; the punishment for encroachment is jail term up to three years with fine. But the report says that BDA has not used this provision. The report estimates that around 2,878 acres of BDA land has been encroached so far. At the conservative cost of Rs 1,000 per sq ft, this land would be worth Rs 12,375 crore.

In fact BDA does not have an exact record of its total land, encroachments and open spaces. It does not have an updated property register. The report compares BDA with the Hyderabad Urban Development Authority (HUDA), which has an Estate Officer’s section that holds inspections and submits weekly reports on land. This helps encroachment removal, making encroachments rare in HUDA jurisidiction.

On the report’s allegation that BDA does not have data on its own properties, BDA Commissioner Bharat Lal Meena says that there is data already and it only has to be updated. "We will take action on all these reports," Meena said generically, when asked about the recommendations in the report. He did not specify what action would be taken and refused to comment further.

Much of the flak in Balasubramanian’s report goes to BDA’s Legal Wing, which it says, has been both ineffective and corrupt. Headed by a retired senior judicial officer, legal wing has given wrong advice to BDA.

In a case relating to encroachment by a former owner in HBR layout, the BDA counsel himself informed the court that BDA had no issue with this. When the Joint Legislative Committee (JLC, which was formed by state legislature in 2006 to study encroachments) pointed this out to BDA, the latter only discontinued the lawyer’s services instead of reporting him to the Bar Council.

There are many encroachment cases wherein higher courts have ruled in BDA’s favour, but cases are still pending in civil courts. Legal wing takes no action to get these cases dismissed, says the report.

Problems in acquisition and de-notification

BDA does not hold proper inspections during land acquisition, causing existing buildings to be notified under acquired land. This leads to many cases in the courts. Though existing buildings are usually only in 10-20% area of the acquired land, court stays prevent BDA from distributing any sites. Currently 1,275 acres of BDA land is affected by such cases.

Another issue is BDA de-notifying land after taking possession of it. This is illegal, according to Land Acquisition Act, 1894.

The report cites the case of land acquired for BHEL House Building Co-operative Society in Laggere village. BDA took possession of the land in 1984. An individual applied to government to allot her some land, saying that she was living in a shed there. While government de-notified some land for her in 2002, BDA allotted her an additional stretch of land – far more than the area she had requested for. Both these lands were originally marked for two CA sites. A five-storey apartment came up in this land later.

The task force report accuses BDA of obliging vested interests rather than any genuine reason for de-notification.

They have possession certificates, yet live in fear of eviction

In part two of a series on Bengaluru’s urban poor, Citizen Matters speaks to slum-dwellers of Krishnarajapuram’s Rajiv Gandhi Nagar. Caught in a legal tangle, these residents are on the brink of losing their homes.