The students of MES College of Arts, Commerce and Science, Malleshwaram, led a very spirited march called the ‘ECO-Ganesha awareness campaign’ on Sunday August 28th around the Malleshwaram to raise awareness about the pollution problems associated with immersion of painted Ganeshas made from plaster of paris.

Marching for a cause. Pic: Suja Sukumaran

They set out into the streets with banners, posters, pamphlets and a street play bound to entertain and educate the public regarding the merits of using clay Ganesha idols instead of painted ones.

Every year hundreds of Ganeshas are immersed in the lakes all over Bangalore. Along with the deity the paint and all the paraphernalia are dumped into the water. The harmful chemicals in the paint such as lead, chromium, mercury and iron have resulted in the death of fish in several lakes. Several artisans have switched to making Ganesha’s from the soil but a large number are still using toxic paints and plaster of Paris.

United they stand against pollution of lakes. Pic: Suja Sukumaran

Apoorva G.R, one of the students remarked "We are all polluting water with Ganeshas. We want to spread awareness regarding this."

"Colourful caricatures of Ganesha were never in our history. Only clay models of Ganesh and the right image should be used," said Smruti Harits and Brinda. P echoing similar sentiments.

B G Srinivas who is a volunteer with Youth For Seva was interested in spreading the information and educating public "We talked to several Gurus in the religious field and they all suggested that using clay Ganesha instead of painted Ganesha is appropriate. For the last three years we have been campaigning for eco-friendly Ganesha festival. We need to work with KSPCB also to make this a success. We have all the information at parisaraganapathi.net." 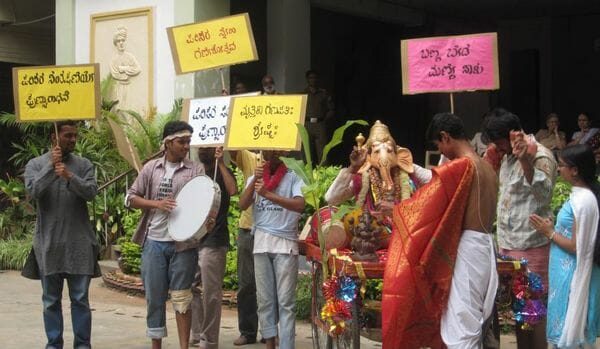 Akshay Yadav who co-ordinates the environment group for Youth For Seva has a group called Green Commando. They are involved in spreading awareness about the disadvantages of using plaster of Paris among citizens in addition to other environmental activities.

BDA has made special arrangements for Ganesha immersions. They have made immersion tanks (kalyanis) in Malathahalli tank, Kothnur tank, Konasandra tank, Thalaghattapura, Ullalu, and Kommaghatta tank, Racherahalli lake and Jakkur sampigehalli lake. Residents are requested to immerse Ganeshas from September 1-9 in the kalyanis, between 10 am – 8 pm. Separate staff appointed there will help people with the immersion process. People are requested to remove garlands and other ornamental decorations from the idols before immersing them.

For more info you can contact: Youth For Seva: parisaraganapati.net⊕

‘I chose entrepreneurship over education’

He dropped out of college because he believed he was better off being an entrepreneur. His venture is the platform where both buyers and vendors get a good deal, while he makes his moolah.

Beyond the Land of Hattamala

A new theatre group’s debut production, Badal Sircar’s Beyond the Land of Hattamala.

This is a story about one young city lad who recovered from a near fatal accident. Helped by courage, strength, support from his family and friends, and a rare show of determination and fighting spirit.