With rising petrol prices, electric bikes are fast becoming popular in the city. Those below 18 years are opting for low speed bikes, which have maximum speed of 25 km/hr. These bikes are not categorised as motor vehicles and hence do not need a driver’s license, registration or insurance. Like any retail product, they can be purchased and used directly.

Not yet 18 but can ride a bike

Jayanagar-based Kushal Pabbi, 16, owns iStar, a 25 km/hr electric bike. A Ist PUC student in St Joseph’s PU College in Richmond Road, he uses the bike mainly to travel to college and back home. "I can get driving license on turning 18 only, hence I opted for an e-bike. It takes me more than an hour to go to college by bus, so the bike is convenient. It does not need fuel and is priced lower than regular bikes," Pabbi says. iStar is manufactured by a Bangalore-based company, iBIKE.

He says that e-bikes are becoming more common in campus. "There are 20-25 e-bikes of different brands in my campus now. Mostly people come to know about them by word-of-mouth."

Low speed e-bikes suit those who want to travel short distances. They are available at the price of Rs 27,000 onwards.

Sandeep Dama, Co-founder and Managing Director of IBIKE, says, "Teenagers form about 10-15% of buyers, most of them are girls. People staying in apartment complexes or layouts buy e-bikes to travel within the complex. Businesses that have door delivery services are also buying, but they prefer e-bikes with higher power as speed matters for them." iBIKE’s first model iStar started selling in Bangalore last October; it has sold over 200 bikes so far.

Though speed is low, it is not a major concern for buyers. "It is a little difficult to accelerate the bike while taking off from traffic signals, but otherwise this speed is good for city conditions," says iStar user Chetana Vijaykumar Jyothi, 21, a BE student in Yellamma Dasappa Institute of Technology in Kanakpura road.

Though these bikes do not require registration, they are first approved and certified by ARAI (Automotive Research Association of India), Pune, before they enter the market. ARAI is jointly set up by the automotive industry and central government.

Rising petrol prices have boosted sales for many companies. Dileep Kumar T K, Operations Manager at Future Techno Designs, a dealer for Ampere electric bikes in the city, says that sales in his Koramangala outlet has been highest in the last three months, after the petrol price hike. "In the last two years we had sold 500 units. Of these, more than 100 were sold only in the last three months," he says. Coimbatore-based Ampere bikes sell low speed, high speed and disabled-friendly models in Bangalore.

Unlike low speed e-bikes, the high speed ones need license and registration. They are not very popular among youth as many would prefer faster bikes once they get driving license.

"For high power e-bikes, maximum speed would be 50-55 km, which does not excite youth much. People from all age groups buy them, but it is more popular among elderly and women in general," says Dileep Kumar.

It takes 6-8 hours to fully charge the bike’s battery, which would consume about one unit of electricity (a unit costs between Rs 3 and Rs 5).  A full charge would give mileage of 50-60 kms.

The only major cost for the buyer is for replacing the battery, which gets exhausted after 18,000 kms. 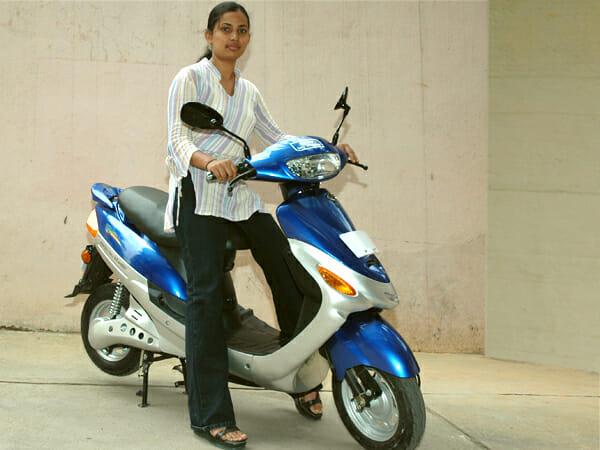 Prof Ganesh Prabhu, faculty at IIM-B, who owns two high speed e-bikes, says, "Battery may last about a year for active users, but for light users like me it lasts 2-3 years. Battery replacement cost Rs 12,000 for me, but overall cost would still be lesser than that of regular bikes." Prof Prabhu owns an Ekovehicle and a TVS Teen, which he use to navigate from home to IIM campus, and within the campus.

While regular bike users have to spend for petrol and maintenance every three months, e-bike users save on this. Service is not required as often as in regular bikes and can be completed fast. Prof Prabhu says that he got his Ekovehicle serviced only 2-3 times when it got damaged. "I do routine maintenance myself. In case of breakdown, company employees provide service at my home itself," he says.

IIM-B now has three disabled-friendly electric bikes in their campus. "The bikes make no noise at all and disabled students can drive them up to their classrooms on the ground floor. Campus security persons also use them sometimes to move around," says Prof Prabhu.

A disadvantage of e-bikes is that its components are not easily available and it would be difficult to get it repaired in case of breakdowns. Usually spare parts are with the company, and common shops may not be able to repair them.

Big brands such as Hero, BSA and Avon have now entered the e-bike market. There are brands like Ekovehicles and YoBikes which has been around for couple of decades and then new ventures like Ampere and iBIKE.

But there is not much competition as the products are only beginning to get popular. "There may be about 10 players in the city altogether; this market has not grown much. In our case, we do not use much advertising, people get to know about the company by word of mouth," says Dileep Kumar.

In the 2000s, many small e-bike companies launched in the city, mostly importing components and assembling bikes locally. E-bikes have relatively less number of components and are easy to assemble. Many of these companies did not provide after-sale support to customers, and shut down soon when business did not flourish.

People who bought the bikes had a tough time maintaining them, leading to widespread complaints about the industry itself.

"Service is a major concern for buyers. There should be assurance that a company will stay for the long run," says Kumar. Currently many companies give warranty and service.

Dama says that the number of companies has come down, but the market itself would grow in the next few years. Many find cities to be a good market as traffic congestion and pollution is rising.⊕

Santhe for quirky and eclectic Bengalureans

The conformists of unique, distinctive styles of sartorial choices, art or home décor found their favourite things at the soul santhe. In its third edition, the soul santhe is catering to the quirky and off beat side of Benglauru