The High Court case on Sankey Road’s widening, which citizens had filed against BBMP and state government, will include BDA as a party. Five citizens and the residents’ association Malleswaram Swabhimana Initiative had jointly filed the PIL last month when BBMP cut 17 trees across Sankey road stretch.

HC ordered a stay on BBMP’s tree cutting at the time, when two of the 17 trees were still standing. Hundreds of trees are expected to be cut for road widening from Cauvery Circle to CNR Rao Circle, and subsequently till Yeshwanthpur flyover.

The High Court bench headed by Justice N Kumar passed the order to rope in BDA into the case, during a hearing on August 10. This was because the petitioners’ counsel questioned BDA’s RMP (Revised Master Plan) map, which is the basis for road widening projects.

Petitioners’ counsel K G Raghavan specified that citizens were not questioning the RMP itself, but only its execution. He highlighted sections of the Karnataka Town and Country Planning (KTCP) Act, which defines RMP. According to these, RMP should include a series of maps showing complete street pattern, showing all roads and their traffic circulation patterns. Improvement proposals should be specifically mentioned. After this, the draft plan has to go to government and then put in public domain, calling objections from citizens. The final plan will be published after this. 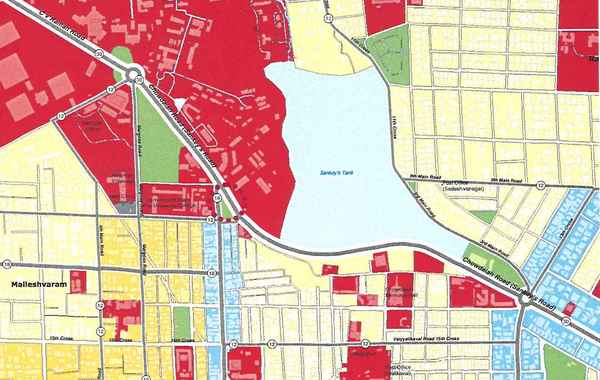 Clip of the Sankey Road section of a map from Revised Master Plan 2015. See 30m marked as an encircled (30).

The counsel presented copies of the RMP map for Malleswaram to the judges and asked if they could recognise Sankey road widening plan in the map. The road is to be widened from 12 m to 30 m. The RMP map shows a small circle with ‘30′ inscribed in it, along the road marking. The legend section on the map says that the circle symbol indicates ‘proposed width of road in meters’.

"The existing road width is not mentioned. Even proposed widening cannot be identified by laypeople using this map, if they have to put forth objections," Adv Raghavan said. The previous (1995-2005) CDP had clear markings to indicate widening – proposed width of roads were mentioned in text across the length of road, on maps.

Vijayan Menon, member of the citizen’s group Koramangala Initiative and the city-based Citizen’s Action Forum (CAF), agrees. CAF as one of the petitioners in the 2008 PIL that challenged the legal validity of RMP itself (link to https://bengaluru.citizenmatters.in/articles/view/270-cdp-charged). "A marking on the final plan without any further details to explain it, does not help. There was no clarity on the exact extent of widening and reasons for it. There were no consultations after the final RMP was published, which is contrary to practice all over the world." Menon also accuses BBMP of not being consistent in its own practices. "In some cases like in Hosur road, BBMP is not doing the full extent of widening as in the RMP. So projects are taken up as per BBMP’s convenience."

For it’s part, the court accepted counsel Raghavan’s argument and said that this issue should be clarified by BDA. The petitioners have already sent a notice to BDA. On August 19, BDA will appear before the court. Date of next hearing will be fixed on 19th.

Corporators and engineers say there are too many potholes, too little money and too little time. Did the Commissioner speak too soon?

Devarayanadurga in Tumkur district was once known as Anebiddasari. It is a well known pilgrim spot amid green hills and is guaranteed to revive your spirits with its beautiful rocky terrain.

Play equipments were not installed for years. Dustbins cost four times more than the market price. Koramangala’s parks have seen it all.