"Be pleased! Your area has been moved up into the commercial zone," said a builder to us. "What you paid for your house in the `80’s has now jumped to more than ten times the price."

Should you be pleased? If you plan to live in the same house, get ready to see a slow and steady decline into a nightmare – just like what happened to us.

Castle Street was a little quiet street in the ‘80’s with bungalows and small families that happily knew each another and enjoyed the peace and quiet of being in the heart of the city, yet slightly away from the maelstrom of Brigade Road. 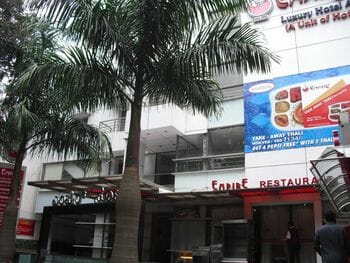 Hotel in place of a house that was meant for five people. Pic: Marianne De Nazareth

Suddenly, almost overnight, in place of a single bungalow where the Lovett family lived, the huge and overbearing Empire hotel has been erected. Shiny rotisseries with chicken being basted, juice stalls churning out endless glasses of fresh fruit, Biriyanis and parathas, to feed hungry Bangaloreans day and night – should make everyone happy right? Wrong! Not for those living in the vicinity.

The building which earlier housed five people now has hundreds of people, thronging its doors. So obviously parking has become a huge problem. That keeps the traffic police happy as they do not have to go far to load their tow trucks with ‘irregularly’ parked vehicles. Just drive up to Empire and collect the bikes which hapless customers have parked on the road. Why was Empire not forced to make basement parking, was the problem not envisaged from the start?

A few months down the road an eye hospital opens its doors- The Narayana Netralaya between two family residences. It had been a bungalow where the David family of the Glenand products fame lived. Glass and granite adorn the building showing sparkling interiors but hospital waste is stacked along one wall which a kindly breeze blows onto the road and into the next house, every once in a while. Parking becomes tougher than ever with cars stealing whatever parking they can from the residents of the road. Almost every day, entering ones own home becomes a battle of frayed nerves.

And as for the sewage, how does a small little street with sewage lines laid in British times take this sudden influx of excess sewage? Well, the first rain brought the sewage up in the residences along the road. Backyards swam with rotten food and plastic packets which had been shoved down sewage lines instead of being removed by garbage collectors.

Desperate calls to the BWSSB and you are told in a nonchalant tone ," Madam! If the sewage is within your compound do not call us. We only take care of problems on the road." Plumbers are being called in and they are making money hand over fist. And the same BWSSB men will clean the inside of your home if you give them 1000 or more rupees as bonus. The dirt by the way is sewage and filth which is not yours in the first place.

Hospital in the neighbourhood is meant to be a good thing. Pic: Marianne De Nazareth.

Of course we Bangaloreans are happy with progress. Of course we would like our city become the Singapore of India but, and a very big but – will the real infrastructure keep up? Will the city fathers take action to make it work?

Six inch sewage pipes laid in the time of the British need to be changed, underground parking has to be made mandatory for every new building. Don’t expect the infrastructure to work unless it is upgraded. Infrastructure does not mean just broader roads and cutting down of defenceless trees. Infrastructure is a heck of a lot more.

It’s time we peace loving Bangaloreans woke up from our slumber and took a closer look at whats happening around us in the name of progress. We need to force the hand of those issuing permits to new establishments, to ensure that they make parking arrangements within their own buildings And, before permits are given, sewage, garbage and water issues have to be sorted out. Only then can living in the city not turn into the nightmare it has become at the present. ⊕

Suresh Jayaram, an independent visual artist put together a visual art exhibition as a tribute to G H Krumbiegel who adorned Bangalore with trees and flowers. The exhibition was held from April 16th to 30th.

The residents of Brigade Millennium Enclave, are strongly opposed to the proposed widening of the already wide private internal road called “Millennium Avenue”, saying it will cause serious safety problems.

Why Bengaluru’s voter turnout cannot be so low

Low voter turnout shames India’s IT city Bangalore states NDTV and others nod in agreements. The authorities, politicians, noted citizens, all are aflame criticising the citizens for not participating in the elections. Newspaper have used