Residents of a few Sobha apartments in Bellandur have challenged the imposition of annual fees on apartments that operate STPs (Sewage Treatment Plants). According to rules of the state pollution control board (KSPCB), apartments that own STPs have to pay an annual CFO (Consent for Operation) fee.

STPs are mandatory for apartments with area more than 20,000 sq mt in non-UGD areas. These apartments are treated on par with the most polluting industries, categorised as ‘Red’ industries (Orange and green are the less polluting industries). The CFO fees for these industries depend on the capital investment in the project. Depending on the investment, the annual fee can be anywhere between Rs 200 and Rs 2 lakh. There are 14 slabs depending on the range of investment. For instance, industries with investment of Rs 25-50 cr have to pay annual CFO of Rs 50,000.

Residents’ worries are not restricted to Bellandur. A major apartment in Marathahalli has now received a notice from KSPCB asking them to pay arrear amounting to Rs 1.5 lakh (Rs 75,000 per year) for the years 2007 and 2008. The apartment was occupied in 2007. "In 2007 and 2008 we paid Rs 250 annually. KSPCB started collecting the revised rates since 2009 only," says a resident of the apartment. The apartment owners’ association has now responded to the notice saying that they are not liable to pay the arrears. 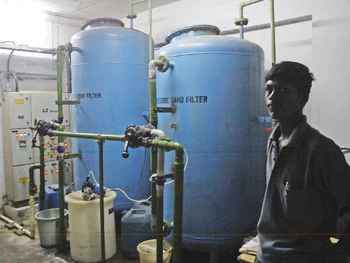 A sewage treatment plant at the basement of an apartment off Sarjapur Road. File pic: Meera K.

The categorisation of major apartments under Red industry was done in 2004 by the central government. Before this, all apartment complexes paid only Rs 250 per year as CFO fees.

Citizen Matters is in possession of a letter sent two weeks ago by residents of Sobha Hibiscus apartment, Bellandur, to the KSPCB Chairman raising concerns about the fee. The letter says that apartments should be given incentives rather than being penalised for processing sewage.

It says that independent houses and small apartments do not pay STP charges. Their sewage is treated at BWSSB’s common STPs, for which BWSSB pays at the rate of Rs 250 per 50,000 people annually. This cost is levied as part of property tax, which is shared by the entire city, including apartments which own STPs. The average apartment may have about 1000 people, but may have to shell out Rs 30,000 or Rs 50,000. Houses in non-UGD areas let out their sewage directly into lakes and are not penalised.

The second contention of residents is against charging apartments based on capital investment. A luxury apartment may be charged much higher than a regular apartment even though the number of people and sewage generated in both buildings may be similar. If at all a fee is levied, it should be on the basis of quality of STPs – lower fee for costlier, efficient STPs and higher fee for the cheaper ones, says the letter.

Residents are also questioning the basis for collecting the fee itself. KSPCB bases this on central government’s Water (Prevention and Control of Pollution) Act, 1974. "The Water Act does not empower KSPCB to charge fees. On RTI queries, the Board could not furnish documents that justify the fee; the amounts were fixed arbitrarily without public consultation or expert opinion," says the letter. Apartments being clubbed with red industries is another issue – red industries include ports, nuclear plants etc; apartments have to be distinguished from them, point out citizens in their letter.

In the meantime, a rethink on the issue of regulating STPs is on at KSPCB. The citizens’ letter is likely to speed things up. K M Lingaraju, Senior Environmental Officer says, "KSPCB is now considering grouping residential complexes into a separate category rather than with industries. There is also a proposal to consider the quantity of sewage for deciding the fee."

Lingaraju points out that the classification of large apartments under Red category is as per a EIA (Environment Impact Assessment) notification of the central government’s Ministry of Environment and Forests (MoEF) in 2004.

He adds that KSPCB has no powers to amend the fee structure. "The Board can increase the period of validity of the CFO though. There is a proposal to increase the validity from one year to five years ie, the annual fee that is paid now can be paid once in five years. The proposal will be placed before the Board’s next meeting," he says. If KSPCB does this, it would mean a five fold drop in CFO fees.

Residents’ demand is that CFO fee for all domestic STPs should be distributed equally among all citizens. Apartments install STPs only because BWSSB has no resources to process that sewage. Hence they should be treated as public STPs, so that apartment owners are not burdened with high fees, says the letter.  ⊕

Theatre of the Absurd makes you think

Mumbai, we are with you