R Ashok, Transport and Home Minister, and minister-in-charge of Bangalore, recently announced that BBMP would try to create new playgrounds. While this is a welcome statement, it is unfortunate that BBMP is threatening to take away a portion of a century-old playground. 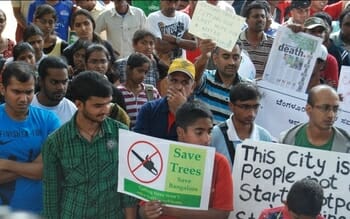 BBMP’s ill-advised Road-Widening plan will not only impact trees, homes and pedestrians but the century old Malleswaram 18th cross playground as well. Around 7 m – 12 m of the ground and the trees on one side of the ground will need to be given up if the road is widened. Malleswaram Playground has already shrunk since portions of it were given off to BWSSB, the CET cell and a few educational institutions.

Hundreds of people play cricket, football and several other games here. Cricketers as young as 6-8 years old practise in the nets here. This ground is the home for several sports clubs in Malleswaram. It is a public ground which is accessible to all at no cost and benefits several people. Section 8 of the Karnataka, Parks, Playfields and Open Spaces Act also clearly prohibits alienation of any portion of a play-field and also bars construction (other than those beneficial to the play-field) in play-fields.

Today between 9 am and 10 am, around 150 people including school-going cricketers and footballers, local residents, students of nearby colleges , members of the Disc and Football club and several others gathered to protest against the move of the BBMP to acquire a portion of the ground. The group was joined by several of the youngster playing in the ground this morning.

Renuka Prasad of the Disc and Football Club and Dr Meenakshi Bharath spoke to the gathering and requested those present to continue to join hands to save the ground. Those gathered were angered by the BBMP’s move to take away a portion of the ground. Amongst those gathered were people who have been playing in the ground since the last 35 years!

There were also 15 years olds, who have been playing football since the age of 5. The gathering condemned BBMP’s move to take over a public playground. In a city where public, free-to-use playgrounds are few, taking away one more playground will further push children to stay indoors, they said. The protesters held placards which read “Makkalinda Playground kadiyabedi (don’t steal playgrounds from children)” , “Ulisi, Ulisi, Playground Ulisi” , “Say no to road-widening, save our ground” and several others.

Road-Widening is of primary benefit to car-goers and hits pedestrians and cyclists badly. Taking away a portion of the ground to help car-goers, who might enjoy sports facilities at expensive clubs, is unjust.  It is shocking that in spite of several ill-effects of the road-widening plan, BBMP insists on going ahead with this plan, with the voices of the local people falling on deaf ears. What is needed is sustainable development which will help the most disadvantaged first and not hurt them. Road-widening helps a privileged few, that too only for a short while and harms the majority.

The next protest at the playground will be on Sunday, August 7 at 8.30 am. We will continue to campaign until BBMP drops this road-widening project and fixes a date for a public consultation to discuss the issue.⊕

About Vinay Sreenivasa 18 Articles
The author has not yet added any personal or biographical info to her or his author profile.

White form? Blue form? What is PID? How do you calculate the tax? All these questions are answered here in this property guide.

Karnataka goes to polls on April 18th and 23rd

Over five crore citizens from Karnataka are set to cast their vote in the Lok Sabha election.