With Zindagi Na Milegi Dobara, Farhan Akhtar takes off where he left us with Dil Chahta Hai and Rock On!!. But in this film, sister Zoya Akhtar (and not Farhan) takes the director’s chair. 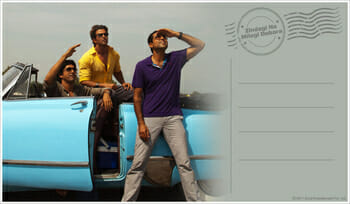 Like previous films from Excel Entertainment (Farhan’s production house), this is a film about friendship, love, life and letting go. It’s a journey of self-discovery, set in that twilight zone where boys finally become men.

Kabir (Abhay Deol) is engaged to marry Natasha (Kalki Koechlin). But before that, he is to have his Bachelor Party-a three-week road trip in Spain, with his buddies Imraan (Farhan Akhtar) and Arjun (Hrithik Roshan).

Spain is the beautiful backdrop for their journey. And as a friend observed on his Facebook status update, the film does make a good "promo movie for Spanish tourism". But good cinematography aside, Zindagi Na Milegi Dobara’s strength lies in the freshness of its dialogue and not originality of script.

Like in Dil Chahta Hai, these are real characters, with lines scripted right out of life. But while this could easily have drowned the film in a sense of déjà vu, the script is saved by a wicked sense of humour. When Zindagi Na Milegi Dobara works, it’s because the film is genuinely funny. Backed by production values that raise the bar for international cinema, it is always eminently watchable.

Actors Abhay, Kalki, Farhan, Hrithik and Katrina also rise superbly to the occasion. Audiences will all have their own personal favourites amongst the three male protagonists. Mine was Farhan Akhtar-here he goes exploring a new dimension as an actor after Rock On!!, Luck By Chance and Karthik Calling Karthik.

If anything lets us down, it’s the music from Shankar-Ehsaan-Loy that fails to live up to the soaring spirit of the film. Missing also is the chemistry of friendship between three buddies, expected in films of this genre, which still has Dil Chahta Hai as its brightest star.

Yet even if she fails here, director Zoya still manages to get her well-etched characters carry the story through. You know how the story will begin and end, but you can’t help rooting for Kabir, Imraan and Arjun all the way. In this way, Zoya lives up to the early promise that she showed us in her debut film Luck By Chance.

With Zindagi Na Milegi Dobara, the wheel also turns full circle for Excel Entertainment. The new wave of film-making in Hindi cinema that began with Dil Chahta Hai has since evolved and matured. Since then, directors of different convictions have been encouraged to make films like Jhankar Beats, Jaane Tu Ya Jaane Na, Rock On!! and Delhi Belly. Each of them intelligently made films that acknowledge the reality of young urban India. Zindagi Na Milegi Dobara is another milestone on this journey.

So I’ll go with a rating of 3 on 5 for ZNMD. It’s youthful, refreshing and never loses its sense of fun. Even when it’s predictable, you are still raising a toast to life.

Dengue numbers up, as rain continues to lash Bangalore

Despite media reports about the rise in dengue cases in Bangalore, doctors say there is no need to panic. BBMP claims the surveillance has been stepped up and no dengue deaths reported so far in the city this year.