Bangalore Club for Kathakali & the Arts, a non-commercial organisation focusing on the preservation and promotion of Kathakali and other classical art forms, brings to you an evening of Kathakali Padam (Kathakali songs) first time in Bangalore by acclaimed singers Pathiyoor Sankarankutty and Kottackal Madhu. 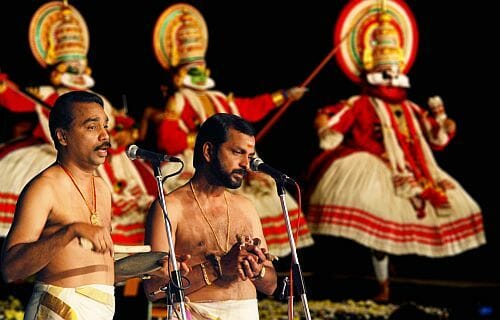 Pathiyoor Sankarankutty learned music from his father, the renowned Kathakali singer Late Shri. Pathiyoor Krishna Pillai. He passed Ganabhooshanam from RLV Music College, Thripunithara and subsequently joined Kerala Kalamandalam for training in Kathakali music. Pathiyoor’s mellifluous rendering of padams with elaborate bhava has made him a veteran in this field. Pathiyoor has been conferred with several awards including Kerala Kalamandalam Award in 2009 and Fact Chandrasekharan Smaraka Award in 2011. Pathiyoor Sankarankutty currently heads the Kathakali music at Sandarsan Kathakalividhyalam, Ambalappuzha.

Kottackal Madhu is a Sopana music singer and composer from Kottakkal, Kerala, who specialises in Kathakali music. Madhu joined P S V Natyasangham to learn Kathakali music after initial lessons of music from Parameswara Iyer. He later became a senior faculty member at the P.S.V Natyasangham. He has composed music for several Kathakali performances and also toured Switzerland with the P.S.V Natyasangham group. He was conferred with the T.V. Kochaniyan award, constituted in memory of the former chairman of the Kerala Kalamandalam, to encourage young artistes.

The language of the songs used for Kathakali is called Manipravalam. Though most of the songs are set in ragas based on the microtone-heavy Carnatic music, there is a distinct style of plain-note rendition, which is known as the Sopanam style.

These artistes will be accompanied by Kalamandalam Krishnadas on Chenda, Kalamandalam Rajnarayanan on Maddalam and Thripoonithura Hari on Edacka. The Kathakali padam concert is happening on August 6th, 2011 at the G M Rejoyz, Malleshwaram, 6 pm onwards.

Since there is no longevity of female stars, the will to challenge the status quo and transform the current environment for a better tomorrow is lacking in the industry.

B.PAC’s newly launched A Billion Eyes program calls for organisations to focus on creating safe workplaces for the women of Bengaluru.

Celebrating the world of theatre, and theatre artistes

A series on celebrating World Theatre Day on 27th March.