‘The role of organic agriculture, whether in farming, processing, distribution, or consumption, is to sustain and enhance the health of ecosystems and organisms from the smallest in the soil to human beings’

Organic – the new mantra of today’s well being. It is the name given to food that is grown without using pesticides or chemical fertilizers and emphasizes using renewable resources for conserving soil and water. In addition, organic food is not subjected to radiation treatment and artificial colours and it is not genetically-modified. It includes everything from staple crops such as rice and wheat to vegetables, fruits, pulses, milk and more. 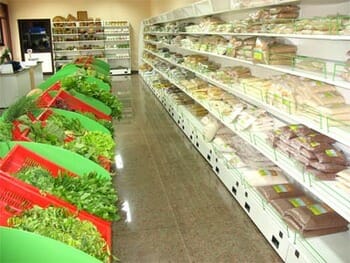 In organic farming, soil is enriched by natural methods such as rotation of crops, vermi composting, and use of natural manures like cow dung, agricultural waste material and natural pesticides like Neem. Consumers frequently buy organic food for environmental reasons and because they consider it to be more healthful.

It is claimed by health experts that organic food is more nutritious and flavour-rich. Some long-term users of organic products vouch for it. "I have no stomach upsets, gas problems, belching and many such minor issues. In fact, my thought processes have also improved!" says Aparna, an organic-only consumer.

Organic also have abundant anti-cancer agents. This makes one wonder, what are we eating then, in the name of conventional food..?! "Conventional produce being sourced into Bangalore are richly drenched with pesticides, growth hormones and what not", says a sourcing specialist of a retail chain in Bangalore, who wishes to remain anonymous. “They especially contain lead compounds and traces of Arsenic, which have long term ill-effects", he says.

"Lesser toxins, for sure" is why Veena shops regularly at one of the organic vegetables and fruits outlets in Bangalore.

A major drawback for going organic products could be the price, which is roughly 15-50 per cent higher. “Price and availability is an issue. No push-cart fellow selling organic stuff is coming to my door”, says Chaya Srinivas aged 52, who buys regularly from the local push cart vendors at Seshadripuram. Farmers who grow organic food have to meet stricter quality standards to have their products certified organic. More labour is required to achieve this, bringing up the cost. "But eventually, maybe we will spend less on doctors and health care" says another organic food consumer.

As Aparna Kumar, owner of Adi Naturals, a natural produce outlet at J P Nagar in South Bangalore points out, we need to use lesser portions of organic food to get the same volume. “For example, two cups of normal dal and one and half cup of organic dal will give you the same volume when cooked. This will compensate slightly for the price difference", she says.

Aparna is a Bio-technologist, who gave up her job at Biocon when she found her calling to set up this organic co-op along with her sister-in-law Vidya Sadanand, a psychiatrist by profession. These enthusiastic entrepreneurs in their mid thirties established Adi Naturals as a non-profit venture, and are now in the process of registering it as a co-operative.

Today, Bangalore is emerging as a major retail market, and well-heeled consumers do not mind spending the extra money for the sake of health. As Rashmi, a mother of two points out, "It is very much worth the extra buck. When we don’t mind spending extra for PVR gold class movie tickets or eating junk food, we should not crib about a mere 15% increase in the grocery bill". Interestingly, Adi Naturals had conducted a comparative price study of organic products and conventional products at the More retail chain and found that the difference in prices is not more than 10-12 per cent.

While certification is not mandatory for domestic retail, it’s a must for exports. Most organic produce from India is exported to European countries. A certified product would have its production process guaranteed by an accredited certifying agency. The quality assurance is displayed on the product packaging as a logo.

India is now working towards a certification regime and soon, an organic farming policy is expected to be in place. Certification though is not a one-time affair. It is a long-term understanding between farmers with small land holdings and a certifying agency, to be renewed every year.

Despite the tedious process of certification, farmers are increasingly entering the segment.

Apart from these stores, branded organic food and products like ProNature, Navadarshanam, etc., are available at most super-markets around the city.

There are about 15,000 certified organic farmers in India, according to figures quoted on various websites. But there are as many small farmers growing food and grains organically. These farmers are successfully selling their products through the help of NGOs or community centres. “Group certification works out cheaper for these small farmers. So they form small groups or co-op societies and go in for certification", explains Ramaswamy, manager of Jaivika mall at Labagh, a Karnataka government initiative.

The government has already initiated a project wherein every district/taluk will have 50 to 80 hectares of ‘organic village’ where only organic food is grown. Thus, within the next two years, almost 150 taluk and district centres will have organic outlets. “Maybe the enhanced supply will bring down the prices slightly", feels Ramaswamy.

Also, organic consumers know that all organic vegetables and fruits cannot look similar. Tomatoes, for example, will not all have the same or perfect shape and colour, but will taste the same. “Do not ask for all perfectly shaped bananas or tomatoes the exact shade of crimson", warns Aparna of Adi Naturals.

How can we help?

Organic food is also based on the principle that social and environmental sustainability are inextricably interdependent. What begins at a food level leads us into being concerned about the water we drink, the clothes we wear, and the fuel we use for the car. The idea of organic extends to different spheres of existence, thus becoming a way of life.

As Aparna rounds it up very well, we should stop thinking about the price as a barrier to consume organic food. It is something we need to do to give back to the community and nature. “Let’s be responsible and responsive in this regard. Organic is a way of life", she says emphatically.

The best we as consumers could do is to buy local, seasonal produce, striking a balance between organic and non-organic sources. A little enquiry around the place will surely lead us to an organic produce seller, or someone who knows an organic farmer. Just like other products, organic products are also priced differently in different stores. Ultimately, the choice is with us. ⊕

About Divya Sharma 13 Articles
The author has not yet added any personal or biographical info to her or his author profile.

It is not for nothing that Bengaluru is a leading medical tourism destination in the country. A pool of talented specalists doctors in the city’s major hospitals are lining up noteworthy accomplishments at the state and national levels.

Moods in the rain