The two-day festival will have an eclectic mix of artistes both local and national.
Residents of north-east Bengaluru will be treated to a classical music extravaganza with Whitefield Music Festival kicking off is first edition this Saturday, 9th July. The two day event, spread over the weekend will see a wide variety of performances from artistes at Jagriti Theatre in Whitefield.

The event is being organised by Whitefield Music Circle, a group formed by residents of Whitefield. The concerts will be held between 4 – 8pm. 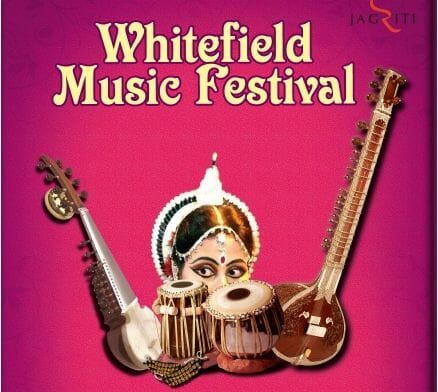 Manoj Pai, one of the members says, "we felt that this side of the city lacked in music concerts organised at this scale, so we are trying to promote music concerts of Hindustani and Carnatic styles in the Whitefield area. We are planning to make this an annual event" says Pai.

The festival will be inaugurated by MLA Aravind Limbavali. Pai says they have tried to include artistes from Whitefield area. It will kick off with a Tabla solo by Nishikant Barodekar, grandson of vocalist Hirabai Barodekar. He has trained under acclaimed tabla maestros such as Ustad Allarakha and his son Ustad Zakir Husain and has recorded for major Bollywood films like Devdas, Saaz, Agnivarsha and some Hollywood films like 39 Steps to Hell and Miss Beatty’s Children.

The Tabla solo will be followed by a Hindustani vocal concert by Rina Basu. Based in Whitefield, Rina Basu has been performing regularly as a  B High Grade Artist of All India Radio and Doordarshan for more than 21 years. Presently she is under the tutelage of music maestro Pt. Vinayak Torvi of Gwalior and Kirana Gharana.

A Violin solo by Biswajit Roychowdhury follows next. Roychowdhury has accompanied many acclaimed musicians such as Pt. A T Kannan,
Ustad Masqur Ali Khan, Padmabhushan Srimati Girija Devi and Guru Kelu
Charan Mahapatra. He has also accompanied his own Guru Padmabhushan Pt.V G Jog in many concerts.

Day two will feature an Odissi performance by Madhulita Mohapatra who has
received her Nrutya Acharya from Orissa Dance Academy, Bhubaneswar,
and Nrutya Shastri from Orissa Sangeet Natak Academy.

A vocal concert by Abhijit Shenoy is next. Shenoy started learning music from his grandparents and parents and then Gwalior Gharana shaili from Pt.Harindra for 23 years. A B-grade artist of All India Radio, Abhijit has received the Aryabhatta award and Yuva Chandrahaasa Purasakara.

The festival will close with a Jugalbandi perfromance of Prabir Bhattacharya on Sitar and Subhrata Chatterjee on Sarod. Bhattacharya began training under the tutelage of the international acclaimed Sitar Maestro Pt. Deepak Choudhury (one of the senior-most disciple of Pt. Ravi Shankar).

Tickets are priced at Rs 250 per day. To book tickets please visit www.bookmyshow.com or call Jagriti at 080-41242879.
For more details visit http://www.whitefieldmusicfestival.org/⊕

Much ado about Dhanvantari park

The move to install an idol of Dhanvantari and a shelter for the same in a JP Nagar park, has become a controversy. This and more updates from JP Nagar in the last fortnight.

Here’s an opportunity to get rid that old oven or that saree that you haven’t used for ages and get something you love.

‘My loyalty is to my conscience and my nation not party’