BBMP demolished the disputed 400-metre-long compound wall of L&T South City in Mico-Arekere layout on Thursday morning (9 June) and threw open the 60-feet road going through the compound to the public, amidst protests from residents. This, even as cases are pending in the court between residents, builder L&T and original land owner Dinesh Ranka.

Residents had alleged in the court cases that the builder and Ranka had relinquished the 60-feet road and area including the compound wall to the BDA, without their consent . BBMP had earlier made markings on the compound wall to acquire 30 feet of land along the length of the wall, for widening the road in front of the complex. Demolition was stalled due to the ongoing court cases. 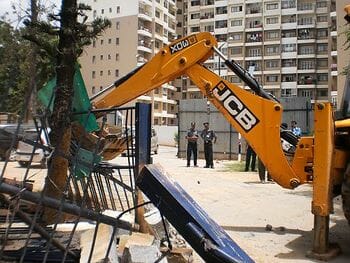 Demolition of compound wall at South City started at about 11 am on Thursday. Pic: Navya P K.

Shivabasavaiah, Joint Commissioner (Bommanahalli), who was in charge of the demolition, says that it was done on the basis of a Lokayukta order issued about a month back. But he did not have a copy of the order. Even with the residents agitating and demanding to see the order, none was shown.

Officials from the state police, reserve police, BMTF (Bangalore Metropolitan Task Force) and BBMP engineers from entire Bommanahalli zone were present at the site, but no one seemed to have a copy. When senior officials of the state police asked Shivbasavaiah for the order copy to appease the residents, the JC said that he would provide it later. When Citizen Matters contacted Lokayukta Justice Santosh Hegde, he said that Lokayukta only makes recommendations to the government and not an actual demolition order itself. 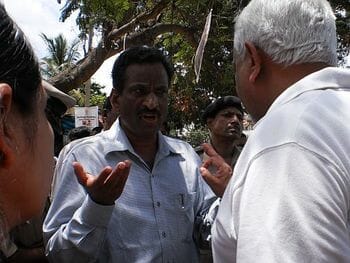 Ironically, the case at Lokayukta which led to the demolition was filed by residents themselves in March 2010. "L&T had threatened to open the road to the public. We petitioned the Lokayukta saying that even if the road was opened, it would only connect to a kuccha road going to Puttenahalli. It would only increase the congestion further as vehicles will use the road to enter Mico-Arekere layout," says T V Suneeth Kumar, Vice President of SUGRUHA (South City Group Housing Apartment Owners’ Association).

The association instead proposed that a public road be built along the side of their compound wall. This proposal was earlier considered by the BDA, but no progress was made on it. 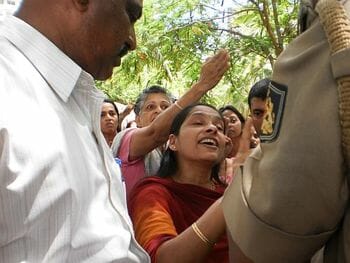 After the petition was filed, a meeting was held at Justice Hegde’s office with SUGRUHA, builder, BBMP and other residents of Mico-Arekere layout. Lokayukta official K L Anande Gowda held inspections and meetings after this and was supposed to submit a recommendation to the government on action to be taken.

Though the residents were the complainants in the case, they say they never received a copy of the Lokayukta report. "When we called the Lokayukta office a few days back, they said that they would inform us about the outcome. Hence we were not worried. It was only today morning that we realised that the report may have been already submitted," says Kumar. 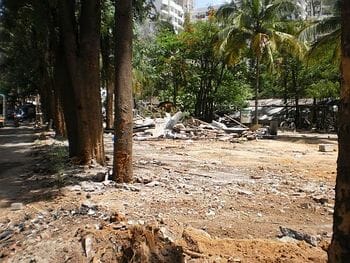 Post demolition and removal of debris. Residents are concerned about lack of security after wall demolition. Pic: Navya P K.

A BBMP official at the site, on condition of anonymity, said that BDA received the order about 15 days back and that the files were transferred to the BBMP only a day before the demolition. The disputed areas, which the builder had relinquished to the BDA, have now been transferred to BBMP, he said. However, Anande gowda said that the report was submitted to government and he was not aware of whether the government had further forwarded it to the BDA.

When asked whether residents were notified about the demolition, Shivbasavaiah said that the area was already public property and that BBMP was not answerable to the residents. "We did not touch their homes, so why should they react? Opening the road will benefit all public," he said. 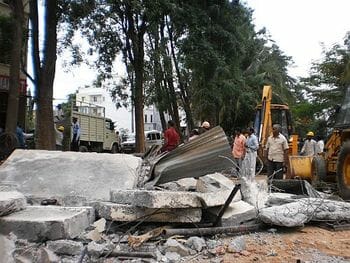 However it seemed many precautions were taken to avoid protests. Police officers said that the large police team was deployed to handle protests. Residents allege that all land phone lines in the apartments were disconnected before the demolition started. The demolition started at about 11 am, and a major part of it was completed with a couple of hours. Almost immediately outsiders were allowed to ply through the 60-feet road.

They also chased Raghavendra, Senior Project Manager at L&T who is in-charge of the South City project. Surrounded by the police for protection, Raghavendra said that a notice had been affixed at the common area in the apartment about demolition, but did not elaborate on its details. Residents say that no such notice was issued and that they would have obtained a stay already if they knew about it.

The disputed 60-feet road inside the complex was opened to the public as soon as the demolition started. Pic: Navya P K.

SUGRUHA now says that it plans to go to court. "While the case is sub-judice, demolition cannot be done. We have also submitted an application in Lokayukta for the copy of their report," says Kumar.⊕

Details of the Lokayukta’s recommendations

Citizen Matters has seen the copy of the Lokayukta’s recommedations, that BBMP referred to during the demolition.  Lokayukta gave its report on May 4 on two complaints – one filed by Arekere-Mico Layout RWA requesting opening of South City’s 60-feet road to improve connectivity, and the second filed by SUGRUHA in March 2010 saying that South City itself did not have further connectivity to JP Nagar as promised by the builder.

The Lokayukta order to Urban Development Department gives three recommendations:
– BBMP should remove the gates to the 60-feet road to open it to public and
– Widen the road in front of the complex by 30 feet, with funding from L&T
– BDA should withdraw the permission for the complex’s plan which was sanctioned in September 2006

The report says there was no justification for closing the 60-feet road – it was a road specified in Master Plan and L&T had already relinquished it to BDA. BBMP was asked to take over the road for maintenance by BDA. The report says that BBMP was already developing a road outside the complex to connect the 60-feet road to Puttenahalli. It also says that the 30-feet width of land along the compound wall was also relinquished, and BBMP should use it for road widening.

The third recommendation by Lokayuka – ie., withdrawing BDA permission for L&T’s building plan – is based on Zoning Regulation violations done by L&T. The violations are regarding FAR (Floor Area Ratio), approach road and setback. These parameters should have been calculated separately for each building block in the complex, instead they were calculated by considering the entire complex as one entity. Also the area that was ‘relinquished’ was also considered as part of the complex, with the effect that there are no proper approach roads and setbacks for individual blocks.

It also says that action should be taken by the government with a month of receiving the order and that Lokayukta should be intimated about it. But Justice Hegde says that he was not aware of the demolition plans.

SUGRUHA now says that they will challenge the demolition on the ground that the relinquishment was made as per the 2006 BDA sanction. "When Lokayukta says that the plan sanction itself was invalid, how can the relinquishment done as per its sanction be valid? Government has implemented Lokayukta’s first two recommendations, but not the third. Even after demolition, L&T is continuing construction," says R Rajagopalan, Vice President of SUGRUHA.

This is your chance to give your inputs, share your knowledge for setting problems that plague Bengaluru right. Committee on BBMP Restructuring seeks suggestions.

Simplicity of a cactus

From the Independence Day flower show at Lalbagh.